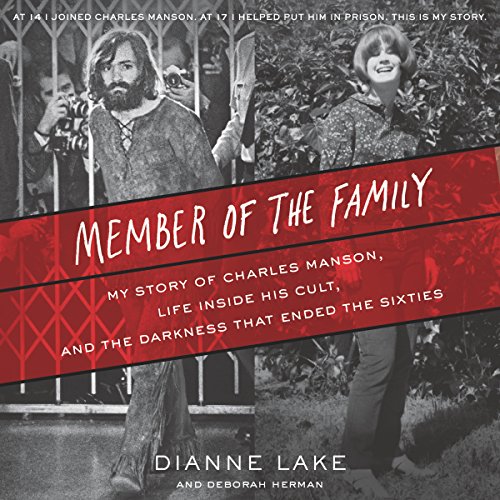 Member of the Family

In this poignant and disturbing memoir of lost innocence, coercion, survival, and healing, Dianne Lake chronicles her years with Charles Manson, revealing for the first time how she became the youngest member of his Family and offering new insights into one of the 20th century's most notorious criminals and life as one of his "girls".

At age 14, Dianne Lake - with little more than a note in her pocket from her hippie parents granting her permission to leave them - became one of "Charlie's girls", a devoted acolyte of cult leader Charles Manson. Over the course of two years, the impressionable teenager endured manipulation, psychological control, and physical abuse as the harsh realities and looming darkness of Charles Manson's true nature revealed itself. From Spahn ranch and the group acid trips to The Beatles' White Album and Manson's dangerous messiah complex, Dianne tells the riveting story of the group's descent into madness as she lived it.

Though she never participated in any of the group's gruesome crimes and was purposely insulated from them, Dianne was arrested with the rest of the Manson Family and eventually learned enough to join the prosecution's case against them. With the help of good Samaritans, including the cop who first arrested her and later adopted her, the courageous young woman eventually found redemption and grew up to lead an ordinary life.

While much has been written about Charles Manson, this riveting account from an actual Family member is a chilling portrait that recreates in vivid detail one of the most horrifying and fascinating chapters in modern American history.

What listeners say about Member of the Family


I found it interesting hearing what life was like for Dianne (Snake) growing up as a young hippie child in the 60s, but the part that drew me in the MOST, were the events after she joined The Family. I found myself hating to break away from the story (to do something else), and would often say - okay, just FIVE more minutes. Did that a lot. Lol.

There were MANY surprising little details that I never knew about, and over the years were wrongly attributed to Manson himself - or to others as having said or done. For me, THAT made it all worthwhile. It was great to finally hear something NEW in this case, and not simply the same old rehashing of events, but REAL everyday life at the ranch, and then some! Wow. Very pleased that I gave this one a shot.

I thought Dianne did a pretty decent job with the narration ... and in THIS instance, I WOULD rather listen to it straight from the horses mouth so to speak, than have some sing-songy storytime lady voice. If reading about the Manson case intrigues you, then this is a must-get. Some good juicy stuff in here :)

not quite what I had hoped.

I found too much of the book was pre Manson era and it took a long time before she actually met him.

Not great to listen to...

I’m a few chapters in on audible and I’m not thrilled by the narration. I️ understand it’s her story, but she’s just not the right person to narrate.

I just finished re-reading Helter Skelter and was looking for another book about the Family and Manson. This is a great story. The author also narrated the book. She was a bit shaky and at first, I thought it was going to be rough listening to her through the whole book, but as it went on, it was easy. I appreciated her story and grew to love her by the end. The story left me in tears. It's terrible that she was so young when she went through all of this, but I think that because she was so young, she wasn't so far lost that she couldn't come back. Great story. Great book.

I always wonder what happened to the others. This is a great account of life before the Family, especially how she came to be a member. Its a great account also of life inside the Family from an actual member. She was not a killer but was very close to those who were. Its also a great telling of how she came out the other side. Narration was ok. She is not a professional obviously but I appreciated her personal telling. I thought it might have been a bit cathartic for her. What's great about her story is that she had nothing to gain and quite a lot to lose. I think it is very brave for her to tell her story.

Why Some Authors Shouldn't Read Their Own Work

I appreciate that this is a first-person account from one of the women who lived with and through the Manson years. The story demonstrates just how manipulative Charles Manson was and the process this one woman, a girl at the time, experienced as a result of being more or less abandoned by her self-indulgent parents and, as fate would have it, being found by Manson when she was young and impressionable.

That said, the narration is hard listening at best. The author's voice is almost completely devoid of emotion or nuance, and any music of tone or intonation is completely lacking. Perhaps after her experiences in the Manson cult, it is impossible for her to speak about them in anything other than a remote fashion, but the narration had the same stilted feeling as a fifth-grader reading a paper in front of the class. I found myself appreciating this style only during the descriptions of her most lurid and horrific sexual experiences, but it was hard to feel anything more about her or her experience since her affect was so flat. I would probably have felt more emotional connection to the author if the book had been read by a more experienced narrator.

The book begins a bit slowly, but the background info Dianne Lake gives is an integral part of her story. Once she gets into her tale of life with Charlie and the girls, it is fascinating in a train wreck kind of way; hard to listen but harder to turn away. As mother of a teen who is about the age she was when she joined the Family, it's horrifying to hear how her parents allowed this to happen. I applaud the author's courage and honesty in revealing her story. I give the performance only three stars as her reading is generally monotone even when describing the most disturbing experiences but I believe this is common for people who have dissociated themselves from a trauma. Highly recommended for anyone interested in 60s counter culture

A must read for anyone interested in The Manson Family.

There are so many books about the Manson Family, but this insider’s perspective is truly unique.
It is clearly written. The author does the narration herself (something that I always appreciate). And you get a first hand glimpse at how someone could get wrapped up in all of this Charles Manson craziness.
Additionally- the author dispels incorrect information repeated in almost every book about this subject. A truly fascinating audiobook.

I have to say that I was pleasantly surprised with Dianne Lake’s ability to tell her story after so many years. She comes across as intelligent, insightful, remorseful for just being a part of the Manson family, and she clears up and adds so much more information into what life was like as part of Manson’s girls. Her life before Manson was heartbreaking and her innocence, even after all the sex and drugs, came across in her interactions with Manson, the other members of his cult, the police, and others she met along the way. The abuse she experienced from her grandfather was horrible and utterly sad. And then to experience further abuse at the hands of Manson and other men is so maddening and shattering that it’s a wonder she turned out as well as she did at the end of those neatly three years.
If you want a first hand account told honestly and openly, then read/listen to this book. After listening to Helter Skelter years after reading it back in my teens, I have a better understanding of Manson’s control over the people in his “family” and how some of them found themselves doing heinous, murderous acts. It doesn’t excuse them because in the end the all had a choice and they chose to kill because they wanted to as is clear by Linda Kasabian refusing to make that fateful, life altering choice. But hearing this first hand account puts things into perspective and I can better understand the control Manson had over the “family” even with some members who had previously led normal lives and had good childhoods.
Excellent story, excellent narration.

Here are all the interesting details and nuances of what life with the Manson family was really like...

Dianne’s story, and her way of telling it, was so sincere and captivating. I’m sure I’ll listen to this one again, but I am jealous of anyone who has yet to experience “Member of the Family” for the first time. I’m sure it would be a great read as well, but I think you’re missing out if you don’t listen to the Dianne reading her own (unbelievable!) story first hand.