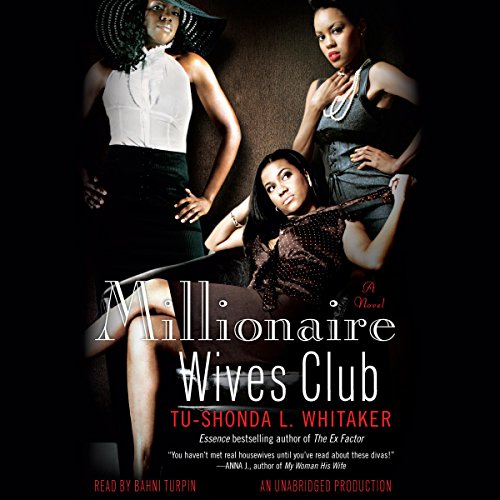 Evan: Married to a pro-football star who isn’t in love with her anymore, Evan is digging her freshly manicured nails in ever deeper as she fights to keep the husband who loves someone else.

Milan: Half Dominican, half Black, and beautifully exotic-looking, Milan is watching her has-been husband’s fortune fade fast - while her romantic attachment to Evan’s husband is heating up.

Jaise: Divorced from a former boxing star who’s now married to a white woman, Jaise is trying to raise her 16-year-old son on her own. Will her huge alimony checks keep her from falling in love?

Chaunci: Editor of the hottest Black women’s magazine, Chaunci is now engaged to the high-powered man who helped finance her magazine when she was just a struggling single mom. But when a onetime passionate flame reignites, Chaunci may not be able to resist its charms.

When these starlets’ private lives run as wild as their emotions, their relationships with one another inevitably turn into high-profile catfights. Through it all, the cameras never stop rolling on TV’s guiltiest pleasure, where power - and diamonds - are always a girl’s best friend.

Not sure how explain this. There were alot of parts that were extremely funny but even for fiction, alot of this storyline was just unbelievable. More "foul" language than neccessary which too me, seemed to exist only to fill up word space. Listened to til the end but definately not a repeater.

OMG I WANT NY CREDIT BACK!!!!! I LITERALLY LISTENED TO 2 MINUTES OF THIS CRAP AND HAD TO CUT IT OFF. I HAVE A FEW NARRATORS THAT I CANNOT LISTEN TO. BUT THIS NARRATOR IS #1… THESE AUTHORS AND PUBLISHING COMPANIES OR WHOEVER NEED TO DO A BETTER JOB IF PICKING NARRATORS. THIS CRAP WAS HORRIBLE

It was as though I were watching it on television!

I love everything about this audio book! The Script, The performance and the MORALS OF THE STORIES! we’re absolutely entertaining and amazing! I loved it !

I always love when Bahni Turpin narrates! Good story lines! All of the wives have something that relates to real life in some level.

I really liked this book and would recommend it. I would have given it 5 stars if not for the use of God's name in vain by the author. You don't have to use "GD" to have a great book. It had a great storyline and sexual storylines.

These ladies and their lives were crazy. I laughed. hot mad and cried. Evan was said. Lollipop and his woman was crazy, I knew the cop was loaded.

love love love this book and author!!!! I can't wait to read the next book

Hilarious and keeps you on the edge of your seat!

Would you listen to Millionaire Wives Club again? Why?

Yes I would. This book was very funny and I really could not stop laughing on a lot of the parts. I would listen again because the second time around, the listener would have a different experience now that they would know the characters more. It took a minute for me to get all of the characters down, so I had to go back a few times.

What other book might you compare Millionaire Wives Club to and why?

I would put it in the category of urban fiction, but I enjoyed it more than I usually would, because it's not my usual type of books. But this kept my attention!!

I LOVE Bahni Turpin. Hands down, she is my favorite narrator. I am always in awe and impressed with her narrating skills, and the range of characters and emotions she's able to play. Most of the books I have listened to by her were more serious (Civil War era), so it was sooo funny and different to hear her narrate this story, swear words and all! She really did make the book come alive. She's amazing.

I can't say without giving too much away- but let's just say- there are some plot twists!

This book was not what I was expecting. I normally don't read books in this category for fear they'd be overly raunchy for no reason, or poorly written. This book definitely exceeded my expectations. Surprisingly, I was hooked. I was invested in the characters and the plot. There actually was substance an a good story there! Well done, Ms. Whitaker!

Great book. This was a entertaining book. Very dramatic. Very funny but it had a few sad parts. I agree with the other reviewer on this book being a little to much when it came to reality. It could've been a bit more believable. But all in one. A great book and yes I'm getting book 2 NOW.

No matter how good a book is it takes the narrator to bring it to life and make you enjoy it all the more. Great job to the narrator. You are officially one of my favorites next to Nicole Small & a few others.

Great read, very entertaining! Can't wait to read the next one! Downloading it right now!

Reality TV at its best!

This book was just like Basketball Wives and it shows how producers set things up no matter the cost. I truly had some laugh out loud moments.