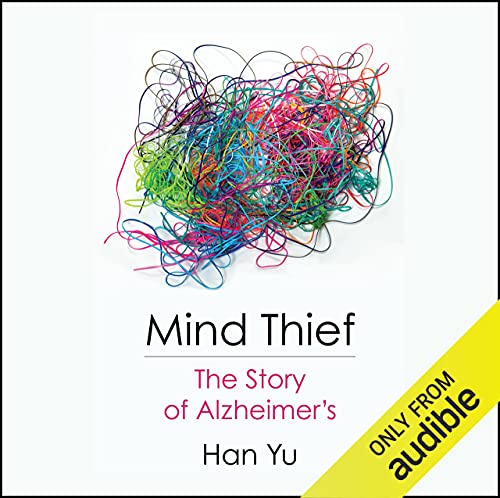 Written by: Han Yu
Narrated by: Cassandra Campbell
Try for $0.00

Alzheimer’s disease, a haunting and harrowing ailment, is one of the world’s most common causes of death. Alzheimer’s lingers for years, with patients’ outward appearance unaffected while their cognitive functions fade away. Patients lose the ability to work and live independently, to remember and recognize. There is still no proven way to treat Alzheimer’s because its causes remain unknown.

Mind Thief is a comprehensive and engaging history of Alzheimer’s that demystifies efforts to understand the disease. Beginning with the discovery of “presenile dementia” in the early 20th century, Han Yu examines over a century of research and controversy. She presents the leading hypotheses for what causes Alzheimer’s; discusses each hypothesis’s tangled origins, merits, and gaps; and details their successes and failures. Yu synthesizes a vast amount of medical literature, historical studies, and media interviews, telling the gripping stories of researchers’ struggles while situating science in its historical, social, and cultural contexts. Her chronicling of the trajectory of Alzheimer’s research deftly balances rich scientific detail with attention to the wider implications. In narrating the attempts to find a treatment, Yu also offers a critical account of research and drug development and a consideration of the philosophy of aging. Wide-ranging and accessible, Mind Thief is an important book for all listeners interested in the challenge of Alzheimer’s.

What listeners say about Mind Thief

This is a great book! My grandmother was diagnosed with this illness 9 months ago. It is such a sad disease. I really liked how Han Yu, the author did so much research on this disease, and all the history of trials and tribulations from diagnosing and treatments that have been tried over the course of many years.

I got this audiobook because Alzheimer’s Disease is a topic that affects our family and I wanted to learn more about it. I was pleasantly surprised that the information was presented in such an engaging way for a non-scientific person like myself. The science behind the disease and the search for a cure is presented in terms that I could easily understand. Mind Thief addresses a serious topic in a way that was interesting and enjoyable to listen to.

I have not actually even finished this book yet but am so impressed at how this author was able to make such a relatable story out of a horrible disease and put it in laymen’s terms so it remained interesting and keeps you listening, waiting for more. The performance is excellent also! Highly recommend.