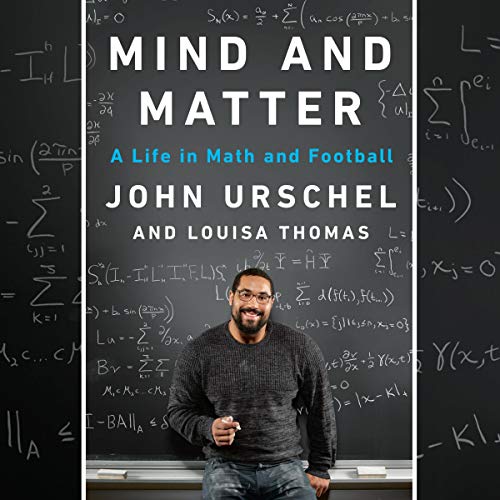 John Urschel, mathematician and former offensive lineman for the Baltimore Ravens, tells the story of a life balanced between two passions

By the time he was 13, Urschel was auditing a college-level calculus course. But when he joined his high school football team, a new interest began to eclipse the thrill he felt in the classroom. Football challenged Urschel in an entirely different way, and he became addicted to the physical contact of the sport. After he accepted a scholarship to play at Penn State, his love of math was rekindled. As a Nittany Lion, he refused to sacrifice one passion for the other. Against the odds, Urschel found a way to manage his double life as a scholar and an athlete. While he was an offensive lineman for the Baltimore Ravens, he simultaneously pursued his PhD in mathematics at MIT.

Weaving together two separate narratives, Urschel relives for us the most pivotal moments of his bifurcated life. He explains why, after Penn State was sanctioned for the acts of former coach Jerry Sandusky, he declined offers from prestigious universities and refused to abandon his team. He describes his parents’ different influences and their profound effect on him, and he opens up about the correlation between football and CTE and the risks he took for the game he loves.

Equally at home discussing Georg Cantor’s work on infinities and Bill Belichick’s playbook, Urschel reveals how each challenge - whether on the field or in the classroom - has brought him closer to understanding the two different halves of his own life and how reason and emotion, the mind and the body, are always working together.

“So often, people want to divide the world into two”, he observes. “Matter and energy. Wave and particle. Athlete and mathematician. Why can’t something (or someone) be both?”

“[Mind and Matter] follow[s] Urschel through the academic and athletic rigors that expose the sharp contrasts and surprising connections between the two passions that shape his life - one taxing his brain with proofs and calculations, the other toughening his muscles with gridiron competition. The candid narrative conveys both the intellectual excitement of mathematically formulating the irregularities of an asteroid’s orbit and the physical trauma of sustaining a concussion in blocking a blitzing linebacker. A piquantly improbable memoir.” (Booklist)

“The most creative people are those who can embrace very different disciplines: Einstein loving music and physics, Leonardo da Vinci with his art and engineering. John Urschel, in this delightful memoir written with Louisa Thomas, describes his passion for both football and mathematics. He makes Joe Paterno’s fall and Newton’s three-body problem of moving objects equally interesting. But this book is about something much deeper: the importance of grit and determination in all fields of endeavor. Urschel has mastered that in his life, and he can inspire all of us to do so as well.” (Walter Isaacson, author of Leonardo da Vinci)

Every 10th or so Audible book, I absolutely hate when it ends. This was one of them. As a big football fan (Patriots alas) and a father of a Penn State grad when Urschel was there, I totally understood his love for football and for Happy Valley.

With an engineering background and current data analytics focus, I loved the math so much that I pulled out some of my old favorite books to review.

I usually prefer the author to read but Jones did an awesome job as well. Totally recommend. We are!

Fascinating blend of math and football

We often hear the term dumb jock. John Urschel was certainly no dumb jock. This book is an odd blend of football and mathematics. If you are not interested in both math and football, then this book may not be for you. I am an engineer who loves some theoretical mathematics, and I am a football fan, so this book intrigued me. John does go into some brief descriptions of high-level theoretical mathematics, so you definitely have to have an interest in math to enjoy this book. I think it is wonderful that someone could give up the potential to earn millions of dollars in order to pursue his love of mathematics.

you can have it all, up to a point!

loved this book! compelling story about the simultaneous pursuit of two incredibly difficult professions. if you love either math or football you'll love this book.

I enjoyed this book more than I’d thought I would.
I listened to the book as an Audible book over a 2-day period of time. When people would talk to me I'd pause but was anxious to get back to it. I drove; I listened. I exercised at the gym; I listened.
The book seemed like a conversation with someone I admired and wanted to know more about.
When I was finished I sent a copy to a relative.