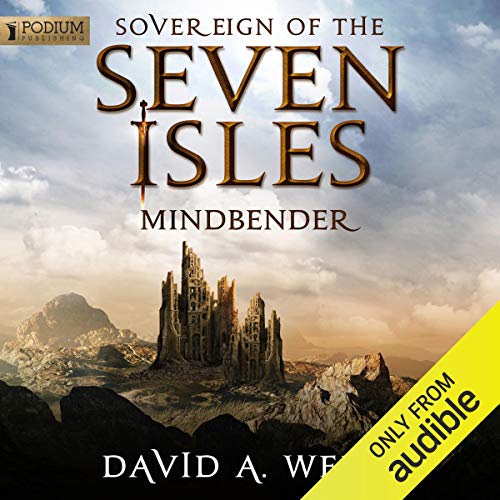 Written by: David A. Wells
Narrated by: Derek Perkins
Try for $0.00

War has erupted across the Seven Isles. Alexander has recovered the Sovereign Stone, and much to his surprise, it has bonded to him, revealing the truth of his bloodline and his duty. He is the Seventh Sovereign of the Seven Isles and champion of the Old Law.

Fleeing the wrath of Prince Phane, Alexander has traveled through the Reishi Gate to Ithilian in search of an alliance, only to discover that Ithilian is facing the threat of invasion as well.

Alexander struggles to bring the army of Ithilian to his aid while secretly searching for information about his unique magical calling, information that he desperately needs if he is to have any chance against Phane. What he finds is beyond anything he imagined.

What listeners say about Mindbender

Lame but yet oddly gripping

Fabulous narration by Derek Perkins. MINDBENDER is a fantasy novel with pervasive romantic elements. PG-13: no explicit sex, no cussing, but numerous bloody battles and some necromancy. I'd almost go 3 stars for this somewhat engrossing story but the writing style is quite lame: unsophisticated, repetitive, and pedantic (completely lacking in nuance and subtlety).

Told in 3rd person, the tone of these books felt strange to me: a disconcerting mix of intensely grim and excessively joyful. In the midst of seriously creepy danger, a character suddenly feels "pure joy" and "mischief" — these emotions felt forced and jarring, because they didn't fit into the dark scene.

The villain Prince Phane Reishi is flat, boring, and mostly off stage, but I am interested in the evil King Zhul. He's got a credible backstory and seems authentic.

This book, like the first two, is carried along by its pace. Rarely a dull moment. Scary monsters, those vampire-like revenants. However, the overall plot felt weaker in this book than it did in the first two books, mainly because it felt exactly the same. In book one, Alexander had to find a magical artifact called Thinblade. In book 2, he had to obtain the powerful sovereign stone. In this book 3, he had to find Mindbender. In all three books, he had to gain access to an ancient magical stronghold. In each book, Alexander and his friends are constantly attacked, always managing to escape death by a hair, their grievous wounds healed with a tablespoon of tonic.

Negatives: The author's writing style requires improvement in my view:
1) THE TONE felt slightly preachy. Examples: The hero repeatedly dwells on how it's wrong to kill and then he justifies his kills via the Old Law. This felt like the author was trying to teach me a moral about righteous murder. In addition, the text includes several simplistic proverbs about life (teachings Alexander learned from his "dad" in childhood). Another area that felt sermonizing: the hero's frequent internal rants against government officials, all those corrupt "petty nobles" — I got a strong libertarian vibe from this author.

2) SUBTLETY: Wells leaves nothing to interpretation — he spells out each new step in the plot and is careful to highlight the good nature of each protagonist (because we couldn't figure that out by what they did?). The author reveals far too many of the hero's thoughts and feelings, REPEATED numerous times. The hero is far too good, and we are constantly told that he is "worthy" — in not so many words.

3) DIALOGUE: The dialogue is not clever or witty or wise. It is rather vapid and quite REPETITIVE. For example, Chloe always calls Alex "My Love" and he always calls her "Little One" (ad nauseum!). The body gestures are also vapid and repetitive: "he looked him in the eye" and "he saluted fist to heart" (once we hear how they salute, we don't need to be told each time. It felt like Wells repeatedly used that type of salute to emphasis that these are "good" people. Silly. Anyone can salute "fist to heart" (and still be deceitful). Jattan always stands at attention with his hands clasped behind his back. Why do we need to be told this repeatedly? I get the picture.

4) VOCAB: Alexander referred to his parents as "mom and dad" which pulled me straight into the 20th century, as did modern slang phrases like "man up" and "you guys" and "cocky grin". Scientific terms like "gravity" and "adrenaline" wouldn't have existed in a world without Isaac Newton or modern biochemistry. In this fantastical setting, it would make more sense to call gravity "the downward force" and to call adrenaline "terror-driven energy" or something similar.

I like the vivid descriptions, but they do go on too long.

Still, despite all these quibbles, I felt oddly compelled to read several books in the series, skipping some of them to get to the last book, and see how the series concludes. In the end, I feel these books were somewhat exhausting (so much death, so many demonic monsters) and not really worth my time. I doubt I'll read more books by this author, unless he improves his craft.

However, readers who enjoy this type of thing might truly love this series, especially if they don't pay much attention to writing style. I can understand all the positive ratings, in that perspective.

Great book, amazing series!
Enthralling and fantastically written. I have enjoyed everything from these books. This is a must read and or listen to book and series. Narration slipped here and than there but an overall great performance.

I honestly tried. I gritted my teeth through book one, rolled my eyes through book two. Had renewed hope for book 3 but towards the end I saw the writer slip back into old bad habits and just couldn't do it anymore. An audiobook is so much more than a story.

Awesome book. Really enjoying this series and ready to get to the next one today!

This series has it all!
Best fantasy I've read in a long while.
Don't be fooled by the occasional eye roll and YA type boiler plate fantasy.
The overall story is as good as any and better than most.

I love this series! I'm always sad when I've finished one of the books, at least until I download the next in the series. I do wish the author had given less similar names to Alexander's sister & wife. :D

Man!’ David A Wells continues to improve with every book. Places, People, Magic and More charged with his own unique Twist!’ Makes for a Wonderful read!’
I highly recommend it!’😄

I loved reading the books, but it is really great to listen to as well. the narrator is perfect and does a really great job.

awesome book and it was so cool to hear this amazing story. i recommend it for sure for lovers of sci-fi.