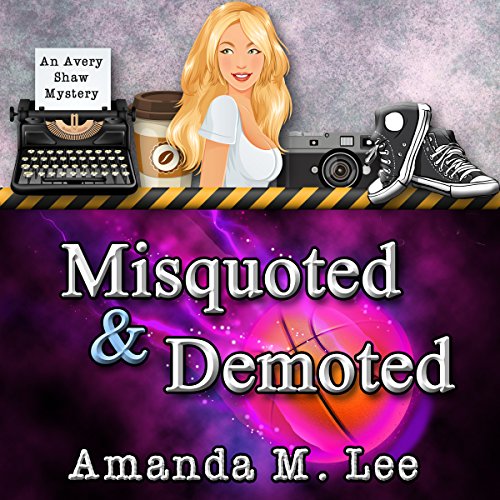 Avery Shaw's life is a mess - and that's putting it mildly. County Commissioner Tad Ludington is on the warpath, and his complaints haven't fallen on deaf ears. The new publisher is watching the staff - and Avery is of particular interest. As punishment, he's decided to bust her down to sports - and no one is happy about it. The sports editor hates her, and the rest of the staff is struggling to tolerate her. As for Avery? Her new world has sent her into a tailspin, and no one can console her - even her long-suffering boyfriend Eliot, who can't deal with Avery's depression (or constant attitude).

She desperately wants to chase the story swirling around the dead girl found on a high school's football field. Instead, she's forced to sit through wrestling meets and basketball games. She's not happy, and that means everyone around her isn't happy. No, to be fair, they're downright miserable.

When Avery's current assignment crosses paths with the story she wants to chase, things come to a head. There's a tangled web of steroids, obnoxious teenagers, and sketchy coaches to unravel. When you compound that with Grandpa and Mario's new business venture - they're running a traveling food truck and taking it to local high schools - Avery's tenuous grasp on reality is starting to fray.

Then there's that whole "Jake thing" - you know, how he told her he loved her when he thought he was dying - and Avery is also expending a lot of energy hiding from him. Can this long-suffering reporter climb her way out of sports and survive when she becomes a target yet again?

What listeners say about Misquoted & Demoted

Avery’s life is a mess, and who does like her if anyone. From the new publisher and the staff at the newspaper, to her love life. Enjoyable and with good narration. Given audio for my voluntary review

the nature of the crimes in this book are more graphic than in previous books and parts are deeply disturbing. however, i believe these books hinge greatly on thinking things out before throwing oneself headlong into danger, or just mere stupidity. Elliott spends a good deal of time harping on Avery to do just that. anyone reading this series will hopefully come away with the knowledge that, even tho these plot line topics ring loudly toward today's actual headlines, a rational and mindful person can effectively avoid these types of situations by being proactive with personal safety and by having open eyes and an open mind. Amanda M Lee seems to genuinely be considerate of this in regards to her readers, and i applaud her tenacity.

That troublemaker Avery really got herself into another hairy pickle! The story was, yet again, very entertaining! Woe to the Rat and all of Avery's adversaries!

Angel Clark did another awesome job on this one!