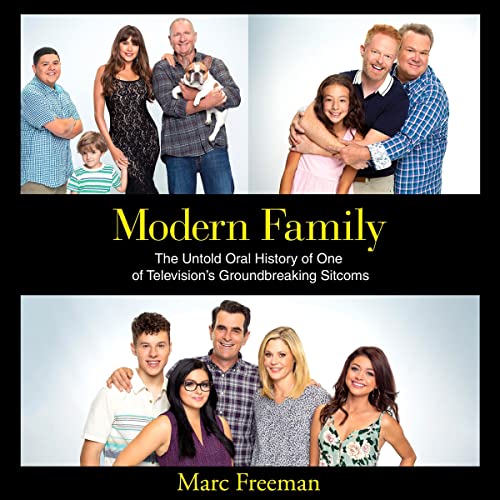 An oral history, with the full participation of cast and crew, of one of the most popular sitcoms in television history.

Since premiering in 2009, the groundbreaking television sitcom Modern Family has garnered tens of millions of devoted fans, earning 75 Emmy nominations and 22 Emmy Awards, including five in a row for Outstanding Comedy Series (one of only two sitcoms to ever achieve that feat). Professors have written about it. Psychologists have lectured on it. Leading publications, such as The New York Times and Washington Post, have explained their love for it. With funny, heartfelt, and relatable stories about family, Modern Family has gained a worldwide following of hundreds of millions of viewers in countries as diverse as England, Israel, the Netherlands, Germany, and South Africa.

As much as people love the show, few know the stories behind it. How did a kernel of an idea by Emmy-winning writers Steve Levitan and Chris Lloyd morph into a television juggernaut? Where did they find the cast? How did they come up with story ideas and film favorite episodes? What went on behind the scenes? Up until now, there have been individual stories and interviews about the show, but nothing comprehensive that captures the complete story of the series.

Marc Freeman's Modern Family: The Untold Oral History of One of Television's Groundbreaking Sitcoms is the only major audiobook ever compiled that explores this show as told by those who created it. More than 70 people, including the entire cast, crew, and creators, detail the full history of this iconic sitcom. The cast recalls their memories of the trials and tribulations of casting. They share their impressions from the first table read through the last light turning out. Writers, directors, and performers walk listeners through story lines, production, and favorite episodes. Guest stars such as Elizabeth Banks, Josh Gad, Adam Devine, Matthew Broderick, and Nathan Lane recall their appearances on the show while others recount their experiences working with Kevin Hart, Barbara Streisand, Ed Norton, and more. Listeners get to go behind the scenes and experience the show like never before, including personal photos. They'll also discover the never-told fallout and divorce of the two showrunners, making the show two separate series blended into one. Even people unfamiliar with the show will gain deep insight into what it takes to put a series on television.

Typically, oral histories come out as retrospectives, based entirely on recall. This one will have the benefit of having the ending occur in real time. From script development to final season (the 11th season will be the show's last) listeners will get a glimpse of the cast's relationships with each other and the emotions attached to saying good-bye to the best and longest-running workplace many of them expect to ever experience. Much like the series itself, this audiobook shares a story of family, of conflict and collaboration, that went into this timeless, groundbreaking series.

What listeners say about Modern Family

I adore this show and watched every episode. Now listening to this book has made the show 1000X better. It's like a behind the scenes look into all of them!

As far as content, this is a pretty good dive into the show. I really enjoyed the parts about coming up with the premise of the show and the casting. The production definitely needed to be improved. There were several places where there were audio issues such as silent gaps and overlapping sound. This would be easily noticeable by anyone listening through. Is there no QA for these recordings? It also was really annoying how for each time the speaker changed that they would read their name and title or character. This might make sense for when a person had not spoken in a while or some of the less familiar names, but it got really annoying to hear "Vergara, Gloria Delgado-Pritchet" each time Vergara commented. There is only one Vergara, I think we can remember who it is.

Painful to listen to. No pitch or cadence to his voice. Bueller….Bueller…. For such a colorful show this book reading is black and white

Of course, it couldn't cover every episode, but, it did cover plenty of gems. All great narration, even if two, Brittany and Ramon were the only two I recognized. 10/10 all around.

Need to fix the editing and production

Great story. Good narration. The issue is the production. It has overlapping dialogue, and repeating pieces of chapters. Very poorly edited.

Very insightful look into the life of some of funniest people to grace our on prime time. Much like the book written about the office this is a real treat. Funny onset antics and much love to be shared, and well as tears.

I wish the actors would have read their own words, but all in all....a great inside view of one of my favorite shows.

I really found it interesting! I love the show and relished the variety of information covered in this book. Sometimes it felt a little repetitive. I thought the narration was good. There were a handful of odd pauses and glitches, but it didn't take away from the listen.

It was really annoying at how many times the same people were introduced with both their names and actor names/ employment role. it was at its worst when dialog went back and forth with small snippets from each contributor. That's only reason I scored the story a little low.

I would have enjoyed this a lot more if the cast interviews were done by the cast and some of the narration audio wasn't great.