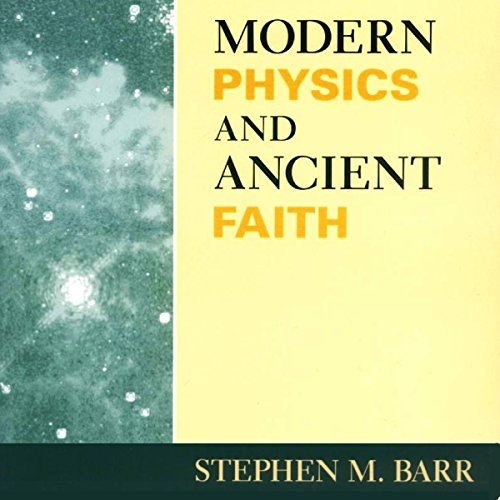 Modern Physics and Ancient Faith argues that the great discoveries of modern physics are more compatible with the central teachings of Christianity and Judaism about God, the cosmos, and the human soul than with the atheistic viewpoint of scientific materialism.

These discoveries led many thoughtful people to the conclusion that the universe has no cause or purpose, that the human race is an accidental byproduct of blind material forces, and that the ultimate reality is matter itself. Barr contends that the revolutionary discoveries of the 20th century run counter to this line of thought. He uses five of these discoveries - the Big Bang theory, unified field theories, anthropic coincidences, Gödel's Theorem in mathematics, and quantum theory - to cast serious doubt on the materialist's view of the world and to give greater credence to Judeo-Christian claims about God and the universe. Written in clear language, Barr's rigorous and fair text explains modern physics to general audiences without oversimplification. Using the insights of modern physics, he reveals that modern scientific discoveries and religious faith are deeply consonant.

The book is published by University of Notre Dame Press.

"Barr skillfully masters both physics and theology...His work is a thing of scholarly beauty." ( Science & Theology News)
"Barr...has a wonderful way of explaining difficult theories in modern physics. Equally impressive is his ability to reflect upon the philosophical and theological implications of these theories and explain them to us in ordinary English." ( Theology Today)
"An unusual and provocative affirmation of religious faith. Neither religiously sectarian nor technically daunting, this is a book that invites the widest range of readers to ponder the deepest kinds of questions." ( Booklist)

What listeners say about Modern Physics and Ancient Faith

I found this book to stir a desire to better understand physics and more specifically, quantum physics. The way Stephen Barr approaches ways of explaining quantum ideas without so much the math makes it easy to comprehend while keeping one who knows such maths attention. The reason for the desire for learning this language of physics is seeing the beauty it paints and desiring to soak in. This seems to me yet another way to soak in the beauty of the loving Father who created everything!

A great book, read by a bot.

AI has come along ways, but it’s still pretty obvious.
Definitely not the real Mark D Mickelson narrator. Just do a search and listen to some of his real work.

One of the few books where I honestly was dumbstruck by the ideas presented and the great way the author uses to explain his points. This, for those who will take the time to read it, is an eye opening examination of both the physical world we live in and how we think about it in relation to a scientific reality that convincingly points to something more.

This book presents a very well done argument for the plausibility of theism from the perspective of physics. The voice audio is extremely robotic but the content is interesting enough that it eventually drowns out the readers voice. I would recommend this book for any person interested in an apology of theism.

Where are outcomes "known" by observers (atoms subject to quantum uncertainty or something else)?
Is your brain just a complex atomic computer (are you? )
Does an infinite number of universes disprove God?
Just a few examples of the topics discussed.

Dr. Barr makes topics understandable for the non-scientist and includes some "notes for technical experts". Required reading for believers & atheists.