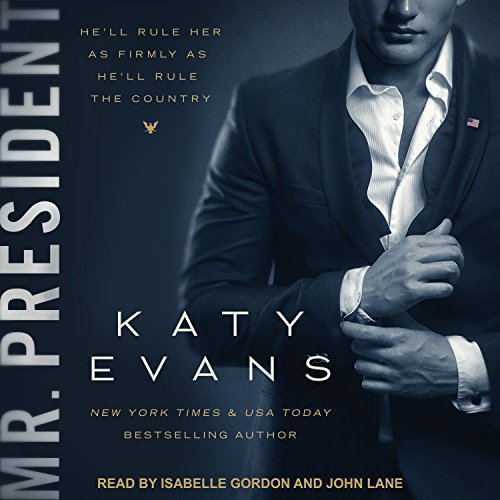 I met the president's son when we were both young. Matthew Hamilton was handsome, polished, and intelligent. I'd never met a guy like him. He promised me that he'd never run for president. I promised that if he did, I'd be by his side. Two terms later, an invitation to join Matthew Hamilton's campaign is the most exhilarating opportunity I've ever experienced. I'm determined to make a difference; he is determined to win.

Focused on his goal, Matt is steadfast, ruthless, and disarming. All eyes are on him, and his popularity is surging. But soon the next possible president of the United States is possessing me in more ways than one - and despite the risks, I'm helpless to resist. We're stealing touches, stealing moments, and stealing away at night. But our chemical connection is quickly becoming dangerously combustive, putting not only my heart but Matt's chance at the presidency on the line.

What listeners say about Mr. President

H/h is so boring. Over all this book could've been so much more. The plot had so much potential and it just didn't deliver.
I felt no connection with H/h. Not to mention the sex scenes lacked luster. I even skipped the scenes.
IMO wait for the sell. Do not use a credit.

If you've ever had someone to tell you a story and when they were done you wondered what was the point of that, then that sums up "Mr. President." The story started off interesting enough but then went into the back story that lead to that point. The back story should have been summed up in one chapter and then gone on with the rest of the story that could have been completed in one book. The book ended on a cliffhanger that wasn't really. If this is a trilogy that drags on what could have been told in one book, then this will probably be the only book in this series I will listen to. This story has a great premise but this first book didn't have much substance.

The narrators were interesting and kept me listening until the disappointing end.

If I hadn't listened until the end, I would have returned it. The story was okay but not good enough that I want to listen to multiple weak books to find out what happens.

Audible Escape
This is story is in First Person Narrative so if you like that type of story, this is for you. I am a huge fan of narrator Ms Gordon a.k.a. Gabra Zackman. Her male voices are wonderful, and Ms Gordon makes our hero sound so dreamy. I am new to this author, but if Ms Gordon was not narrating, I would pass. The premise is eg President Clinton-ish and Monica Lewinsky adventure polished up.
I do use the 1.25x speed to match the tale.

ok but a little disapointed

It was an "ok" audiobook. The dialog was a little boring, especially for the candidate's character. I expected more dramatic drama, but there wasn't any. And, as too often, the end of the book doesn't really complete the story, so stay tuned for the next in the series. The female narrator was pretty good, the male narrator was just ok.

I can't believe I put this book off for as long as I did. I love this authors writing but I despise politics (I'm still traumatized from the US 2016 election) and the thought of reading a book with a man running for president really didn't interest me. I'm glad I finally got around to reading this one because it was fantastic and even though there were some politics, it wasn't what I was expecting! I loved Matt. I loved that he had a soft and sweet side, that he really wanted the best for his country and to serve the people. The chemistry between these characters was intense, the steamy scenes super hot and the drama not over the top. Narration was really well done. I really loved this one and can't wait to start the next book!

The storyline was excellent, the male actor's voice wasn't delightful like other Katy Evans novels. Matt and Charlotte developed a relationship that was well written in pace. I love it!

The characters are so well developed that you can't help but root for them. The steamy sex on,y shows how much Matt and Charlottes cares for one another. A must read.

I enjoyed this one, but probably not as much as I anticipated. The narrators were good, I just don't think they matched the way I heard the characters in my mind.

This story is charming, revolving around a letter the heroine wrote to the hero when she was just eleven years old after a brief encounter. Fast forward a decade and Charlotte is drawn back into Matthew's world... during his presidential campaign. That's when the chemistry explodes, and these two can't stay away. It's both sexy and sweet with just enough political intrigue to keep it real. Though the focus is on the relationship - the heated attraction, their shared political views, and the emerging love. The gradual evolution of the relationship hooked me. And then... cliffhanger! So I immediately began book two.

I just hate cliffhangers.... Now I have to buy commander and chief to get the conclusion 😒