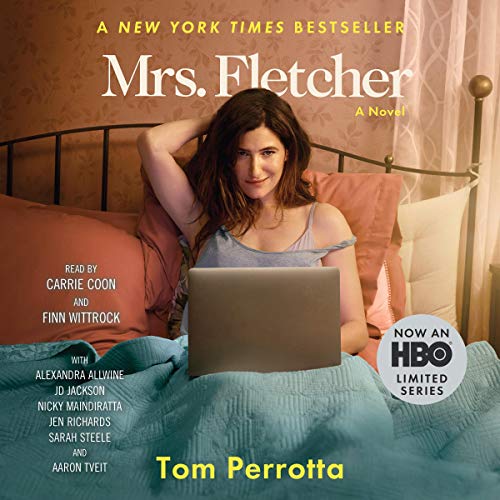 From one of the most popular and best-selling authors of our time, a penetrating and hilarious new novel about sex, love, and identity on the front lines of America's culture wars.

Meanwhile, miles away at the state college, Eve's son, Brendan - a jock and aspiring frat boy - discovers that his new campus isn't nearly as welcoming to his hard-partying lifestyle as he had imagined. Only a few weeks into his freshman year, Brendan is floundering in a college environment that challenges his white-dude privilege and shames him for his outmoded, chauvinistic ideas of sex. As the New England autumn turns cold, both mother and son find themselves enmeshed in morally fraught situations that come to a head on one fateful November night.

Sharp, witty, and provocative, Mrs. Fletcher is a timeless examination of sexuality, identity, parenthood, and the big clarifying mistakes people can make when they're no longer sure of who they are or where they belong.

What listeners say about Mrs. Fletcher

I loved that this was an ensemble performance. At times it felt like a play rather than a novel. A good book overall. It explores contemporary sexual politics in a relatable way. I also enjoyed the twist at the end!

My first Audible book. Very impressed with the book and the presentation. Eager to listen to more titles.

Beautiful book. So human, so believable. Wonderfully produced, with great performances from the two leads. And Perrotta's writing -- his diction, his humor, his pacing -- shine through yet again. I loved "The Leftovers," and "Mrs. Fletcher" isn't to be missed as well.

This novel is a bit cringe worthy since I’m a middle aged woman, but touches on many timely topics. Beautifully written, great narrators. Loved it.

Something about this calls to mind a modern Mrs. Dalloway, with other characters' perspectives thrown in. I liked it and listened compulsively, though I can't quite say why it grabbed me. Excellent voice performances. I'd give the story a 3.7. I haven't had time to digest fully, but I'm not sure if I'd recommend it, or to whom. This'll keep me thinking for a bit.

This author has often skirted greatness, not always making it but coming very close. This was a heartwarming during a story that spoke to me on many levels although it's in the times the author was trying to be a little tongue-in-cheek I don't think he's really ready for that yet. Give the book time let her talk to you and at the end it's worth the reward you will receiveo

As usual, this author presents everyday life as both hilarious and tragic. The performances were excellent as well. Loved it.

Obviously written by a man

Wasn't expecting much from this but it turns out it's one of my favorite books of the year!

I really enjoyed this story! I found the characters refreshing. I enjoyed the two storylines of a mother searching for new interests in her 40's while her son entered college. I thought the author had a fresh way of thinking about how people use technology, pornography, and classes to enhance their lives. I enjoyed so many of the characters in the story. The ending was a little bit of a let-down, but the author did a great job of tying everything together. I heard about this on NPR and thought their interview with the author was delightful.
My only negative comment was that in the recording, using a very gay man characterization for the transgender voice was misinformed. Maybe someone should have actually talked to some transgender women before casting it that way.

Tom Perrotta is a good story teller. One is unsure of his objectivity but "Mrs. Fletcher" is a young man's fantasy, with a personal view of ageism.

Perrota emasculates young men who demean women and sexually energizes women in their youth and mid-40s. All is well that ends well (which "Mrs. Fletcher" does) but the fecklessness of youth seems hyperbolic and women's desire seems overdrawn.