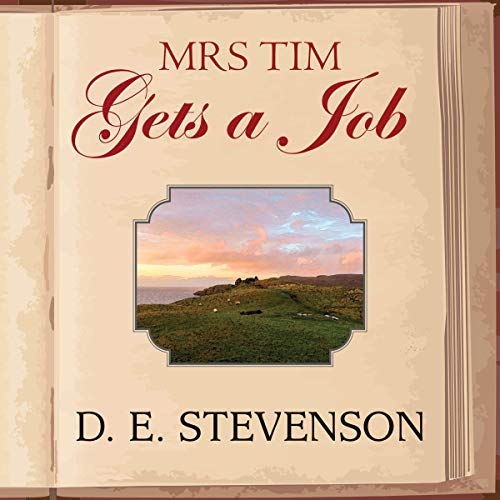 Mrs Tim Gets a Job

With husband Tim stationed in Egypt and her children at boarding school, Hester Christie -affectionately known as 'Mrs Tim' and based loosely on D. E. Stevenson herself - finds herself at a loose end, until her friend Grace takes her at her word and finds her a job with the formidable Erica Clutterbuck, who has opened a new hotel in the Scottish Borders.

Once there, Hester’s initial ambivalence disappears in a swirl of problems and situations with hotel guests and old friends alike, including serving as fortune-teller at the local fête and aiding and abetting romantic schemes, not to mention the reappearance of the debonair Tony Morley.

What listeners say about Mrs Tim Gets a Job

DE Stevenson Gives Lovely Walk Through Another Time And Culture

Like all of her books, the Mrs. Tim series is first and foremost lovely entertainment. More than that, though, some things are romanticized, the descriptions and characters are true and real so that you feel as if you were there. Because of the incredible quality of the writing one can bear the rare jarring note caused by the use of a phrase or word that reveals an attitude which is thankfully generally recognized now as wrong. I don’t think we should discard wonderful older stories and literature that reveal the wrong attitudes of the past, but instead, we should take them as accurate history of what we were lest we try to whitewash these ills. The people are the more real for these occasional ‘reveals’ and good reminders of how people can be raised to have bad thinking.
I’ve probably said too much about what is such a small element—a word or phrase per book, but they are egregious and I wouldn’t want a reader to give up on a book, or the author, when the thing occurred without taking a pause, thinking about when the books were written, thanking God for change and going on to enjoy a tremendously good read. I love Scotland and I could listen to the readers for the sheer pleasure of the lilting accents. Indeed, all her books on Audible are old friends and I listen to them over and over as I am at home with cancer. They light my longest hours with beauty, laughter, romance and a glimpse into days gone by.

Love the book. Was dismayed at the stilted reading, and the awful and unlikely accents. Had to put the book aside for days before reluctantly resuming the story. Having waited long for it to be available as an audiobook, I was very disappointed with the performance. However, my love for the Mrs. Tim series finally overcame my disappointment, and I continued listening in spite of it.