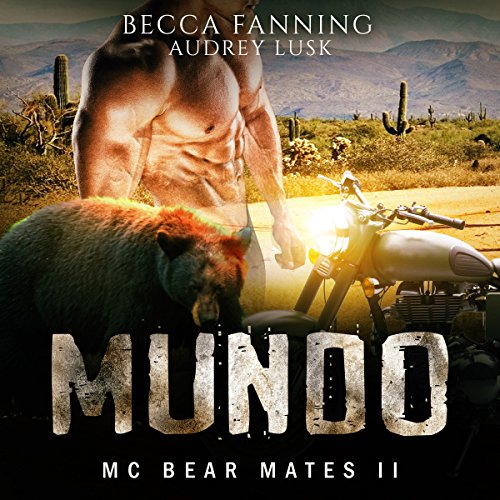 Mundo thought he knew what he wanted, then he met the mate he never knew he needed.

Jimmy "Mundo" Aston always found himself deep in the sh*t. Whether it was going at it with rival bikers or cops, he never let his opponent get the better of him. This attitude was why he found himself in jail, eager to get out and back with his Club. Three hots and a cot weren't bad, and at over six feet tall he knew no one would try any funny business. So really it was just getting through the boredom, until he met her.

Christie Lockheart didn't believe in love. She didn't believe in chances. She'd lost loves to chance and thought they could go to hell for all she cared. She could at least focus on her work, the one thing that kept her grounded. As a dentist for the County Corrections department she went from jail to jail to treat inmates. Not a glamorous job, but she thought she was beyond glamor at this point. Until she met Mundo Aston, and their brief interaction left her with lots of questions...and the desire to take a chance again.

Just as they try to put together a normal life, the evil stalking the Nomads MC strikes again!

This full length bear shifter paranormal romance novel has all the action, steam, and true love that only a Fated Mates story can deliver!

What listeners say about Mundo

I was surprised at how much I enjoyed this - the story was interesting, it was fast paced, and the sexy times were well placed. There was even some mystery and intrigue. It was surprisingly sweet and though I feel like some details were left underdeveloped, I was satisfied with the story as a whole. Initially, I thought I’d have issues with the quality of the narrator’s voice but she did an excellent job of depicting each individual character. 3 out of 5 wine glasses.

What did you love best about Mundo?

What I loved best was that it was a shifter romance about two individuals from two different backgrounds falling for each other.

Sometimes wanting to fight a romance that you have no control. But giving in to it he roller coaster ride.

Loved this book! Fantastic story and characters and the heat level is off the charts! Amazing narrator, she has a unique voice for each character and has carried over the same tones from the previous book in the series. While this is part of a series, it can easily be listened to out of sequence. Can’t wait to listen to the next one! I received a free review copy of this audiobook at my request and I have voluntarily left this review.

Read the book, save the credit

I enjoy Becca Fanning books and MC shifter stories. In terms of the story and the writing I did enjoy this book. The narration ruined it for me. I could not get into the narrators rendition of this. I was unable to finish listening to this book as I thought it was that bad. Got a kindle version of the book to finish reading it.

I provided this review in exchange for a complimentary copy of the audiobook from the author, narrator, or publisher.

You changed the rules

The rules around mating in book one are broken in this book, I found that a bit annoying, but if you ignore that then it's an enjoyable book.

The chemistry between Mundo and Christine is strong and hot, their 'bedroom escapades' were creative and entertaining. I just wish it had been longer, I was very disappointed when it ended.

The world this story is based in is interesting, having shifters both known about and hidden is different to what is normally done, and the mating concept is also done in a slightly different way.

The narration is well done, great character voices and the delivery is a good match for the story.

I received a free copy of this book from the author and/or narrator and/or publisher and I voluntarily wrote this honest review.

If you found this review helpful would you please take a moment to click yes below.

Mundo by Becca Fanning was another great read in The MC Bear Mates series. Jimmy "Mundo" Aston never thought that he would find his mate when he was locked up. Christie is a dentist in the jail and never expects Mundo to show up at her door when he is released. I loved reading this book and cant wait to read more by Becca Fanning.

I was given this free review copy audiobook at my request and have voluntarily left this review."

Hunky Mundo finds his mate in the last place he expected. She's his dentist, in prison.

Audrey Lusk is perfect for narrating this audible. Her voice is husky and sexy making the already hot sex scene's so much hotter.

I requested a copy of this audible and am happy to give my honest review.

I enjoyed listening to this book and enjoyed the storyline. As always this narrator did a wonderful job. I always enjoy listening to her.
I was given this book for a honest review. I was happy with the story and I would recommend it.

Bears and MCs, but no aliens

I enjoyed hearing ‘Mundo’ aka James Astin’s story of finding his mate - the dentist from jail? A worthy installment after Mars. An enjoyable sexy time out from the real world ;-)
The natural vamp sexiness of Ms Lusk’s voice always ads more to her readings.
I was given this free review copy audiobook at my request and have voluntarily left this review.