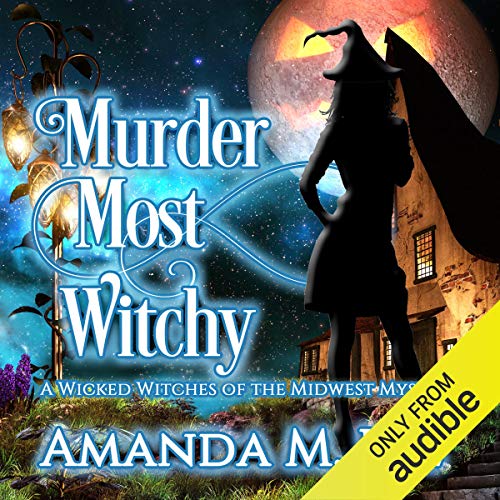 Life in the Winchester household is hardly settled. That’s true for Bay Winchester more than anybody else.

Her boyfriend, Landon Michaels, is away from town on an undercover assignment for the FBI, and Bay is struggling not to let worry and unease rule over her life. Halloween is approaching, after all, and Hemlock Cove is bustling with activity. Bay has her hands full even when her heart feels empty.

A chance encounter with Landon while he’s undercover leaves Bay exposed...and furious. By the time Landon returns to make things right, things spiral further out of control when Bay is attacked in her own home and wakes to find a dead body on the lawn.

The dead woman has ties to Landon’s case, and when the investigation is given to the Michigan State Police instead of Landon and Chief Terry, Bay knows she’s in trouble. Between her issues with Landon and his refusal to step away from the case, things are about to come to a head.

Landon is determined to protect Bay at all costs, even if it means going to war with the people he once considered colleagues. For her part, Bay has to dig deep for courage - deeper than she ever dreamed, in fact. Faith is key, because Landon needs it and so does she.

The final fight is one no one saw coming, and it brings Landon and the Winchesters full circle as they once again find themselves walking into a corn maze looking for trouble...and desperate to protect one of their own.

When the end comes, someone Bay loves with her whole heart is in danger, and survival isn’t a given. It’s going to take everyone to save the day. Aunt Tillie has a plan, though, so there’s absolutely nothing to worry about.

What listeners say about Murder Most Witchy

I love the entire series but this book is absolutely frustrating.

The first 2-3 hours of this book Bae is nothing but a whiney insecure little child. (yes a child and the narrator does not help her case)

You would think after seeing her and Landons relationship through Aunt Tilly's eyes she would be more confident, but nope she acts like immature child and falls back to her old self. She has no understanding of the importance of "Undercover work". She acts like an immature teenager pouting about the stupidest and most insignificant things, making a big deal out of something so small.

She then continues to drive everyone else insane and she then tries to pick a fight with other people.

This insane insecurity is 5 step backwards to her characters growth and its upsetting that she moved backwards in development rather then forwards.

It was hard getting through this book! Very disappointing.

So painful I can’t continue...

I’m a couple hours in and the ONLY thing happening is Bae whining like a spoiled child about Landon doing his JOB. I can’t see any other mystery story line typical of the series on the horizon and having just spent an hour in yoga class regaining my chill I’m cutting my losses as being annoyed with this book isn’t worth the time it takes to listen. It’s disappointing as I enjoyed getting too know these characters, but it seems the author is struggling to come up with new story lines to keep the series going.

If you could sum up Murder Most Witchy in three words, what would they be?

Need to go back to previous narrator! Hollis McCarthy is a terrible narrator better of reading books than having to listen to McCarthy.

Who would you have cast as narrator instead of Hollis McCarthy?

Anyone would be better even a third grader!

Did not matter one way or another.

not the best of the series

the whole first part of the book is it a boring I have ever read or this case listen to. I don't know how Bay turned into such a whiny self-absorbed creature. this is a woman who has worked as a reporter in a big city and run a Small Town Newspaper. the only thing that got me through that whole beginning part plus the fact that I read a book to the end even if it's bad. the back half of the book finally turned into what I expect from the series.On the whole I was disappointed in this particular book.

He goes from a control freak to insecure and they just make her seem like she never listens and almost stupid.

I love this serious, but don't like that it's had several different narrators, but the one on this book I love the most because she changes the voice tunes to match very well the characters

This one actually had a couple of suprises

For the first time I was not able to predict the entire story. nice surprise!

Not an original storyline

What would have made Murder Most Witchy better?

I am not a fan of weak, whiney and spineless women or men. Bay should be way beyond her insecurites.

Has Murder Most Witchy turned you off from other books in this genre?

Her voice highlighted Bay's whining and was irritating.

Aunt Tilly is always a joy.

It would be nice for Bay to actually be an adult and become a strong woman. There are enough books that portray women in a bad light.

I really enjoy Amanda M. Lee’s Witches of the Midwest series. This was definitely not my favorite installment. Bay was overly-whiney in the first part of the book, not understanding Landon’s assignment. The story improved but was not at the higher standard of previous installments. If you’re a fan of this series I recommend this book.

someone reviewed that they hated this book bc Bay regresses and her character moves about 5 steps back from the progress she's made as a person. that her insecurity and whining makes it hard to listen to this book. iii say...😂😂😂
...her whining IS insipid and annoying, and it makes her look like a total dork, which only makes meee laugh like a loon! i find it completely hysterically funny that, after everything they've been thru, and after allllll the times poor Landon has been made to suffer Thru those insecurities and jumped to conclusions, she Still manages to fear him leaving! she Needs to shut up and deal, esp when it comes to the bacon curse, cause she's Always sooo freakin flaky!! that's Bay!!
... she'll come into her own and all of This will be behind her. and Us!
💗💗💗