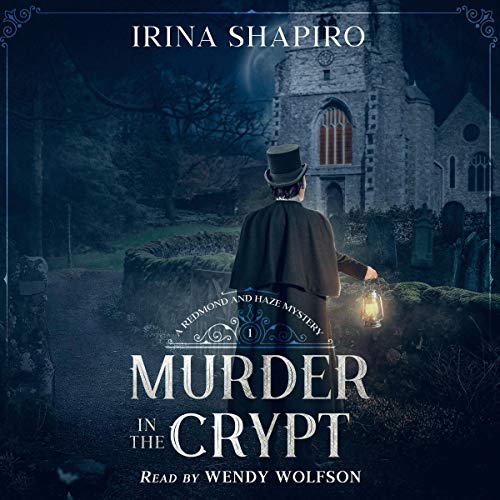 Murder in the Crypt

Written by: Irina Shapiro
Narrated by: Wendy Wolfson
Try for $0.00

When the body of a young man is found stuffed into the tomb of a medieval knight, Parish Constable Daniel Haze is tasked with investigating his first solo murder case. Suspicion instantly falls on the only stranger to arrive in the village of Birch Hill just before the crime took place, but the American captain proves to be an unexpected asset. A former soldier and a skilled surgeon, Jason Redmond is not only willing to assist Haze with the investigation but will risk his own safety to apprehend the killer.

With no suspects, no motive, and few leads to follow, Redmond and Haze must solve the crime before one of them becomes the murderer’s next victim.

Murder in the Crypt is the exciting first installment of this Victorian murder mystery series set in a quaint British village.

What listeners say about Murder in the Crypt

The basic Idea was great, but all the sex was just poor writing. This author needs Therapy.

The south were not Nazis

These type of mindless books are usually good before bed or waking up. It did help me sleep. The plot is weak. It is a throw away novel. But was the historical inaccuracies finally drove me crazy. The statements about the American civil war, all through the book, are grossly distorted. The author could actually study the civil if they are writing about it.

I like the story, but the narration left a little to be desired. I hate to be that nitpicker, but Redmond is from New York, and fought for the north. Why does he have a southern accent? As an American, it makes me a little crazy.

I thought the story was interesting, and that is a good thing because the narration was so poor I would have given up on it. When the main characters are male the narrator should male.

Great characters pairing an American post Civil War Captain/Surgeon and an English constable of a small village. The Captain finds himself the Lord of the manor following his grandfather’s passing and helps determine who stashed the body in the crypt! Delightful plot with surprising twists. Very enjoyable reading with good character development.

The story was OK but not overwhelming. I Felt that the narrator did well with the female Voices but not with the male voices. They all sounded like husky bedroom voices.

I really enjoyed this mystery. Usually I’m able to figure out who did it and why but this one kept me guessing. One of the best mysteries I’ve listened too in a very long time.

This was a light weight yet enjoyable mystery. If you are looking for a slower paced, clean mystery I recommend this book.

Amazing new serious from one of my FAVORITE authors!

I love all of Irina Shapiros work! This new series does not disappoint! I can’t wait to read additional installments! As always the character development is impeccable and the plot is engaging. Of course my favorite narrator is also reading for this series! I love Wendy Woodson!

Murder in the Crypt

A fantastic mystery that had me on the edge of my seat the whole time. This Author really knows how to bring a story to fruition. I love how the Author and the Narrator has brought the story. The different voices are fantastic I definitely recommend this.
Shauna Joesten