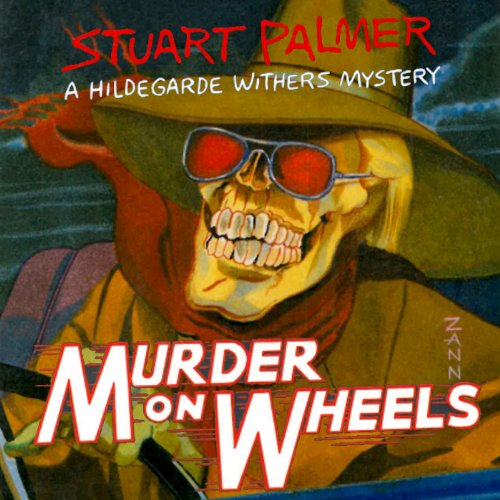 Written by: Stuart Palmer
Narrated by: Julie McKay
Try for $0.00

Thick flakes of snow are falling on Fifth Avenue at twilight - and then the body of a young man suddenly falls among them, mysteriously out of the sky.

Momentarily the wheels of traffic are halted, but other wheels spin relentlessly on - the wheels of death, the wheels on which bloody murder moves silently through Manhattan’s streets.

Once again Miss Hildegarde Withers, the schoolteacher-detective, matches her wits against an unknown X, armed only with the precious gift of common sense and a cotton umbrella. One youth is dead, and his twin brother moves under a cloud. Then death rolls past again, like a swifter Juggernaut, while Miss Withers faces the problem of the Driverless Roadster, the Man Who Wore Two Neckties, and the Symptoms of Bathtub Hands.

Murder on Wheels is a fast moving mystery, packed with thrills for the fan who likes to play detective.

What listeners say about Murder on Wheels

This is the second book in the series and begins with a nearly impossible murder. There are twists and turns aplenty here. Very little is as it seems. While dated, I found this to be a compelling and enjoyable mystery. I guessed some bits but nowhere near all of the conundrums.

Enjoyable and recommended, as long as you are fine with the time period of the early 1930's.

This narrator cannot do a man's voice and they all sound like women that's really the only bad part other than that the stories are really good! I'm really enjoying them already started the third one. Really wish they used a better narrator. Besides no men's voices being used....she pronounces words funny never knew that bureau was two words bur-row is how she says it.. So far first 2 books she did a "man" with the cold and lisp. It doesn't help to make it sound like a man...it's just really annoying!!