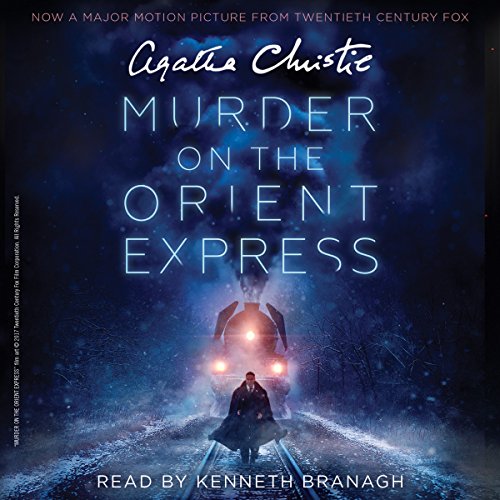 Written by: Agatha Christie
Narrated by: Kenneth Branagh
Try for $0.00

A new recording of the most widely read mystery of all time, performed by Kenneth Branagh.

Just after midnight, the famous Orient Express is stopped in its tracks by a snowdrift. By morning, the millionaire Samuel Edward Ratchett lies dead in his compartment, stabbed a dozen times, his door locked from the inside. One of his fellow passengers must be the murderer.

"What more...can a mystery addict desire?" ( The New York Times)

Very much enjoyed the performance. Not as dark as the David Suchet version but very good.

Wonderful story, captivated from beginning to end! The reader was FANTASTIC I will intentionally look up other books he reads.

Interesting variation of this classic who-done-it

I have enjoyed reading Agatha Christie's novels since childhood and while this does differ in some ways from the original story, it has been done so well. Kenneth Branagh's voice is rather nice to listen to as well.

The story was amazing and Kenneth Branagh does as brilliant a job of narrating as he does in acting. Spot on!

Kenneth Branagh is a great Poirot

Kenneth Branagh does a great job in all the performances. Very enjoyable and I “couldn’t put it down” or I suppose “turn it off” :)

This is such a great story and Kenneth does an amazing job!!! I was captivated the whole time I was listening. highly recommended this book!!!

Don’t be misled by the “Movie Tie-In” in the title. This is not a novelization of Branagh’s movie of Murder on the Orient Express. It is the original novel read by the best possible reader, Kenneth Branagh. As those who have listened to his version of Heart of Darkness know, Branagh can handle both narration and a wide variety of characters with absolute clarity and profound expression. This is a light work, but it is great fun, and Branagh performs it flawlessly.

A Perfect Read Apart from the Americans

I'm a great admirer of Kenneth Branagh as an actor and was thrilled to get his reading of my most re-read Agatha Christie. His reading is of course first rate so far as Poirot and the Europeans, but the American accents on Mrs. Hubbard and Hector MacQueen are a distracting absurdity that really breaks your focus every time it occurs. You're no longer listening to the text but at that weird verbal mash many Brits do as an American accent. This is surprising in that Branagh did a superb California accent 25 years ago in Dead Again. I can't imagine what happened, but it's not good.
Speaking of Mr. MacQueen, Christie repeats many times what a likable and affable young man he is. Perhaps Branagh was thinking of his movie casting, because none of that comes through.

I know it sounds sacrilegious to say, but I expected a terrific actor like Kenneth Branagh to provide better narration. It was good, but his American accent isn't great, nor is his ability to switch and provide clear differences in characters. I've listened to a lot of Christie stories narrated by Hugh Fraser, and I would rather have had him narrate this classic Christie novel.

It's obvious that Kenneth Branagh has been concentrating on this book lately. He has a lot of fun narrating these characters, and we listeners all benefit from his experience directing and starring in the most recent film version of probably the most iconic and familiar classic of Agatha Christie.

Unlike in his film, Branagh doesn't at all mess with the traditional interpretation of Hercule Poirot or the other characters here. He narrates with gusto, but he sticks to the original text. I loved his accents and the vibrancy of his people - he especially has a great time taking on the train's American passengers.

Whether or not you have seen (or want to see) his movie, Branagh's interpretation of Murder on the Orient Express is a good reminder of why the book has always been so popular. There are other Audible versions; I also recommend an excellent one narrated by Dan Stevens. But Branagh is a master!

Perhaps all directors (especially those who act as well) should narrate the books they've adapted for the screen.

Stunning! My ears were at the edge of my seat!

Most readers of a certain age (or lovers of murder mysteries) know &quot;who done it&quot; on the Orient Express. The ending isn't the point of this book. Ms. Christie's prose is fabulous! Like Jane Austen, she's a master of dialogue. What there is of narration doesn't get in the way of the &quot;voices&quot; of the story.

Add to that genius the vocal talents of Kenneth Branagh, and you have a feast for your ears. Does his Poirot speak in a true Belgian accent? I couldn't tell you. But, Poirot speaks in the PERFECT over the top French accent to fit the character. The same can be said for the other characters - the Italian's voice is a caricature of an Italian immigrant's voice, the Russian contessa's voice makes it clear that she's shimmering in her jet beads and jewels, the American missionary (or not) and the salesman are SO &quot;American.&quot; The characters are SO strongly performed that the listener's mind can see them, each unique.

Overacted? Oh, most certainly, but PERFECT for this edition of the classic story.

I absolutely loved Kenneth Branagh's rendition of this book. He brings the multinational cast of character to life. I hope Branagh will tackle more classics.....outstanding performance!!!

I was rather excited for this audiobook. The movie was amazing. But Branagh's reading was terrible. He dropped Bouc's Belgian accent halfway through the book. His own voice narration sounded almost bored at times.

I'm going back to Hugh Fraser.

A must for Christie and Branagh fans

Loved listening to this audiobook! Agatha Christie is a fantastic story teller! The narrator, Kenneth Branagh is one of my favorite actors. He does a marvelous job of bringing all the characters to life. But, sometimes I have some trouble understanding him.

Kenneth Branagh is absolute perfection! The story is simply divine! My teenagers and I were absolutely enthralled and look forward to more Agatha Christie!

Not going to go into the story much. It's a classic, it's well done, if you like mysteries you should check it out. Kenneth Branagh's performance is extraordinary, he's excellent at voices, and I particularly like his Poirot.