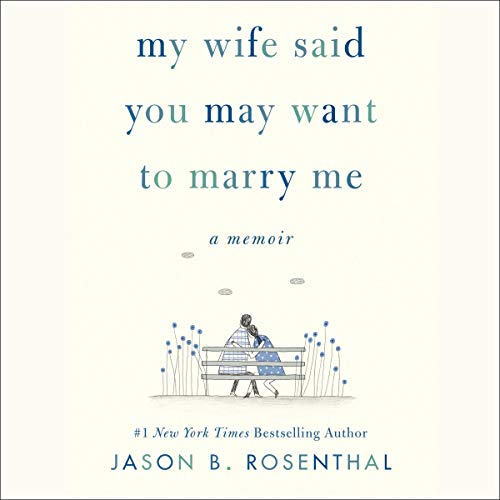 My Wife Said You May Want to Marry Me

An inspiring memoir of life, love, loss, and new beginnings by the widower of best-selling author and filmmaker Amy Krouse Rosenthal, whose last act of love before her death was setting the stage for her husband’s life without her in a Modern Love column in the New York Times.

On March 3, 2017, Amy Krouse Rosenthal penned a Modern Love column for the New York Times - "You May Want to Marry My Husband". It appeared 10 days before her death from ovarian cancer. A heartbreaking, wry, brutally honest, and creative play on a personal ad - in which a dying wife encouraged her husband to go on and find happiness after her demise - the column quickly went viral, reaching more than five million people worldwide.

In My Wife Said You May Want to Marry Me, Jason describes what came next, even as he struggled with her loss. Surveying his life before, with, and after Amy, Jason ruminates on love, the pain of watching a loved one suffer, and what it means to heal - how he and their three children, despite their profound sorrow, went on. Jason’s emotional journey offers insights on dying and death and the excruciating pain of losing a soulmate and illuminates the lessons he learned.

As he reflects on Amy’s gift to him - a fresh start to fill his empty space with a new story - Jason describes how he continues to honor Amy’s life and her last wish and how he seeks to appreciate every day and live in the moment while trying to help others coping with loss. My Wife Said You May Want to Marry Me is the poignant, unreserved, and inspiring story of a great love, the aftermath of a marriage ended too soon, and how a surviving partner eventually found a new perspective on life’s joys in the wake of tremendous loss.

Didn't want to stop listening. Such a beautiful tribute to his wife and everyone around them. A wonderful (read) listen.

Not What I Was Hoping For

It is difficult to write anything but a rave review for a man who is writing about something so personal; however, readers need to understand what they're getting into. After reading the synopsis and other reviews, I was led to believe that this book was an examination of death, terminal illness, and the shift/void left in family dynamics. What it turned out to be was a sort of self indulgent telling of how idyllic their marriage was. It also screamed unexamined privilege and gross generalizations when not speaking directly about his family.

Overall, if you are actively grieving this might be a book that could help. If you are looking for something deeper, I suggest you keep looking.

Although I appreciate that this was a very personal memoir, I found Jason’s delivery to be annoying. He has a very clipped way of speaking and reading, that often did not flow with the meaning of the sentence.

Decent story but too boastful

I have a similar circumstance as the author and listened to the book for insight. There is some, but the book has a perspective coming from upper middle class privilege. There is a lot of bragging and boasting about his life before his wife gets sick. He actually refers to one of his children as “brilliant.” I was hoping for much more from this.
Also the author narrates. He has a nice voice but his reading is a little dull. I think a pro narrator would have added some energy and objectivity.

I appreciate his message about grief and moving forward after terrible loss, but his narrative felt lacking due to its description of their everything and everyone in their world as being so completely perfect. The author did not have a single negative or critical comment to say about anyone in his entire extended family or circle of friends. Everyone was the best, brilliant, a hero, completely supportive, etc. I’m sorry, but I did not enjoy this book. Also, the previous review’s comment about the way the author reads with random stops. is. spot. on.

Loved this story, but I had to muscle through it because the narrator pauses. Almost. Every. Word.

A beautifully transparent work on love and loss

It brings me great comfort to know that I am not alone in my experience of grief and that there is hope for the future. Thank you Jason for sharing your story.