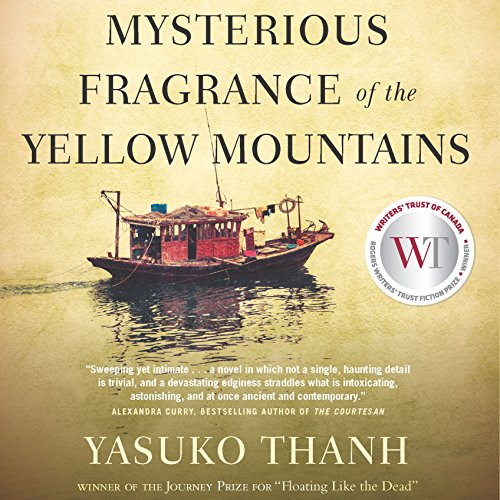 Mysterious Fragrance of the Yellow Mountains

Written by: Yasuko Thanh
Narrated by: Tony Phan
Try for $0.00

How can you stand up to tyranny when your own identity is in turmoil?

Vietnam is a haunted country, and Dr. Nguyen Georges-Minh is a haunted man. In 1908, the French rule Saigon, but uneasily; dissent whispers through the corridors of the city. Each day, more Vietnamese rebels are paraded through the streets towards the gleaming blade of the guillotine, now a permanent fixture in the main square and a gruesome warning to those who would attempt to challenge colonial rule.

It is a warning that Georges-Minh will not heed. A Vietnamese national and Paris-educated physician, he is obsessed by guilt over his material wealth and nurses a secret loathing for the French connections that have made him rich, even as they have torn his beloved country apart.

With a close-knit group of his friends calling themselves the Mysterious Fragrance of the Yellow Mountains, Georges-Minh plots revenge on the French for the savagery they have shown to the Vietnamese. And it falls to Georges-Minh to create a poison to mix into the Christmas dinner of a garrison of French soldiers. It is an act that will send an unmistakable message to the French: Get out of Vietnam.

But the assassination attempt goes horribly wrong. Forced to flee into the deep jungles of the outer provinces, Georges-Minh must care for his infant son, manage the growing madness of his wife, and elude capture by the hill tribes and the small - but lethal - pockets of French sympathizers.

Journey Prize winner Yasuko Thanh transports us into a vivid, historical Vietnam, one that is filled with chaotic streets, teeming marketplaces, squalid opium dens, and angry ghosts that exist side by side with the living.

What listeners say about Mysterious Fragrance of the Yellow Mountains