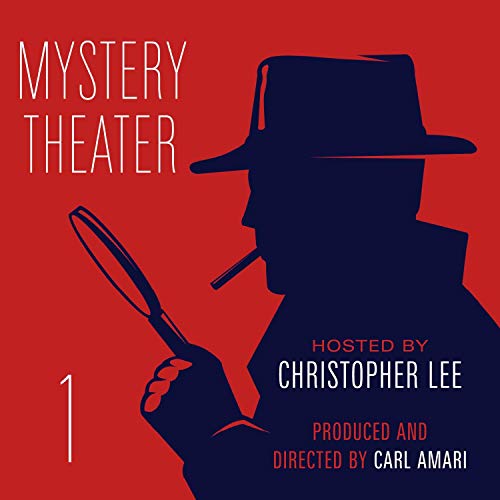 Written by: Carl Amari
Narrated by: Full Cast
Try for $0.00

A collection of suspenseful radio dramas hosted by Christopher Lee that will take listeners through thrilling perplexities set in the era of the '40s and '50s.

An invalid woman battles the frustrations of the telephone system after she overhears a plot to murder someone.

“The Jonathan Diamond” with Chester Morris

Blackie is arrested in Chicago. He's accused of taking $10,000 from a woman's grandfather. Then he learns it's all part of the woman's plan to help her recover "The Jonathan Diamond".

A drama about a young runaway who commits murder, then catches a bad case of conscience.

A man kills his wife and stuffs her body in the elevator, from which she promptly disappears.

Ralph Chase hires Diamond about a problem with his stepdaughter, but gangster Murray Lang takes a shot at him first.

A newly graduated lawyer awakes with a dead body in his bed and has a very difficult time getting rid of it.

A man calls the police to say he's going to be murdered. Ten seconds later, the man's daughter calls to say she just found his body.

“The Innocent Club” with Dana Andrews

“The Party” becomes interested in a government clerk framed for stealing secrets, and they form a committee to see that he gets justice.

Mystery writer Barton Drake finds himself snowbound during a freak blizzard with a group of friendly strangers. They wake up in the morning to discover a suicide. But was it suicide?

“The Marvelous Barastro” with Peter Lorre

The classic about the circus magician and his blind wife...and her ultimate horror.

“The First Letter” with Alan Ladd

Dan Holiday's first client is Carla Williams - who has him framed for murder!

“Seven Steps to Murder” with Bill Forman and Howard Duff

What are the seven steps that could progress a cordial acquaintanceship toward murder? A drama critic and a playwright find out....

What listeners say about Mystery Theater 1