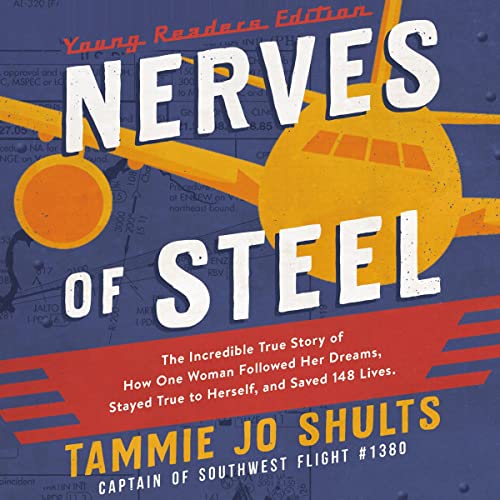 The amazing true story of pilot Tammie Jo Shults for young listeners! This autobiography of a woman aviator overcoming gender bias to achieve her dreams will inspire young people to work hard toward their goals, never give up, and stand firm in who God created them to be. A must-hear memoir for girls and boys who are excited for the adventure ahead.

Tammie Jo Shults grew up wanting to be a pilot. She worked hard but faced many obstacles and challenges along the way that threatened her dreams. Doing the next right thing kept her spirit alive as she persevered to find her special calling - to serve God and the world around her. Tammie Jo’s path eventually led her to join the navy, where she became one of the first women to fly the F/A-18 Hornet. Her specialized flight training in fighter aircraft honed her skills to a razor’s edge. After her term in the military, she went to work for Southwest Airlines flying Boeing 737s. Years later, those lessons served her well as she was put in the right place at the right time to safely land a crippled plane and save 148 lives.

This memoir of hope and perseverance tells Tammie Jo’s story from her days of growing up on a New Mexico ranch to the disaster of Flight 1380 with plenty of action, dogfights, and grace.

What listeners say about Nerves of Steel (Young Readers Edition)

Important note: I was sent this book for free from Amazon, but I am a slow and easily distracted reader. The only was I was every going to read it was through Audible.

I am not a young reader, and this book was not intended for me. That being said, this is a good book.

It gas a lot of good life lessons such as, treating people with kindness, trying hard, and never giving up.

The narration was on par with the audible books that I own.