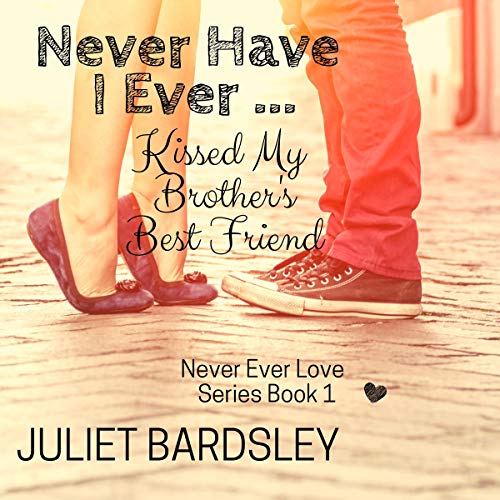 Never Have I Ever Kissed My Brother's Best Friend

Written by: Juliet Bardsley
Narrated by: Liz Krane
Try for $0.00

She’s crushed on him for the past six years. He’s always seen her as his best friend’s little sister. What happens when they’re forced together?

Gavin Mitchell is a star soccer player, the best-looking senior at Cedar Oaks High, and a potential recruit for the college of his dreams. But if Gavin doesn’t raise his English grade, all his plans of playing soccer for his dream school will be crushed. Enter Kenzie Fair, his best friend's smart little sister.

Mackenzie (Kenzie) Fair has the best friend in the world, an enviable collection of books, and the highest grades in the junior class. But there’s one thing she doesn’t have - Gavin Mitchell - the guy she’s crushed on for forever. The guy she acts like a total spaz around. The guy who also happens to be her brother’s best friend.

When the two are forced to spend time together studying Shakespeare, it’s only a matter of time before Gavin sees Kenzie as more than his best friend’s little sister.

The problem is, she still is. Is it worth risking his lifelong friendship for the chance to date Kenzie?

This is book 1 in the Never Ever Love series. All books in the series are short, sweet, swoon-worthy, and can be heard in any order.

Harboring feelings for your best friends sister can be dangerous

Mackenzie developed feelings for Gavin shortly after her father died. Gavin has had feelings for Mackenzie as well but they have both hid those feelings for different reasons. Mackenzie felt like Gavin only sees her as his friends little sister. Gavin knows how protective his friend is about his sister. This is a cute story were they both explore their feelings.

Cute story for a younger crowd

I'm not sure how I got my hands on this because I'm not usually one to read young adult, but it was cute and the narrator did a pretty good job. sometimes it would throw me because there wasn't always a difference between her male and female voices, but for a young adult book, it wasn't bad

Such a cute story

This is a very cute young adult love story. It’s a short story not a long story. I have read almost all of this series and when I seen it in audio I just had to get it and listen to it.

It’s a really cute and cheesy teen love story. The narrator does a great job!

Cute and charming story. A fun romantic comedy about a longtime crush finally being returned.

A sweet quick well written fun young romance read. This engaging storyline is fun, lighthearted, some threats, and a little drama in an amazing journey. The characters are interesting and have a mutual attraction. A great narrator that easily distinguishes between characters and really have you feeling the characters emotions. Wonderfully done. Can't wait for more from this fun series.

Never Have I Ever Kissed My Brother's Best Friend

Cute, well written story. Big brothers can be the best and worse things in a teenage girl's life. Love the way this story came together.

While I enjoy clean, sweet romances, this is the first young adult that I've listened to/read. I did enjoy the story and felt like it was well written but it just felt a little too juvenile for me (I'm 51). I thought she did well with the family dynamics and can see teens/young adults really enjoying this book.

What's a guy to do when his grades are jeopardizing your dreams? If soccer star, Gavin doesn't get his English grade up, he won't be able play and will miss out on college scouts. His best friend's younger sister has the highest grades in the class that he's failing -- What better solution is there than to have her tutor hiim?

This was my first story by this author, my daughter and I listened to it together and we both found it to be very enjoyable. This is the first book in this series and my daughter expressed interest in reading and/or listening to more (and I wouldn't mind listening to more together). I have listened to other books narrated by Liz Krane, she does a wonderful job voicing the characters. This was a short story, just the perfect length for a quick afternoon listen.

I was given this audio book at my request and am voluntarily leaving this review.

Such a cute fun story! I highly recommend. I haven’t read anything from this author before, but I will definitely be adding her to my list!