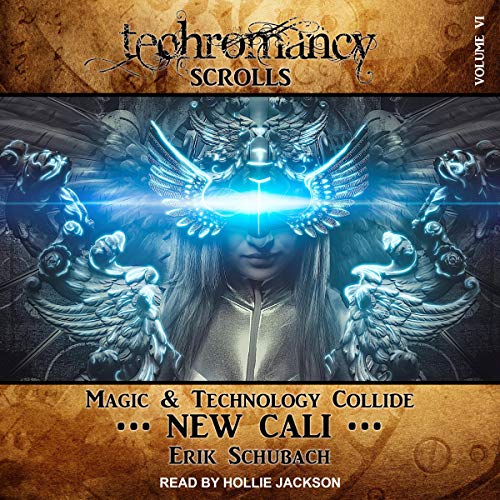 Written by: Erik Schubach
Narrated by: Hollie Jackson
Try for $0.00

Almost 3,000 years after an extinction-level event on Earth, mankind seeks to regain its former glory in a new world where magic and technology collide.

As the aftermath of the war against Avalon settles and life in the lands of Sparo returns to a semblance of order, the matron of the library, Emily, also known lovingly as the Queen of the Scrolls, decides it is time for her to return home.

It was revealed in the war that Emily possessed magic and had come from lands faraway to observe the people of Sparo and document their culture as the First Seeker of her Sect. Her homeland, New Cali, lay far to the south beyond the Fringe and out into the Uninhabitable Lands.

The diminutive librarian had determined that Sparo had surpassed New Cali in both knowledge and technology, even though they were still a people capable of great violence, and thus it was time that the two people met, to share their cultures and knowledge with each other.

An expedition is arranged, led by the Great Mother of the Mountain Gypsies, Laney of Wexbury. Laney faces her greatest challenge to date while confronting dark buried within her that is fighting to get out.

Old and new enemies abound, and if she survives what is in store for her, Laney will never be the same again.

What listeners say about New Cali

Great books overall, but paying for a book that wastes 30 minutes. If not more repeating backstory facts i would love it a lot more. its annoying to jear repated facts...not every book. But 3 to 4 times per book. Not lovin it.