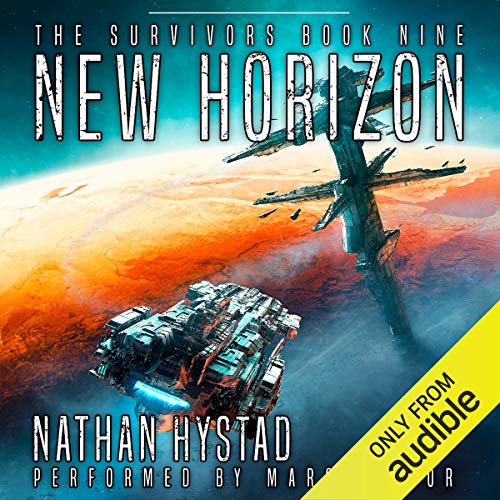 Written by: Nathan Hystad
Narrated by: Marc Vietor
Try for $0.00

The first human exploration vessel has been manufactured. All it needs is a mission.

Horizon is a state-of-the-art vessel, a hybrid born of Keppe technology and human innovation. Magnus accepts the role of captain as the new ship is launched on its maiden voyage. Dean’s thrilled to take a back seat on the adventure, but things don’t ever work out as planned for our hero.

As Horizon heads into unknown space, they search for a way to reverse the miniaturization of an entire world in their possession. With recent attacks on Haven, the crew is on edge as they encounter a strange new space station, and witness one of the V-shaped invaders docked on arrival.

Join the newly formed crew of the flagship Horizon as they learn to work as a team and halt a looming invasion from happening on Haven.

New Horizon is book nine in the best-selling Survivors series.

What listeners say about New Horizon