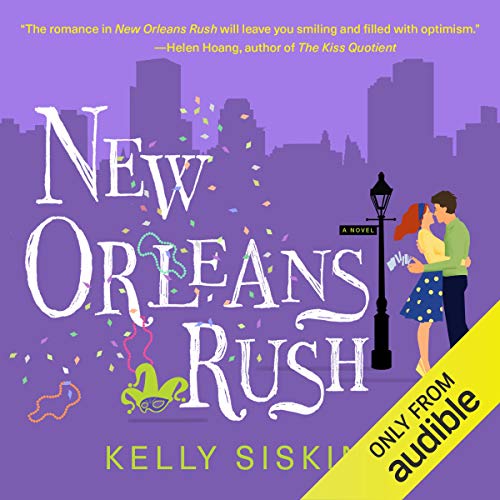 Written by: Kelly Siskind
Narrated by: Holly Fielding
Try for $0.00

“A fun mixture of magic, sensuality, and iconic pin-up girl style. The romance in New Orleans Rush will leave you smiling and filled with optimism.” (Helen Hoang, author of The Kiss Quotient)

Falling for your surly boss is a rotten idea.
Letting him saw you in half is even worse....

Beatrice Baker may be a struggling artist, but she believes all hardships have silver linings...until she follows her boyfriend to New Orleans and finds him with another woman. Instead of turning those lemons into lemonade, she drinks lemon drop martinis and keys the wrong man's car.

Now she works for Huxley Marlow of the Marvelous Marlow Boys, getting shoved in boxes as an on-stage magician's assistant. A cool job for some, but Bea's been coerced into the role to cover her debt. She also maybe fantasizes about her boss' adept hands and what else they can do.

She absolutely will not fall for him, or kiss him senseless. Until she does. The scarred, enigmatic Huxley has unwittingly become her muse, unlocking her artistic dry spell, but his vague nightly activities are highly suspect. The last time Beatrice trusted a man, her bank account got drained and she almost got arrested. Surely this can't end that badly...right?

I really enjoyed this as a whole. I loved the characters (especially Huxley 🤤) and the entire plot and premise of the story.

My only issue was with the narration. It wasn’t terrible but there were just small parts that annoyed me about the narrator when voicing Beatrice. I found she made her whiney and immature sounding. I think had I read this as a printed book I would’ve been mesmerized by it. Other than that, it was sparkling with magic & beauty.

A very fun and sweet read!

This book was cute.. a tad bit nauseating with all the “my zig zag girl” and “ my magic man” talk. But it was cute. I went into this book blind. I love the cover and that’s enough for me. I am glad that I took a chance on it. It’s not my favorite book but it was absolutely entertaining.

I feel like you have to have an open mind when reading this book. The FMC is very whimsical and light headed. She forgives everything and smiles to hide any hurts. Which sounds nice in theory but just isn’t practical and it made her seem kind of dumb when I don’t think she was. So go into this one knowing it’s going to be a little weird and roll with it.

I enjoyed this book thoroughly. Here's my tip to the reader. Do not go into this book looking for an epic story. This book was a wonderful escape. A light hearted romp through a sweet romance with minimal danger and risk to the reader. That being said, some of the sexual tension in this story definitely gave me my own butterflies.

The setting here is refreshing and modern, without a billionnaire or a duke in sight, thankfully! Just regular folks.

The narrator (Holly Fielding) was pretty good -- she did good male voices, with a variety so that you can distinguish between different male characters. I was a little disappointed that she didn't really do New Orleans accents for the supposedly "native born and bred" brothers (although she did a sort of southern one for Della). Overall, though, very enjoyable.

The narrator spoke took slowly and nearly every sentence sounded like she was asking a question. atowards the later half, she was better. But in the end, she went back to her mono-toned full speech. Her voice is nice, just no inflections. I may have given the story a better rating if it was read more enthusiastically. As for the story, there are two many coincidences to be believable. I did enjoy the story even if my rating doesn't reflect it. I love a happy ending. Slight spoiler: wish the ex boyfriend had a come uppance scene. He deserved some karma.

My heart is always pining to fall in love with a new-to-me author, but the falling is are too few and far between. As I listened to New Orleans Rush, my toes began to tingle and sure enough, a new literary crush was born. I adore the strong prose writing with memorable quirky turns of phrase, kneaded together with serious happiness, swoon worthy love, a few dashes of intrigue, and a very very satisfying end. Pair Siskind’s writing with Holly Fielding’s delicious narration and this book become a rare treasure. I just flat-out adore this read. ❤️

Using a third person point of view, Kelly Siskind tells the story of Bea and Huxley. Bea is so adorable- she is down on her luck and just moved to New Orleans with her boyfriend, who became her ex boyfriend 4 days after moving. She meetings Huxley at a bar. Her thoughts, her dialogue and the banter between Bea and Huxley were so much fun and the amusement began from pretty much the beginning of the book. Both characters were so likable, which made listening to this book a true pleasure. A great quote that showcases Bea’s wonderful personality is, “If music played, she danced.” There is also an amazing supporting cast with the brothers, Fox, Axel and Della. There is humor, a bit of danger but resolution is a fun way that totally fits in with the wonder of this book. I plan to read more of this author’s books because she obviously spends a lot of time writing lovable, quirky characters.

Holly Fielding, the narrator, did a great job. Generally calm, especially when she plays the “narrator”, she does a great job introducing emotion for each character at the perfect times. She does a good job differentiating between her as a narrator and playing each of the characters.

I received this book from #AudioBookObsessionReviewer.

New Orleans rush was a really interesting book. Beatrice ends up in New Orleans in a very unexpected way, she has loan sharks chasing her, and finds an interesting new job and romance. The story was told in the very magical city of New Orleans, which was a perfect back drop for this story. The romance does get very hot, heavy, and graphic. (A very personal preference but wanted to let others know.) The overall story was engaging, there were parts that were a tad slow for me.

I enjoyed Holly Fieldings voice a lot, but I could have done with more animation and inflection throughout parts of the book.

I received a copy of this book at my request, and I have voluntarily left this review.

I thought the story was interesting and cute. The narration was very good and brought the characters to life. I did feel that it was geared toward a younger audience than I was expecting but keeping an open mind the book was entertaining.

Love the characters! Love the Story! Just Love it all!

I am not sure how I snagged this but dang do I LOVE it! The writing flows very nicely. The story is a little different romance. The characters just sucked me deeper into the story with their lovable-ness.

I love how these two met. Very different. On a whim she makes a huge drunken mistake but it could be the One that also saves her. This girl is do fun and quirky. I love the free spirit of her. What she does and says just makes me want to hug her. Huxley is very interesting to me. His job (while a struggle for him) is awesome! His devotion to family is unquestionable. Yeah he has problems but his attitude just kept surprising me over and over.

The Marlow brothers are so great. I mean Huxley is broody. He has the huge responsibility and does magic!! Yes I said Magic! I could easily imagine the awe that Bea has while watching them perform. Then there is Axle and Fox. I love their names and attitudes and quirks that describes each perfectly.

Overall this story is one that had me hoping and wishing for these characters. I absolutely loved it and it will be going on my re-listen page for when I want a feel good story. I did listen to this on audio. The narrator did a good job. I would love to see Fox and Axel’s story.