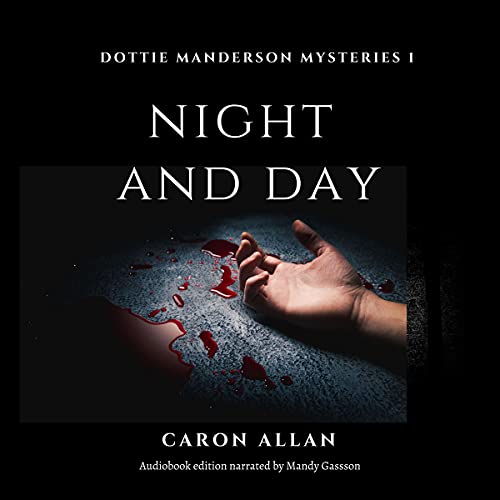 Written by: Caron Allan
Narrated by: Mandy Gasson
Try for $0.00

Dottie Manderson stumbles upon the body of a dying man in a deserted night-time street. As she waits for help to arrive, she holds the man's hand and tries to get him to tell her what happened. But with his last breaths he sings to her some lines from a popular stage show. But why, Dottie wonders? Why would he sing to her instead of sending a final message to his loved ones? Why didn't he name his attacker?

Dottie needs to know the answers to these questions and so, even though a particular, very annoying, young policeman is investigating the case officially, she feels compelled to carry out her own investigation into the mysterious death.

Buy Night and day: a Dottie Manderson mystery now and find out just who killed Archie Dunne, and just how many eligible bachelors are on Dottie's mother's list.

Extract from Night and Day: A Dottie Manderson Mystery:

When she arrived at the top of the steps, and put out her hand to take hold of the knocker, just like in a horror film the door creaked slowly open by itself to reveal a dark hallway. Dottie felt an extreme reluctance to enter, the cheerful note had gone. In fact, as soon as the door had begun to move, chills ran down her spine and her scalp prickled.

Her stomach gave an uncomfortable lurch. She knew she should leave, she felt something.

What listeners say about Night and Day