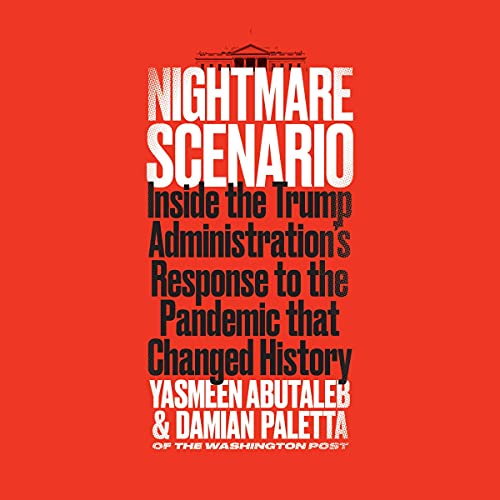 From the Washington Post journalists Yasmeen Abutaleb and Damian Paletta - the definitive account of the Trump administration’s tragic mismanagement of the COVID-19 pandemic, and the chaos, incompetence, and craven politicization that has led to more than a half million American deaths and counting.

Since the day Donald Trump was elected, his critics warned that an unexpected crisis would test the former reality-television host - and they predicted that the president would prove unable to meet the moment. In 2020, that crisis came to pass, with the outcomes more devastating and consequential than anyone dared to imagine. Nightmare Scenario is the complete story of Donald Trump’s handling - and mishandling - of the COVID-19 catastrophe, during the period of January 2020 up to Election Day that year. Yasmeen Abutaleb and Damian Paletta take us deep inside the White House, from the Situation Room to the Oval Office, to show how the members of the administration launched an all-out war against the health agencies, doctors, and scientific communities, all in their futile attempts to wish away the worst global pandemic in a century.

From the initial discovery of this new coronavirus, President Trump refused to take responsibility, disputed the recommendations of his own pandemic task force, claimed the virus would “just disappear,” mocked advocates for safe-health practices, and encouraged his base and the entire GOP to ignore or rescind public health safety measures. Abutaleb and Paletta reveal the numerous times officials tried to dissuade Trump from following his worst impulses as he defied recommendations from the experts and even members of his own administration. And they show how the petty backstabbing and rivalries among cabinet members, staff, and aides created a toxic environment of blame, sycophancy, and political pressure that did profound damage to the public health institutions that Americans needed the most during this time. Even after an outbreak in the fall that swept through the White House and infected Trump himself, he remained defiant in his approach to the virus, very likely costing him his own reelection.

Based on exhaustive reporting and hundreds of hours of interviews from inside the disaster zone at all levels of authority, Nightmare Scenario is a riveting account of how the United States government failed its people as never before, a tragedy whose devastating aftershocks will linger and be felt by generations to come.

What listeners say about Nightmare Scenario

It was informative and well organized. The narrator was easy to listen to. The facts were verified as well as they could with sources that were anonymous.

Everyone who is wondering what the hell happened in 2020 with this stupid virus really should listen to this book. Sadly, I’m afraid those who need to hear it most won’t ever listen. So glad the madman is no longer running the show. I hope we can prevent the next autocratic demagogue from taking hold here. So many people died for no reason. Just arrogance, selfish, greed and power for the sake of itself. God bless America. We need it.

Part of US history

The book’s release is too soon to be appreciated for the tragedy contained in its pages. Thanks to the author for putting this sad chapter of US history on record.

Spoiler Alert: The pig does not die in the end. #tragic #americantragedy

A political history of Covid

Nightmare Scenario is a book about the political ramifications of covid under Trump’s watch, as well as a history of the viruses outbreak, but more so the former. This book is excellent at the start, even though this crisis is still unfolding and far from over, retracing covid from the beginning was interesting to me, especially seeing the behind the scenes way Trump and others reacted. That being said, the book is overly long and follows inconsequential Trump sycophants. Still good!

The horror of politicizing a pandemic

If you want to understand how Covid devastated the US, you must first understand the pathology of Trump and the people he surrounded himself with. This book gives insight into how he thinks, and how he leads. The book lays bare the truth of what happened.
It’s devastating, enraging, engrossing and it’s absolutely tragic .
Don’t mix politics with a virus.

I teach a class on disease disaster responses. I will be using this book to help my students make sense of what they experienced, so they can do better when the next pandemic comes. PS. the Epilogue, thank you to the authors for the epilogue. could not have said it better.

don't read if you were a lab manager during this!!

I was a lab manager during all of this and chapter 4 and 13 pissed me off. My facility rarely used UTM (the transport media) before COVID. In fact, I had just thrown out expired vials at the beginning of the year, and so I ordered less than normal to replace them. When we told we would use UTM for COVID testing, I tried to order more, but my vendor was already out and I could only get a couple from my state health department. I had to raid the NP swabs from our RSV kits (if a poor baby needed that test, we could run it off of a nasal wash). I overhead nurses complain about our limited stock- I told them there was a global shortage, but I feared that other facilities were hoarding supplies and that I had just barely missed the window to successfully order supplies. But why had we been forced to compete with other facilities for supplies in the first place? Answer is in Chapter 13! It was a total nightmare!

The IDNow test kits weren't perfect, but they came with the needed swabs and QC and didn't use UTM. Exactly what we needed at the time. I'm grateful that my lab was able to get them.

Trump: The wrong man at the wrong time. Period.

This is a phenomenal book. A book about politics, the pandemic and staggering ineptitude that led to thousands upon thousands of deaths. The previous administrations mismanagement of the pandemic was in full sight for all of America to see. This book does an amazing job outlining the myriad of issues that led to the astounding failure. Trump was the wrong man at the wrong time. The antithesis of a leader. His inability to grasp the severity of the pandemic is mind numbing.

The Case For Genocide

BRILLIANT! A case for prosecuting T**** for genocide is clearly developed and explained. Mass murder from incompetence and craven self-interest will be the legacy of the MAGA movement.

A must Listen to book.

the truth we all knew but were never told until this book. Harsh reality that a president was more concerned anout being popular, than the people who died for a pandemic that could have been reduced.

A Book You Must Listen To!

If you know anyone who was affected by Covid-19, you must hear this book 📚.