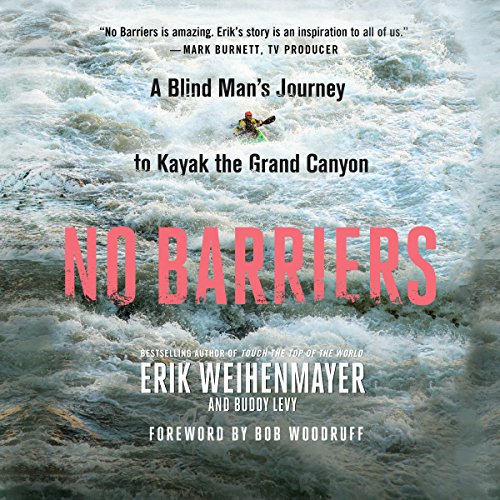 Erik Weihenmayer is the first and only blind person to summit Mount Everest, the highest point on Earth. Descending carefully, he and his team picked their way across deep crevasses and through the deadly Khumbu Icefall; when the mountain was finally behind him, Erik knew he was going to live. His expedition leader slapped him on the back and said something that would affect the course of Erik's life: "Don't make Everest the greatest thing you ever do."

No Barriers is Erik's response to that challenge. It is the moving story of his journey since descending Mount Everest - from leading expeditions around the world with blind Tibetan teenagers to helping injured soldiers climb their way home from war, from adopting a son from Nepal to facing the most terrifying reach of his life: to solo kayak the thunderous whitewater of the Grand Canyon.

Along the course of Erik's journey, he meets other trailblazers - adventurers, scientists, artists, and activists - who, despite trauma, hardship, and loss, have broken through barriers of their own. These pioneers show Erik surprising ways forward that surpass logic and defy traditional thinking.

Like the rapids of the Grand Canyon, created by inexorable forces far beneath the surface, No Barriers is a dive into the heart and mind at the core of the turbulent human experience. It is an exploration of the light that burns in all of us, the obstacles that threaten to extinguish that light, and the treacherous ascent toward growth and rebirth.

This program includes a bonus interview with the author and his climbing partner as well as a foreword read by Bob Woodruff.

What listeners say about No Barriers

what he has done is amazing but the writing is so over the top. I didn't even make it past the first chapter.

This book will help YOU navigate the challenges of life!

“No Barriers” helped me to see that- ‘WHAT'S WITHIN YOU IS STRONGER THAN WHAT'S IN YOUR WAY.’

More Than the Kayak Trip

The majority of this story is not the kayaking trip, but a collection of events, failures, successes, and inspiring people.
It speaks of suffering and figuring out solutions, going forward with loss, and the author goes into how inspired he is to keep going.
I was moved by the many stories and how inspiration is given and taken, how we can all not feel trapped and overcome barriers regardless of physical condition and the circumstances around us.

Loved the audible. The narrator was right on target with his voice. Would highly recommend reading or listening to.

This is a really powerful and inspirational book that shows that what we accomplish is solely based on how we look at the obstacles in front of us. If we tackle these obstacles with a positive attitude and a tenacity then anything is possible whether you have a physical or mental disability. People with less than you are accomplishing huge things. This book will help you eliminate the excuses!

This book has a Positive message and every story was inspirational. Everyone should read this book to understand that having a disability should not let you stop following your dreams.

Really enjoyed the book. made me think about my own barriers that I have created.

Thoroughly enjoyed this entire book. great look into the lives of others. time to self-reflect! Thanks for sharing such meaningful stories both from your own lives and those of others.

Overall, I enjoyed this book. The author is clearly an amazing man with an inspiring story. For that, it is worth the read.

But this book needs some serious editing. At times he rambled, some parts were repetitive, and sometimes it seemed he had a generous need to tell the story of everyone he ever met. Although inspiring in and of themselves, it was just too much. Some tightening up of the book would do it a great service.

That said, I enjoyed the story about adopting his son from Nepal and all the twists and turns in his story. Honestly, that was the most riveting part of the book to me.

What did you love best about No Barriers?

The story itself is just amazing.

I like how it really makes you question what can and can't be done and take no excuses. What are some disadvantages you have? Are they holding you back, or are you letting them?

Yeah, read it. It's the second best biography I read this year.