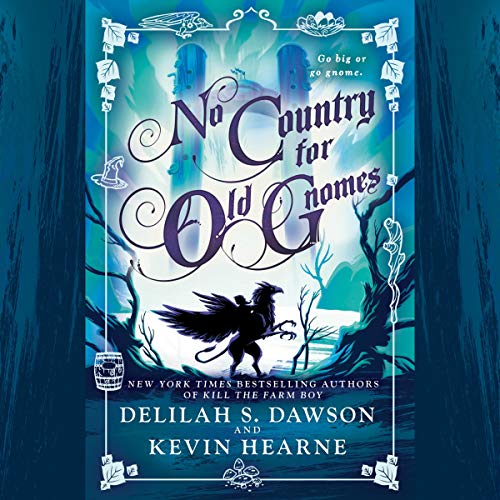 No Country for Old Gnomes

Go big or go gnome. The New York Times best-selling authors of Kill the Farm Boy welcome you to the world of Pell, the irreverent fantasy universe that recalls Monty Python and Terry Pratchett.

"A complete delight, as fluffy and fun as The Lego Movie and as heartfelt as Harry Potter and the Sorcerer’s Stone." (Locus)

War is coming, and it’s gonna be Pell.

On one side stand the gnomes: smol, cheerful, possessing tidy cardigans and no taste for cruelty.

On the other side sit the halflings, proudly astride their war alpacas, carrying bags of grenades and hungry for a fight. And pretty much anything else.

It takes only one halfling bomb, and Offi Numminen’s world is turned upside-down - or downside-up, really, since he lives in a hole in the ground. His goth cardigans and aggressive melancholy set him apart from the other gnomes, as does his decision to fight back against their halfling oppressors. Suddenly Offi is the leader of a band of lovable misfits and outcasts - from a gryphon who would literally kill for omelets to a young dwarf herbalist who is better with bees than with his cudgel to an assertive and cheerful teen witch with a beard as long as her book of curses - all on a journey to the Toot Towers to confront the dastardly villain intent on tearing Pell asunder. These adventurers never fit in anywhere else, but as they become friends, fight mermaids, and get really angry at this one raccoon, they learn that there’s nothing more heroic than being yourself.

In No Country for Old Gnomes, Delilah S. Dawson and Kevin Hearne lovingly tweak the tropes of fantasy and fairy tales. Here you’ll find goofy jokes and whimsical puns, but you’ll also find a diverse, feminist, and lighthearted approach to fantasy that will bring a smile to your face and many fine cheeses to your plate.

What listeners say about No Country for Old Gnomes

Just as delightful and funny as the first, thus had me cracking up and bust out giggling most of the time. Both Delilah and Kevin let their collective genius shine in this pun-derful work!

Luke Daniels and Kevin Hearne are a dream team.... don't ever stop guys

Unequivocally the best VO and storyline you will ever hear! Just quit reading my review and LISTEN to this book.

You will do yourself no justice in reading this book versus reading it!. I guarantee you will NOT give the characters the same personality as Luke Daniels. He is truly one of a kind and takes this sequel to even higher levels. The story will keep you laughing with the puns and makes you hope to baby Beelzebub that Mel brooks will someday find this and make it a reality. Cannot give it enough stars**********

Couldn't finish listening to it. Regret the time that I did waste trying to "tough it out "

As always, Luke Daniels gives a brilliant read. I really enjoyed this book, and it is a perfect sequel to Kill the Farm Boy. I was fortunate enough to attend a book launch event when Kevin Hearne and Delilah S. Dawson came to my local Barnes & Noble. I really enjoyed the entire night of their wonderful anecdotes, hilarious stories, and fantastic play off each other. It completely explains the brilliance behind these books. this book, and its predecessor are 100% worth the credit you spend on them.

I love the silly nature of these books. This one was better even than book one. And I love Luke Daniels narration!

Kevin Hearne is so talented

Luke Daniels for the win!

Luke Daniels is just amazing! I really am enjoying this series! Can't wait to listen to the next one in this series.

I love Hearne and always loved Daniels narration of other books, but this time the multiple gnome voices grated on my nerves. Think this will be a book to read, not listen to.

Another grand adventure in Pell

NUMBER OF HEARTS: 4
Another excellent installment of the Tales of Pell. No Country for Old Gnomes takes us on a grand adventure that starts with the Gnomes of Pell are being attacked by a group of halflings. It will take a group of unlikely friends to set everything right.

The amazingly talented Luke Daniels narrates this book for us again. Luke does an amazing job of bringing the Tales of Pell characters to life.

This was a great book that introduces us to a group of new characters and we get to see some of our old friends. I really enjoyed the Gnomes, Halfings, Dwarfs and the Gryphon. There are a lot of wonderfully fun characters.

Very much looking forward to The Tales of Pell book 3, The Princess Beard

Took awhile but this performance has a message. Stay the course, and reap the benefits.