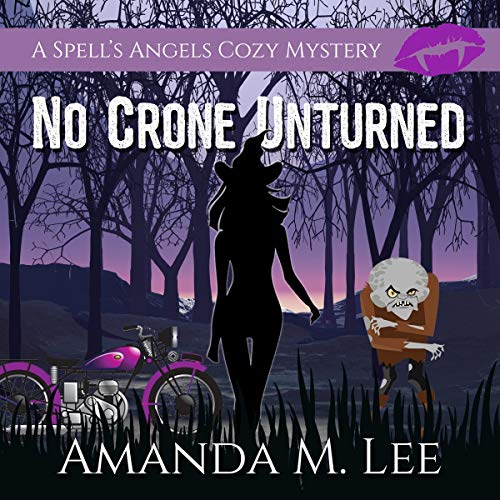 Scout Randall is on the verge of getting information about her past. Patience has never been one of her virtues, though. As she’s waiting for her source to get settled, a new problem arises...and it has fangs.

When she was a kid, a chance encounter in a park left Scout questioning the existence of monsters. Now, one of those potential monsters is back, and he’s taken up residence in Hawthorne Hollow. He isn’t alone, either.

Vampires are on the prowl, and it’s up to the Spell’s Angels to figure out what they want and eradicate them through any means necessary. That’s easier said than done, though.

Scout can’t shake the feeling that something bigger than the obvious is happening, and when her boyfriend’s close friend is infected, she realizes she has to increase her efforts if she wants to save as many people as possible.

One vampire is deadly. A nest, though? That can be catastrophic. In this particular case, the head vampire trying to infiltrate Hawthorne Hollow has a plan. And it involves turning as many people as possible.

It’s a race against time. Scout has to keep those closest to her safe, while expanding her search for answers. In the end, she might get more than she bargained for on both fronts, if she can survive long enough to see the light at the end of the tunnel.

What listeners say about No Crone Unturned

Darn - I Finished This Too Fast

Sure wish I could pace myself cuz now it will be forever (in my mind) before the next book is out and there are so many unanswered questions turning around in my head! The development of the characters is amazing and their "special skills" are funny, scarey and awesome. Amanda M Lee is one of my favorite authors and her pick of narrators seem to be right on for the different series/story. Keep the Audible coming.

I am enjoying listening to this series. I read it a while ago so listening to it know brings back good memories. I love the snark!!

This audio will leave nothing unturned

Book 3 in the series. This is not my first from the author and I love Meghan Kelly. The author wrote a well rounded story , detailed and strong characters . Some parts will have you laughing so hard . It has motorcycle scenes which I loved. Some characters were from other books .

Meghan Kelly performance is fantastic. You can tell by her tone which characters is which. She brings the story to life

I keep listening to these books over and over. I love the characters and they just click for me. The only reason I didn't give the book a full 5 stars is I find the inconsistencies in Scout's health history, education, and with this book the additional kissing before brushing teeth -- frustrating.

the story was good; but, PLEASE do something about the editing.. (time between chapters. far too long / uneven. sometimes makes you want to check to see if it was accidentally paused or turned it off.
I play stories to fall asleep by and the uneven chapter spacing often wakes me to check for pauses, etc. BEYOND ANNOYING (but not enuf to stop me continuing the series).

I loved this series, Scout is one of my favorite characters. Her quick wit and snarky come backs have me cracking up. Vampires witches and motorcycles! Bring it on. Meghan Kelly has done an amazing job through out this entire series.

This is the third book in the Spell’s Angels series. This time, vampires have come to town to play. Scout encounters a mysterious woman from her past, who knows Scout, though Scout doesn’t remember her. Scout again hears herself referred to as a “child of the stars” but no one will tell her what it means. The adventure continues on as Scout tries to fill in the missing pieces of her life. I couldn’t put it down.

I must say I love all Amanda lee's books.But this new series is Fantastic !

Scout is very powerful, and very arrogant about it. Shades of Zoe in Covenant College series. Thrilling stuff. Good narrator!