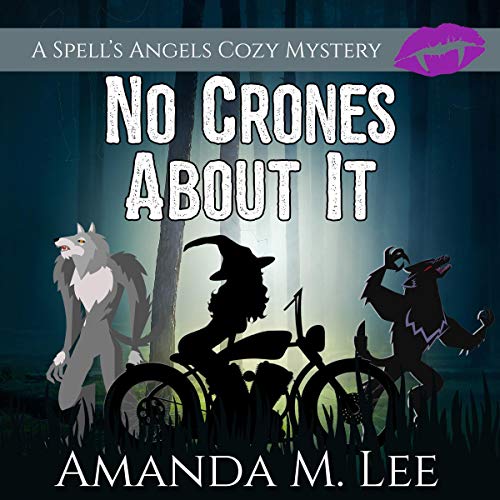 No Crones About It

Scout Randall is settling in with the Northern Lower Michigan branch of Spell’s Angels. She’s feeling bold, brash, and just a little bit flirty, thanks to her burgeoning relationship with Gunner Stratton, a shifter whose father happens to serve as the chief of police in Hawthorne Hollow.

Things are going well...until they’re not.

A group of shifters who used to live in the area have returned, and they’re up to something. Right from the start, Scout is suspicious, but she can’t quite explain why. Then, when a local homeless man is found dead - with Scout’s name literally carved into him - she starts to believe that she’s being set up to take a fall.

Gunner is determined to help. His history with the shifters in question makes things difficult, though. On top of everything else, it becomes apparent that the dead guy’s ties to Scout run deep...like genetically deep. He’s related to her, and for a woman who was abandoned as a child, it’s a hard blow to absorb.

Gunner is determined to stick close as the warring wolves close ranks and start issuing threats. It’s going to take everybody working together to find the answers Scout desperately needs, including uncovering the secret of her past. When one of their own is taken, Scout has no choice but to put her full cache of magic on display.

It’s going to be a fight to the finish. Rival gangs going at one another, and only one side will be victorious.

Which one will it be?

What listeners say about No Crones About It

Scout Randall abandon at a fire station when she was young, has magical powers and now as an adult belongs to an investigative team called Spell’s Angels. Scout and Gunner; her love interest are investigating the mysterious torture and murders that come their way...to frequent to be called an isolated incident, especially the victim Scout was not aware she was related to.

Turmoil among some of the packs and previous members of the community has increased the discord in the town. Secrets are not always revealed and tempers can get the best of some as they try to discover what's going on.

I loved Book One in this series. Book 2 however fell a little flat for me. While Meghan Kelly gave voice and personalities to all her characters, I felt the story didn't flow easily for me. Scout, is a strong woman, yet with all her whining and needing time to sleep she felt like a weaker character in this book to me. Also I didn't understand how some of the secondary characters in this story took up so much space and didn't really appear to have a sense of impact to the flow.

It was a fun listen but this book didn't grab me as much as book 1.

Good but too short.

This needs to be combined with its successor. The storyline is good but it doesn't feel like a whole book. Maybe I'm just getting tired of using 3 credits in these cozies for the same experience we could get for 1 in other genres, but the end of this book annoyed me when it didn't feel like it'd even gotten to the meat of the story. Combine these short novels like others are for a great book!

Great as always!
Now I want pickles dipped in tomato juice. Yum!
And omg wow totally did not see that coming. I won’t say what but I usually see things a mile away but not this twist. Gotta read or listen to find out. 😘 ENJOY!

Good series. Strong female lead. Nice narrator. My second time through the books. On to the 3rd.

This book does a lot to connect Scout's story to the growing universe. It teases at the possibility of future encounters with some known players in the universe. It also goes a long way to start us down the path of Scout's mystery about her origins. It is fantastic, the only downside is having to wait for the next book.

CANNOT with this narrator

I honestly don't know if this story is bad or if I am just incapable of getting past the narrator!!

The story is continuing to grow and the characters are coming alive. I cannot wait to listen to the rest.

one of those books that you just can't put down

I absolutely love this book there's so many twists and turns and I couldn't figure out which was going to happen next I loved all the surprises in it and it just kept me completely enthralled!

I think I turned into a crone just trying to get through the book, don't think the series are any better