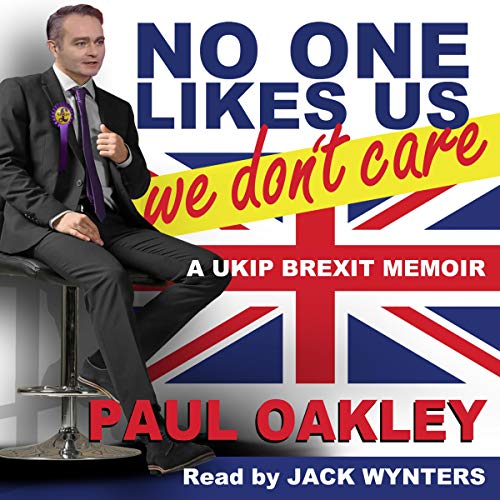 No One Likes Us, We Don't Care

Written by: Paul Oakley
Narrated by: Jack Wynters
Try for $0.00

The hilarious tale of the UK Independence Party's journey from rags to riches and back again from a front-line activist.

Paul Oakley had five minutes of fame at a Young Conservative conference when he ripped up a copy of the Maastricht Treaty at the end of his speech attacking John Major's European policy. He stood for the Tories in the 2005 general election but failed to lie convincingly enough to be added to the A-list of candidates when David Cameron became party leader. So in 2011 he renounced his Tory membership in a fit of pique and joined UKIP.

Although second-placed candidate on the UKIP London MEP list in 2014, his Brussels posting was thwarted. If the two counterfeit UKIP parties and backfolded ballot papers weren't enough, there was a killer blow. A false allegation of sexual assault by a homeless Bulgarian was made against his right-hand man which hit a tabloid front page on polling day. Commiserated by the party with the post of London regional enforcer, he then had to deal with all sorts of members' escapades, not least those of loose cannons Winston McKenzie and Islamosceptic Anne Marie Waters.

Paul Oakley plotted with Nigel Farage and Arron Banks to knit a net for UKIP MP Douglas Carswell but that spoilsport left the party just before this net was cast and so cheated the hangman. Having cleverly wangled his way to take over as candidate for Carswell's Clacton seat, Oakley performed abysmally there in the 2017 general election and failed to be elected. Again.

Consoled once more with the post of General Secretary which dealt with a higher calibre of misdemeanours, Oakley took on the solemn task of knifing then-leader Henry Bolton and forcing him from office.

Paul Oakley is a firm supporter of new leader Gerard Batten who saved UKIP from bankruptcy in the face of a repugnant legal case and has increased membership by 50%. Yet he remains unconvinced of two things. Firstly, that Gerard's advisor Tommy Robinson is the pantomime villain he is portrayed to be by the mainstream media. Secondly, that Banging On About Islam is wise at a time when all the forces of the establishment are conspiring to betray Brexit.

And if Brexit is betrayed both Oakley and UKIP itself pledge that that British politics will thereafter become Emotional.

This personal history from a populist insider also covers the adventures of David Kurten, Peter Whittle, Steve Woolfe, Suzanne Evans, Paul Nuttall, and all the others you've forgotten about.

What listeners say about No One Likes Us, We Don't Care