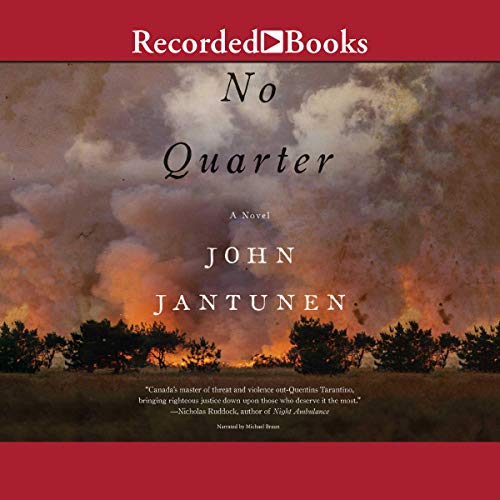 Written by: John Jantunen
Narrated by: Michael Braun
Try for $0.00

In this blistering new novel from visionary author John Jantunen, three young men with a history of violence are on a collision course set against the idyllic backdrop of northern Ontario’s cottage country.

Rene Descartes, a recently released ex-con, is living in a ramshackle trailer only a short distance from Hidden Cove, a secluded paradise where the country’s rich and famous relax in opulent gated summer retreats. A savage attack against Rene by the son of the fourth richest man in the country spurns a brutal act of revenge that will ignite this paradise into a fiery vision of hell on earth.

As the flames threaten to engulf rich and poor alike, only Deacon Riis, a small-town reporter haunted by his own past, suspects it wasn’t Rene who set Hidden Cove ablaze but someone with a far more sinister agenda: to write into life the apocalyptic world imagined by the late George Cleary, a local novelist who was convinced that the end of times is now.

What listeners say about No Quarter

Clueless at the end

A mystery that takes a very very long time to get to the mystery. Clumsy. Disjointed. 2 stories. I experienced this story as one where the author envisioned this tale clearly in his head but failed to effectively execute it in a way where the reader can also adequately understand what the author could in his head.
The story started out well. That's where the preview came from leaving the impression that the story would follow similarly. But, no. Not far into the tale, the story begins to jump with no warning between different characters' perspectives and times. And it's a lot of storytelling (dad telling 1 to a son, Deacon reading from 1 of George's 12 novels, Deacon retelling 1 to himself, rebellious teen retelling 1 to himself, story detailing why Taylor's dad's limo driver chose that job) and too much internal monologue within this telling of a story, which was tiring and became boring. On top of that, the book includes telling us what went on during scenes in a movie. It was all too much. The narrator's acting of these parts was what made it bearable...barely.
Most of the story, way more than I would like, turned into Deacon's coming-of-age story. The unraveling of Deacon's story seemed clumsy. It flowed like this book is comprised of 2 different, albeit related, stories. And that's not what I sought or expected. Then, about 4 hrs into the story, the idea of a secret is dropped.

I'm so angry that I spent 11 hrs of my life listening to a story about a man reading 12 stories he loved during his childhood. I kept listening because I thought that this would stop, and I had to listen until that point in order for the story to come together, to finally make sense, to show itself more than telling me about Deacon reading 12 damn stories! Grrr.

This book has the most abrupt and unfulfilling conclusion I have ever experienced, and I've downloaded over 1400 Audible books! I hesitate to even call it an ending. I don't know what it was.