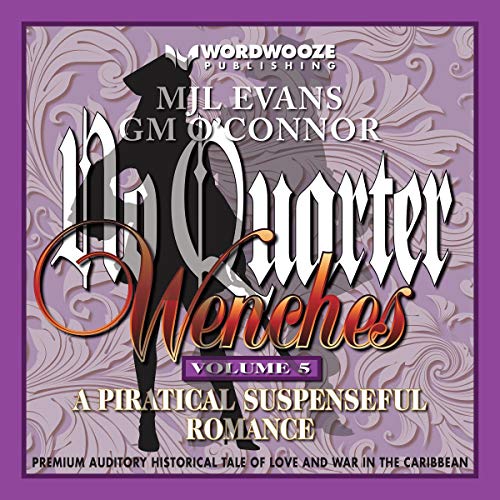 The adventures from No Quarter: Dominium continue with wenches!

Volume 5 of 5. The Wheel of Terror comes to Port Royal!

Pirates under Laurens de Graaf seize hostages and the standoff begins. Capitaine la Roche holds the waterfront as his men are trapped in the city. Allegiances change, and Lord Crisp stakes his claim on Port Royal and Atia, who intends to take a piece or two with her. The Freebooters take Church Street, and the battle for the Brethren of the Coast begins.

In 1689, Atia Crisp finds herself imprisoned in the wickedest city on earth, Port Royal, Jamaica, while the refugees from Strangewayes’s plantation in the Blue Mountains are on the run and seeking a new home, deep in the Caribbean. Captain Jean-Paul la Roche must get them to safety and find a way to liberate the woman he loves, while waging a war against the English with the pirate Laurens de Graaf.

While besieged people suffer and starve, a group of women form a secret and illegal society deep from within the bowels of the city called: Wenches. A network that deals with smugglers, merchants, cutthroats, and thieves. Dragged into the struggle for supremacy of the Caribbean, the women are divided and find themselves engulfed in bloodshed. The pirates of Port Royal and former enemies may be their only hope of escape.

What listeners say about No Quarter: Wenches - Volume 5: A Piratical Suspenseful Romance

What a fun continuation of the pirates in the Caribbean. Anne Marie Lewis did an excellent job of narrating it. I love her accent!