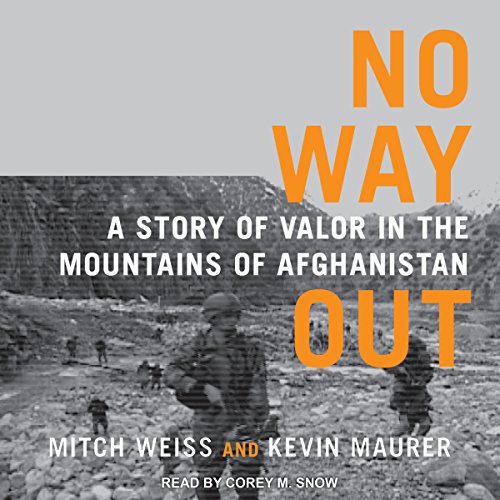 In a remote enemy-held valley in Afghanistan, a Special Forces team planned to scale a steep mountain to surprise and capture a terrorist leader. But before they found the target, the target found them. The team was caught in a deadly ambush that threatened not only their lives but the entire mission.

The elite soldiers fought huddled for hours on a small rock ledge as rocket-propelled grenades and heavy machine-gun fire rained down on them. With total disregard for their own safety, they tended to their wounded and kept fighting to stay alive. When the battle finally ended, 10 soldiers had earned Silver Stars - the army's third highest award for combat valor. It was the most Silver Stars awarded to any unit in one battle since Vietnam.

Based on dozens of interviews with those who were there, No Way Out is a compelling narrative of an epic battle that not only tested the soldiers' mettle but serves as a cautionary tale. Be careful what you ask soldiers to do, because they will die trying to accomplish their mission.

What listeners say about No Way Out

This book was well put together and well narrated as a former military myself, this book brought tears to my eyes.

Thank you for share this story. It is now part of history.
May it save others

Our Warriors...Sent to Die, Meant to Live

While sadness can be the overwhelming and helpless emotion felt for these Heroes, anger then sweeps in with the ineptitude and selfishness of the ultimate superior who made the decision to send our American Warriors their death letter.
Defying all odds and banding together, the spirit of CK came back with our heroes theu overwhelming odds. I am a proud American and rather than be saddened, angered and embarrassed by Politicians and Career-Motivated Generals, my love for the Warriors that band together to bring their brothers home alive after each Mission gives me eternal hope that “Good” lives in in this world.

The Bravery and integrity of our fighting forces of the United States never cease to impress me and make me so proud of them. but Mission planners that knowingly put these troops In Harm's Way knowing the odds are so highly stacked against them is unconscionable. the book is excellent. The story is both heroic and sad. The leaders that plan this mission should be kicked out of the military and lose any benefits they have coming to them.

I also saw the political side of the military. To many times the field grade officer's did not want to hear the truth on how Afghan soldiers were progressing. The truth needs to be told.

It's a compelling story with a solid narrator but it's told in chronologically overlapping story lines from way too many of the participants. Not my favorite way to take in a story but it's still a good listen.

Let the truth set you free.

Just another example in politics interfering with a combat mission.
Drive on SF brothers. your OEF 2005-06 brother.

Narrator was a bit boorish while telling the story of probably the most significant day in these mens life. However,the individual backstories allow you to get introduced to all of these variable men striving to accomplish one single goal(mission).
Once the story gets moving and you have the ability to recognize the individuals from their perspective it moves quickly and intensely as it should given the story line. I would recommend this for the price. More importantly, there are some serious lessons to be taken from the operation and the story needed to be told in an unsanitized way.

Good story made great by narrator

Excellent narration by Corey Snow made this well-written book a joy to listen to.

It’s humbling to read the lengths our military will go to do the right thing for the right reasons.