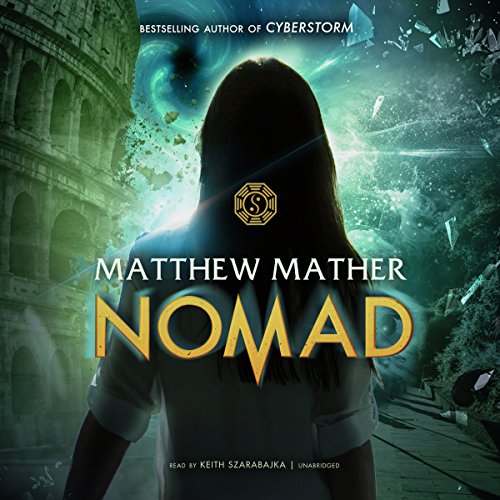 Written by: Matthew Mather
Narrated by: Keith Szarabajka
Try for $0.00

Something big is coming...big enough to destroy the entire solar system...and it's heading straight for Earth. That's what Dr. Ben Rollins, head of Harvard's exoplanet research team, is told by NASA after being dragged out of bed in the middle of the night. His first instinct is to call his daughter and wife, who are vacationing in Italy: Something is coming, he tells them, a hundred times the mass of our sun. We can't see it, we don't know what it is, but it's there. They're calling it Nomad, and it's coming fast. In just a few months, the Earth may be destroyed.

The world erupts into chaos as the end approaches - and Ben discovers that his wife and daughter are trapped in Italy. The key to humanity's survival may rest in the final answers he pieces together in the midst of his frantic scramble to find his family before Nomad swallows the planet.

What listeners say about Nomad

Loved this interesting story! Cant wait to get the next in the series.Everything included...mystery..romance..intrigue and science!

not as awesome as other books by MM.

The only thing I didn't like was the completely unrealistic main character Jessica. The facts about her were contradictory. She is a scientist, a well-endowed lady, a well-known extreme sports junkie, a car thief, etc. But she seems like an idiot. She was too many things.

She'll be coming down the solar system!

Where does Nomad rank among all the audiobooks you’ve listened to so far?

Top third for sure. For a dystopian themed book, this one alot going for it. Family drama, tribal issues, science, there is a great deal going on here.

What other book might you compare Nomad to and why?

Gosh, the nuances of this one make it unique. Any of the "something heading for earth that will kill us all off" genre would fit. That said, this one is complex and has ( in particular ) family relationships that add to the story and make it a fascinating listen.

He was consistent, creative and added intensity to what might otherwise be some dry science sections. A wonderful clear and powerful reading.

For the genre this live in, this is a very rich and satisfying listen, with a strong balance of science and drama. It is the start of a series as well, and I look forward to continuing the adventure. Highly recommended.

I tried this book twice because the idea sounds great, and I read another book by this author,Cyber Storm, and it was fantastic, but this book is not. The characters are annoying, and I did not like the narrator’s voices.

Nomad by Matthew Matter and narrated by Keith Szarabajka is one terrific thriller! It hooked me right away and it didn't stop at all! There were lots of stories going on inside the bigger story . It wasn't like the fact the Earth was in danger wasn't enough, there are more thrills added to this that really kept the suspense high. Great characters, plot, twists, suspense, science, and action going on that made this book special! Very unusual danger that is heading toward Earth. To be a movie too!
The narration was excellent!! Great performance!!!

main plot chopped in pieces by rather flat subplot

too little plot around actual science. too much psychology and relationship mush.
the basic doomsday premise was good.

So I'm kinda a space nerd. I spend way to much time with my head in space. This means that when Mathew Mather started quoting actual scientific fact, and at the time ongoing research, I was obviously floored. he did an amazing job of looking at actual science! I will be starting book 2 tonight!

Boring. Had this book began where it ended it may have at least been exciting if still not interesting. I couldn’t have cared less about the main characters. Jess is supposedly a woman in her twenties who could move to a foreign country on her own? More like she’s a petulant child who says and does moronic things just to add small scale personal drama because a plot involving the end of the entire world is too impersonal to relate to - or even worse simply because the plot said she needed to act in such ways.

I always say that an average three star book is better than a three star movie. For one star books and movies the same does not hold true; for at least with a one star movie the suffering is generally over within two hours.

Surprised at the enjoyment

I never read these type books. I'm a cozy mystery kinda girl. When I got the audio of Nomad so inexpensive, I said, "meh, why not listen". It started slow for me and that is probably cuz I was expecting not to enjoy it. And soon enough, I couldn't stop listening. I could feel each characters perspective to the Nomad crisis cuz the writing was great. And surprise, I enjoyed the story. I understand it's not out of the realm of reality for a Nomad situation and I'm intending to enjoy every day and leave this earth being warm, listening to music, wearing my shades laying in a grassy field...safe and secure :) Thanks for the unusual story. I will be getting the next installment.

Scientifically accurate, socially accurate as well as very possible as it regards human nature and rich with well developed character. The ploy moves like a force of nature with the same impact as the true prodigious the two black holes.
Story and narration drive this story at a place that forces you to listen non-stop until the timely explanation of the science by the author at the end.

It is nice the science

Supposedly may be correct. I really hope there is more of that in the following books, because the "criminal drama" and the story is not very good

Where does Nomad rank among all the audiobooks you’ve listened to so far?

About in the middle. The premise is good but then the author HAD to start in on the whole government conspiracy theory.

Which character – as performed by Keith Szarabajka – was your favorite?