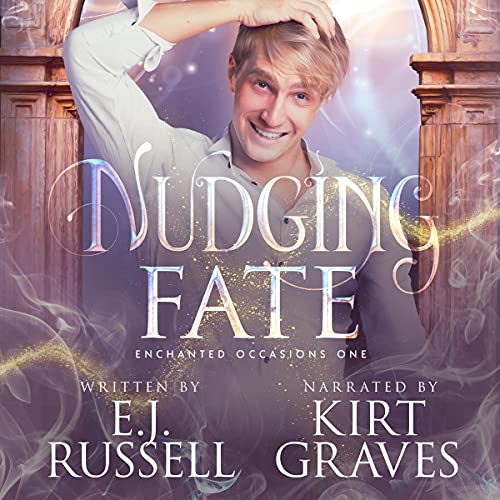 With his heart’s desire at stake, can he resist giving Fate a little nudge?

Half-norn event planner Anders Skuldsson is under strict orders from Asgard not to meddle with Fate. But with Enchanted Occasions’ latest booking - the competition for the hand of Faerie’s one true prince - crashing around his ears, it’s really, really, really difficult to toe that particular line. So...if Andy just happens to pose as a contender for the prince? It’s an emergency, damn it. Besides, it’s only temporary, so Odin can hardly blame him. Right?

If Conall of Odstone hadn’t sworn a blood oath to protect his half-brother, Prince Reyner, he’d murder the idiot himself. Rey was supposed to be here, choosing a mate before being crowned and wed. Instead, he’s disappeared, leaving Con to impersonate him. Again.

But when Con meets Andy, his anger turns to desire...and despair. Even if Andy forgives him for pretending to be someone he’s not, how could a man as appealing and accomplished as Andy - a man who’s eligible for a prince’s hand, for pity’s sake - settle for the court outcast?

As for Andy, his burgeoning feelings for the prince are both unfortunate and hopeless because hello? Half-norn? Faerie prince? Not exactly a match made in Valhalla.

When the Faerie Queen herself hands down an ultimatum, the double deception isn’t their only obstacle. Unless Andy makes the right decision, both their fates could be sealed by...well.... Fate.

Nudging Fate is a 54,000-word paranormal rom-com featuring mistaken identity, royalty in disguise, interfering coworkers, an iron knight with a soft heart, a temperamental goblin chef, and a guaranteed HEA.

What listeners say about Nudging Fate

This was such a wholesome adorable romance.

Andy and Con were so sweet together and I loved the dynamics of their relationship.

The setting of the story was interesting and the world building was descriptive, rich and engaging.

This was such a great story! I fell in love with Con & Andy big time and the world they love in, I wish I could live there too. Big prop’s to Graves for the narration, awesome job as always.

great story and narration. really enjoyed it
second book in series not on audible so kinda disappointing.

I loved this audiobook! The story was a lot of fun and really cute. Andy and Con were such a great couple with some really cute moments together. They fit together so well and complimented each other once they got together. It was a lot of fun to see them develop their relationship. The world building made the story even better. This author and narrator combo was perfect for this story and I can’t wait to get to find out more about this world and get to know even more of the characters.

Such a cute listen!

This book was a really fun listen! The world EJ Russell has built is rich and varied, and sets this up to be a really fun series. As always with this author the story is fast paced and really comical, it’s hard to listen to this without a smile on your face. Andy and Con were really loveable characters and I enjoyed watching their story evolve.

As always Kirt Graves did a fantastic job at narrating this story.

Yet ANOTHER winner from writer E. J. Russell and this one in audio format narrated by the simply incredible Kirt Graves. The author gives us a double deception romance with a fantasy version of The Bachelor! Half-norm Anders Skuldsson is a planner who is managing a special event. The booking involves a competition for the hand of Faerie Prince Reyner and he takes his job seriously, wrangling the male and female contenders while ensuring that everything is picture-perfect for the occasion.
Catastrophe strikes in the form of the Prince who decides to get his half-brother Conall of Odestone to stand in for him during the preliminaries of dinners and dates with the competitors. Though Anders is unaware of the first catastrophe, he is a party to the second one when a competitor decides to poison the others leaving them too sick to meet with Prince Reyner. The magical iron knight makes sure the miscreant suffers the same fate, leaving no contender available to make a bid as the prince's consort. A coworker comes up with the best possible idea given the circumstance, she puts Anders forward as a contender! Claiming that he had suffered a rough trip where luggage was lost or stolen, Anders takes his turn at meeting with the prince only to discover a considerate, charming, as well as handsome man! Too bad he's the prince, or so he thinks.
Standing in for Prince Reyner as he has done so very many times before, Conall is delighted by Anders who is handsome, charming, and considerate! Too bad he is charged with selecting his half-brother's consort when he'd like to have Anders all to himself. But Andy is there to marry the prince and not a half-brother imposter. And Andy is not really a contender at all, just a half-norn event planner trying to hold the competition together. When it's all said and done, the actual prince has made his own selection while living it up in Los Vegas and come back in time to claim his crown. But fate (and NOT Anders's doing) has plans of its own.
Author EJ Russell engages in some of the BEST writing legerdemain imaginable in keeping readers from going crazy with the double deception that occurs between Conall and Anders! After establishing how perfect they would be together, she turns the readers' focus on all the other truly delightful events in the book, leaving them to enjoy other aspects of the story. Just before readers throw their arms up in despair, the deception is revealed and the actual prince is back in the picture only to take the readers off on another development in the narrative. The story ends with an OMG moment that many would not expect! With incredible world-building, wonderful characters, a beautiful premise uniquely executed, Nudging Fate is ABSOLUTELY brilliant!

This is such a cute listen! Con and Andy are just so cute together. I love this world that E.J. Russell had built. This is such a funny and sweet listen. I absolutely love Kirt Graves narration. He is one of my favorite narrates and I love listening to one of his narration. He just makes me love the story even more.

That was an AMAZING start of a new paranormal series!
I loved every second spent with Andy and/or Con. They are both LOVELY.

The story is fast paced, dramatic, complicated and VERY entertaining. There is a lot of characters and they all have their special role in Enchanted Occasions. I got sucked into the story right from the moment I learnt Con was pretending to be Rey, the real fae prince. All in all, I don't have to be from Asgard or other paranormal realm to know it can only lead to some serious problems.

It is a low heat story, but I think it is safe to say that it is a love at (almost) first sight type of romance since everything happens FAST and it doesn't take long for both MCs to declare their love. At the same time, the situation is difficult and nothing is as it seems which makes the the love story and the prince's coronation even more intriguing. The whole book feels like a old fashioned fairy tale with a sweet HEA, bad queen and love winning against all odds. I really can't wait to read / listen more books from Enchanted Occasions series.

The audiobook version was FABULOUS. Kirt Graves was a perfect choice for this book and it was a pleasure to listen to him. All characters were voiced perfectly and I loved this audiobook!

I admit that paranormal books like this are not my usual MO. In fact, I had no clue what most of the characters are (I have never once heard of a norn). But if you’re looking for a quick afternoon romp, this one is the way to go! Andy is an event planner whose company is on its last chance, due to an unfortunate outcome at a previous event. Que “bachelor-esque style” dating event to help Prince Rey find a suitable match, complete with wedding at the end. Prince Rey enlists his brother to stand-in as him (thanks to a lookalike spell) and takes off to have more fun elsewhere. I’m sure you can figure out what ensues when Andy and “Rey” are forced to spend time together during the days-long event. Add in an evil Queen/mother and you get all the good cornerstones of a fairy tale story. While not overly-angsty, I’m not sure I would list this book as a rom-com. Maybe it was because you knew the underlying issue (Conall pretending to be Rey) was going to explode at some point and it put a damper on the storyline. While a satisfying romance, the steam level was PG rated—as in, anything truly steamy happened behind closed doors, so to speak. Kirt Graves was, as per the usual, a great narrator choice for this!

I’m a fan of EJ Russell’s so I was looking forward to listening to this book. I love the worlds she takes us to. Andy is an event planner and is hired to find a consort for the fairy prince. Con is the half brother to the prince and makes a deal to be him through the process. Due to circumstances Andy ends up going on a date with the “prince”. But he has a secret of his own. Their relationship is really sweet. They spend time together and get to know each other. I loved Con. He has a huge heart. There are some great side characters too! Kirt Graves narration was amazing!