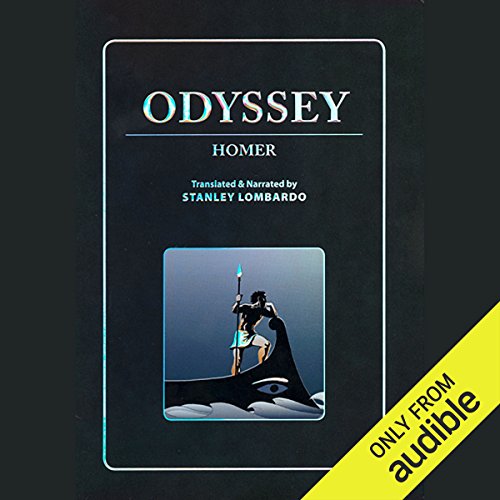 The Odyssey tells of the heroic journey of Odysseus after the Trojan war. In his attempt to return home to Ithaca, this ancient hero is faced with obstacle after obstacle, mythic creature after mythic creature. This is an epic poem encompassing an epic journey as famous as it is classic.

Translated and Narrated by Stanley Lombardo. Introduction by Susan Sarandon.

"Stanley Lombardo provides a welcome translation, contemporary in its rhythms, assurance, and clarity....this version of the Greek classic sounds honest, intimate, and, most importantly, clear." ( AudioFile)

What listeners say about Odyssey

Fall in love with this new translation

Even more captivating than its sister saga "Iliad" this translation and performance succeeds brilliantly in bringing a historic classic alive for the modern listener/reader. The images are vibrant, the saga captivates. Absolutely a fabulous listen - it is as if you are sitting around a fire as the storyteller takes you on a journey!

Enjoyed the narration and translation very much. It is better to listen to Homer rather than read the translations on paper.

Would you listen to Odyssey again? Why?

Here is an audiobook that I will listen to and recommend to others because the story is timeless and the rendering in word and in voice is so fresh and clear.

What was one of the most memorable moments of Odyssey?

It was when I began to realize just how foreign to our modern way of thinking is the whole pantheon of gods and godesses quarreling and playing tricks that formed the traditional foundation of ancient Greek life. We may view nature and the things that happen to us as the result of impersonal, physical forces or, perhaps, those forces being superintended by a benevolent, omnicient, omnipotent and omnipresent God. But o the Greeks of Homer's day, either notion would have seemed sacreligious and absurd.

What does Stanley Lombardo and Susan Sarandon bring to the story that you wouldn’t experience if you just read the book?

Reading his own translation, Stanley Lombardo gave the characters the right pacing and inflection. Although he is not as gifted a reader as my favorite narrator, John Lee, the modern translation was so refreshing and clear that I didn't miss John's well-modulated tones. Some may feel that this translation was too 'free' compared with the cononical version, but it felt more natural to me. Susan Sarandon's voice was pleasant and her comments were helpful to visualize the structure of the chapter and to learn about the cultural aspects that are unknown to most of us. For example, Homer expects his audience to understand that women slaves washed the tired bodies of men, but that custom is as strange to us as their view of the dead in Hades. So having those brief introductions read by her was very helpful to me.

It was when Odysseus, disguised as a beggar, came back to his home and his faithful dog, Argos, dies after recognizing his master. Odysseus cannot allow anyone to realize that the dog recognized him, so he hides his tears. I am still very touched just to remember that scene representing faithulness and love.

Rumor has it that Prof. Lombardo plays the drums in the musical interludes introducing each chapter. If so, his drums and the haunting melody on a flute are a portal to move from Susan Sarandon's helpful introductions to travel back to the story. Penelope comes across as a strong hero in her own right and not some shrinking wallflower. Trying to imagine what life was like for even those at the top of society was quite a stretch.

THIS is the way Homer was meant to be LISTENED to

I have many translations of Homer ...Fitzgerald, Fagles etc ... and have begun them all. Finished none. Something always bothered me. Finally realizing they seemed "contrived". Reading them also seemed ... wrong. Homer was spoken ...even performed. Yes it's all been said but ... I speaking Italian fluently and realize translating Italian poetry to English in the same meter with forced rhymes (English famously not as Poetic as Italian or Greek) is iffy at best. I am also a writer of poetry, music and musician. With Stanley Lombardo it sounds "natural." Unforced. And ...most importantly, natural, understandable and entertaining which were and are the first principles of any entertainer. With which Homer was certainly most concerned. Closing my eyes ...with a "wine dark glass with cut apples and pears" soaking in it and a good cigar) outside. THIS is as close to imagining Homer reciting. This is how life should be lived.

Great Translation, Easy on the Ears Too

What did you love best about Odyssey?

Mr. Lombardo's translation isn't poetic, but The Odyssey was originally an oral epic, meant to entertain and instruct the common man, (not the highbrows of the day). This translation is down to earth and easy to understand without losing any of Homer's dignity, so get ready for some swashbucking.

Sound quality is excellent for Audible, Ms. Sarandon gives a summary each chapter at its beginning, while sometimes unnecessary, this makes the story easy to follow. Mr. Lombardo does an excellent job reading his translation and speaks very clearly. Even though I'm a hardcore LOTR fan I still think that Lombardo's reading seems more natural than Sir Ian's reading of Fagles translation. Also the music in between chapters is nice and won't destroy your ears (like the audiobook for the Fagles translation) will.

I had just finished listening to Dan Stevens' remarkable reading of The Odyssey, translated by Robert Fitzgerald. But my Homer itch hadn't been fully scratched. For relief I turned to an old favorite - Stanley Lombardo reading his own translation of The Odyssey.

Lombardo's version is equally remarkable, but in a very different way. Where Fitzgerald is stately and heroic ("lift the great song again"), Lombardo is earthy and immediate. Lombardo developed his version originally for public performance, and his reading reflects that: it's brisk, rhythmic, and varied.

I don't read Greek, ancient or modern, and can't recommend one over the other in terms of accuracy. What I CAN say is that both are successful narrative poems in English, although they seem to be almost intentionally at opposite ends of the diction continuum.

One of the things I enjoy about the Lombardo recording is that Susan Sarandon provides a brief synopsis of each book beforehand. Another thing I like is the musical theme that plays as each episode begins. I've heard people complain about the fact that it's the same theme each time; but to my way of thinking, that's an asset. It serves to set the mood and it ties together the various parts of this extremely varied work of literature.

I had to read The Odyssey for a college course, and having an audio book alternative has been very helpful as I can "read" while driving or cooking. I really enjoyed this audiobook because the sound effects were fantastic! I could really put myself in the story.

The book is in modern day slang which would be perfect for the teen who is required to read it. But for the seasoned reader who is looking for the flavor of Homer, it is a disappointment.

Am disappointed in the venacular language

Waited for a long time to listen to an audio version of Odyssey. I was not aware of the extreme differences in translation until I started listening to Lombardo's translation and his use of conversational English. I prefer the transalation of Robert Fagle. Fagle's translation seems have the atmosphere of the poems more as they would have been in Homer's era. It is all translation we listen to which brings great changes with it anyway. I am not a scholar but do believe it is important to preserve the "feel" which this one does not for me. It seems more like a comic book form. I will listen to it but am disappointed and wished I had done a bit more research before downloading this version.

The Best New Translation on the Market

Not only does this translation bring the text into the modern era, but it weaves the poetry into the story beautifully. The characters are so real and the story still so bold, that you will not want to stop listening. HIGHLY RECOMMEND.