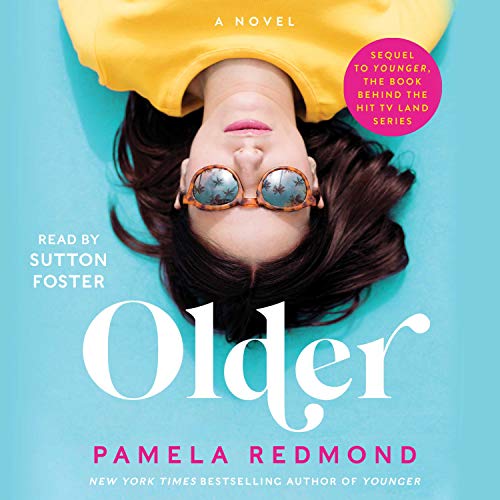 Written by: Pamela Redmond
Narrated by: Sutton Foster
Try for $0.00

In the hotly anticipated sequel to the beloved Younger - now a hit TV series from the creator of Sex and the City starring Sutton Foster and Hilary Duff - Liza Miller is torn between two cities and two hearts when her best-selling novel is picked up by a major television network.

Liza Miller never dreamed that anyone would be interested in her life, let alone buy a book about it. But everything changes when, on the eve of her 50th birthday, she publishes a thinly veiled novel about a woman posing as a millennial called Younger - which her old friend Kelsey wants to turn into a TV show.

Liza is off to Los Angeles to help Kelsey write the pilot. But that means leaving behind her on-again off-again boyfriend, Josh, her pregnant daughter, and her best friend, Maggie. Can Liza find happiness in her new adventure if it means leaving everyone she loves?

Yet as Liza is swept up in the heady world of Hollywood, she finds herself thinking less and less of her life back home in New York. And when she meets Hugo Fielding - the devastatingly handsome and incredibly flirtatious Brit playing her boss on the show - she toes the line between having a crush and falling in love.

Torn between New York and Los Angeles, a familiar love and a risky one, an established career and a shot at stardom, Liza must decide if it’s too late to go to the ball...and if she even wants to. From the author of the beloved Younger, this is an endearing, hilarious, and relatable tale of second chances and new beginnings that proves: the best thing about getting Older is that you finally get to be yourself.

What listeners say about Older

Loved the show and loved this book

It was really nice to have some finality to the characters but also leave it open for more installments down the road. Love Sutton as the narrator. ❤️❤️❤️

YOUNGER LOVERS WILL HATE THIS.

in the last 2 hours of this book I was rolling my eyes so much it hurt. I wanted to give it 2 starts but now I give it 1 star and sadly if I could i'd give it a zero. THIS IS THE WORST BOOK FOR A TRUE YOUNGER FAN. IF ANY OF THE TV SHOW PRODUCERS SEE THIS PLEASE DON'T DO THE SAME WITH THE TV SHOW. BE BETTER.
Pamela's writing is good as the first book, BUT THIS STORY RUINED ALMOST EVERY CHARACTER. for real now, I truly love Sutton Foster and I think it's so fun for an actor to see his name in a book- but this WAS NOT IT. this is the FIRST out of 30 books of my 2020 I give this low ranking.
If Pamela created Liza as Alice, she should have not written this book in such a different tone. I hated Liza and her choices in this book, at 50 years old she's being the worst CHILD. The last two hours were the worst, THE WORST. Liza fucking using Josh as a play toy and admitting it, making him leave his girl with manipulation because he's so madly in love with her, just to go sleep with this fake a## hollywood actor Hugo Filding. F him.
I did not enjoy Stella nor Hugo. Hugo in my opinion is better than Charles, but they both SUCK. The TRUE MAGIC of YOUNGER is that Josh make Liza see she's still magical and have a future no matter her age. THIS IS BULL.
I gave the first book 5 stars even tho the characters are different, but at least the first book got the job DONE. this book is a money grab and I think it might be the only book i'll return from Audible.
THE ENDING WAS HORRIBLE. where the f is JOSH? and okay, I get that in the show they made a pretty cute scene between Josh and Kelsey, but this brings me to the other worst thing about this book, I HATE KELSEY.
EXCUSE ME SISTER, isn't Kelsey the girl who had an affair with her autor Anton? or was this all a LIE? Then you go and judge Liza for the same stuff you've done? why bother create a piece of art if you trash your previous one in the making?
I HATED LIZE, KELSEY, and KAITLYN IS HONESTLY SUCH A BRAT. she was one in the first book too, but f this, she's even worse in this one, "I don't want to be a mommy, you take my kid MOM" common, this is the worst Younger book out of all of them (4 as far as now)
It's so sad and I truly hope JOSH will get justice, even if we get an annoying "My true love is maggie and my friends" kind of ending on the show (and that's bad too), I still need JOSH SOMEWHERE.
Why the hell is Liza shipping her past lover with her best friend? like I said, a CHILD.
I think mentioning Darren Star was a disgrace, because he saved Liza from this horrible ending Pamela gave.
And if Pamela sees this by chance, YOU ARE A GREAT WRITER, but do justice for your characters! this book is so unbelievably bad. so upsetting, I WAS HOPING FOR SO MUCH MORE FROM A BOOK CALLED "OLDER", she's a fn CHILD in this book. so annoying.
Maggie and the gender fluid partner are both great, nothing to get into there.
THE ONLY TWO CHARACTERS THAT HAD POTENTIAL WERE MRS WHITNEY AND JOSH.
Mrs Whitney was sweet and much more *Female Power* than the annoying and boring Charles. She was a close friend and I enjoyed her a lot.
Josh will always be my baby, he's the best character in this franchise, he never goes wrong, has a heart of gold, and Liza is giving zero Fs about him(Both in this book and the TV Show)
On TV, Liza is more calm but still LOVING, in season 6 finale she's holding on to their tattoo, she still has love for him in her heart. in this book she was like "Who the f is Josh and why should I care?"
WHO THE F IS HUGO FILDING AND WHY DO I CARE ABOUT HIS BORING FEATURES?
1/5 stars, 0/5 if I could. Do better Darren Star on the Show finale, PLEASE PLEASE PLEASE! This book ending was a warning sign, so bad. sadly.
I feel bad for writing such a bad review, but sometimes being honest is better. Do better on the TV show.
(I GAVE SUTTON 5/5 on NARRATORING this book, she's done an amazing job with boys/girls/them and was charming to listen to.) Sutton, Love you.

I loved the energy that Sutton brought to this character. It helped me to see it as related to the television series character. I liked that her character was still struggling to find her place on the world. I really didnt like the romantic storyline and how it that particular part ended. It seemed rushed and ingenuime. I hope the show does not follow suit.

Sutton was very disappointing and the story uncaptivating. Unless she was speaking as liza, her tone was bland. The plot does its best to link the original book with the changes in the show, but it is so far fetched and seems weekly put together that I was not interested at all and what happened to the characters. it's a shame, because the show is so great

This book (especially this audiobook read by the amazing Sutton Foster) really ties the books and TV show together, making it all seem as if it were in fact real. The story is fluffy and light, but at the same time truly powerful. I loved the characters, very diverse and fully fleshed out, and the empowering message that they all embodied. If someone makes fun of "chick lit" ever again in my presence, I will make them read these books and watch the show.

PS: I just wanted to rave some more about Sutton Foster's great performance. It really made the book come to life for me.

Wish to be more connected to first book

I can’t forgive the name changes of the book character. I love both the series and first book but this one is a weird mix of them and some warped third reality. Had higher hopes.

interesting link between book and show

this has me wondering if this will foreshadow season 7 of the series. I had been wondering how Liza could NOT wind up with Josh but I was happy with this

A tie up to Younger

This is recommended to anyone who loved the show Younger. The narration was so great with Sutton Foster. First of all it was her character and second well it just continued the story more so for me with her being apart of the narration. Stella was annoying, as I’m sure was the point. I could relate to starting later in life, working with younger people. Fortunately, I too looked younger then. I could relate to juggling kids and career. What’s more I could relate in wanting to getting in with what we want in life after reasoning kids, sending them off to make their own story.

A must if you are a fan of -Younger-

Even though I had both “Younger” and “Older” in my library, because I paused my membership I could not listen to younger ☹️. So I started from the end with Older.
If you are a fan of the TV show, you must listen/read this for two reasons:
1) closure: since their filming the last season
2) Liza is now turning 50 and other adventures are coming and it’s narrated by Sutton 🥰.
I can’t really say much about the book because it would involve way to many spoilers. But, the story shines light on how Younger became a TV Show. I don’t know if this is based on Panela’s life but I loved it and was sobbing at the end because I didn’t want it to end.
Great read, I enjoyed it soo much. And, I’m bummed that I didn’t start with Younger because like with all books that turn into TV shows or movies, there are characters missing or non existent, or added.
I can tell you this, Catlyn is still a brat 🤨

my favorite TV show is younger and this book is the best and I love the voice is Sutton Foster.

This is a fun book. I enjoyed hearing Sutton Foster read it. The characters were fun and it was nice to see everything unfold..