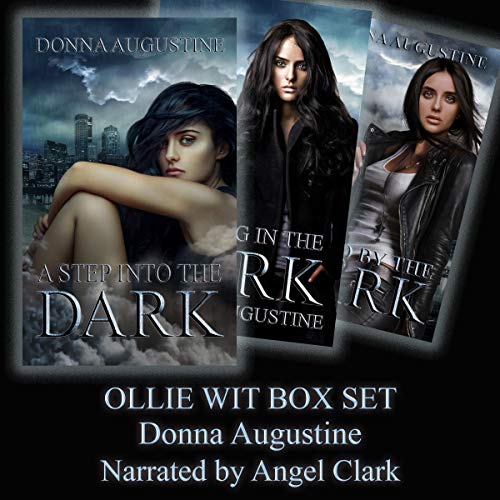 People tell you the monsters in the closet aren't real. They're wrong.

Get all three books in this urban fantasy romance.

A Step Into the Dark (Ollie Wit, Book One)

Ollie Wit is the strongest Shadow Walker born in decades, but it’s a gift with a steep price.

Walking in the Shadowlands can bring untold powers and spells, and even greater risks. Every step into that other world brings her closer to the monsters that have haunted her since a child, destroyed her family, and wreaked havoc all around her.

Kane knows Ollie is the key to getting the spell he needs and he’s the answer to ending her torment. But it’s a bargain that brings her closer to her own destruction. Even if she succeeds, will she be able to walk away from the newfound power that comes with walking in the Shadowlands?

Some people find power in the light. Others are meant to walk in the dark.

Ollie Wit left it all behind: a new home, friends who saw her as something more than a fragile shadow walker, and a budding relationship with Kane. She did it all in an effort to shield Asher, who should’ve never been able to escape the Shadowlands.

Now her money is gone, her hopes of saving other shadow walkers has slipped through her fingers, and Kane won’t speak to her. She’s been abducted by leprechauns, who think she has committed an unspeakable crime. The vampires want her dead, and there’s a crawler blowing up End of the Rainbows. Kane might not want to work with her, but he’s going to have to because all hell is breaking loose in Boston.

Life with Kane is wonderful, right up until it’s not. People like me, Shadow Walkers, who know that monsters are real and nightmares don’t only happen when you’re sleeping, are always waiting for the worst. But no one believes me when I tell them disaster is looming, not even Kane, the man who has seen more than I can imagine.

When the worst does happen, I’m not prepared. Months of my life are wiped from my memory, strangers call me friend, and it looks like I’m conspiring with the enemy. I need a backup plan. Only problem is, if I have one I don’t remember it. I don’t remember anything, like who to trust and who to hate. Someone screwed with my life, and they’re going to pay. But do I trust Kane to help me when all I can remember is that I hate him?

found the story enticing and unique. this was a great listen. the characters were lovable and relatable. the story was adult enough to enjoy and still not that explicit which is hard to find these days. deff worth the credit.

not a fan of the lady who did the voice, i pushed myself throw the first book but i couldn't do it for the rest of them. the voices she does for the males but just make me want to pull my ears off

This boxset, each book had the perfect balance of all elements. I say this with the exception of the final chapter of the last book that was pure sugar!
Is it worth listening to hell yeah! But prepare for a cavity.

Ollie Wit is a wonderful series. I have read reviews that didn’t like the narration but I think they gave up too soon. At the start of the book we see a women who has been through so much she is almost broken. The narrator is performing correctly as she is acting Ollie’s mental state. As the books progressed we get into the character development and we get to see Ollie overcome her problems and really come into her own. As Ollie changes so does the narration.

There is a wonderful cast of supporting characters that really enriched the story.
The only thing I wish for is a book 4 or Novela so that we can check back in with Ollie and the gang to see how they worked there happily Ever After.

I was put off at first by the performer. but I got it anyway. and it turned out to be a real good idea. I ended up loving it. performance improved greatly. or I just got used to it anywayi loved the fact that it didn't have sex ever 10 minutes. the storys were very well done. I only hated that it ended and it doesn't look like more will be coming. I got so hooked on it that I started up all night to listen to it. great work. plz write more.

The story line was ok, but the heroes were tedious and it was all very drawn out. Too much whining and stupid fighting.

It was really hard to get into because it was confusing at first, too many names to keep up with, but I’m made it. It was a really really good book, but then the author either must have ran out of ideas or got bored towards the end- it’s like “hey let’s wrap this up quickly while leaving a major question not really explained if explained at all. So I couldn’t give it 5 stars. Maybe a 4th book, but I don’t think so. The book had so much major movie potential in all kinds of ways, so I got left feeling disappointed.

loved this book. really wish it went on. i didnt want it to end. i love the fact it was a box set.

zero common sense! stubborn for no reason! acts like a child! absolutely nothing about her is the least bit likeable!
i made it to second book in hopes that she would show character growth but she got worse.... oh yeah and the narrator has a great reading voice all smokey and pleasant but then she does the characters and you want to pull your ears from your head!