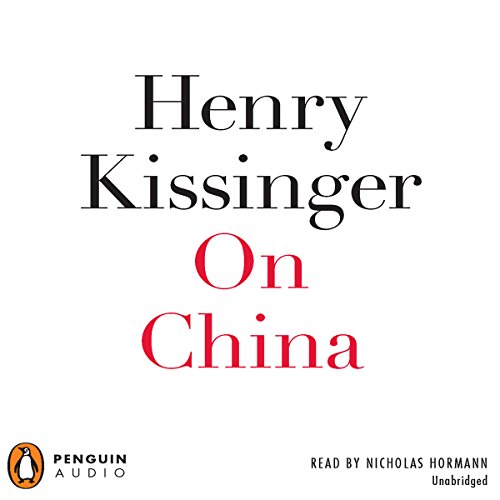 Written by: Henry Kissinger
Narrated by: Nicholas Hormann
Try for $0.00

The eminent historian and strategist reflects on how China's past illuminates its 21st-century trajectory, drawing on 40 years of intimate acquaintance with the country and its leaders.

In On China, Henry Kissinger turns for the first time at book length to the country he has known intimately for decades and whose modern relations with the West he helped shape. Drawing on historical records as well as on his conversations with Chinese leaders over the past 40 years, Kissinger examines how China has approached diplomacy, strategy, and negotiation throughout its history and reflects on the consequences for the 21st-century world.

As Kissinger underscores, the unique conditions under which China developed continue to shape its policies and attitudes toward the outside world. For centuries, China rarely encountered other societies of comparable size and sophistication. China was the "Middle Kingdom", treating the peoples on its periphery as vassal states. At the same time, Chinese statesmen - facing threats of invasion from without and the contests of competing factions within - developed a canon of strategic thought that prized the virtues of subtlety, patience, and indirection over feats of martial prowess.

On China examines key episodes in Chinese foreign policy, from the earliest days through the 20th century, with a particular emphasis on the modern era. Kissinger illuminates the inner workings of Chinese diplomacy during such events as the initial encounters between China and modern European powers, the formation and breakdown of the Sino-Soviet alliance, the Korean War, the opening of relations with the United States, the Tiananmen Square crackdown, and China's accession to the World Trade Organization.

With a final chapter on China's 21st-century world role, On China provides a sweeping historical perspective on Chinese foreign policy from one of the premier statesmen of the 20th century.

"Fascinating, shrewd.... [The book’s] portrait of China is informed by Mr. Kissinger’s intimate firsthand knowledge of several generations of Chinese leaders. The book deftly traces the rhythms and patterns in Chinese history...even as it explicates the philosophical differences that separate it from the United States." (Michiko Kakutani, The New York Times)

"Nobody living can claim greater credit than Mr. Kissinger for America's 1971 opening to Beijing, after more than two decades of estrangement, and for China's subsequent opening to the world. So it's fitting that Mr. Kissinger has now written On China, a fluent, fascinating...book that is part history, part memoir and above all an examination of the premises, methods and aims of Chinese foreign policy." (The Wall Street Journal)

"Fascinating.... In On China, statesman Henry Kissinger draws on historical records and 40 years of direct interaction with four generations of Chinese leaders to analyze the link between China’s ancient past and its present day trajectory. In doing so, the man who helped shape modern East-West relations presents an often unsettling, occasionally hopeful and always compelling accounting of what we’re up against." (The Chicago Sun-Times)

What listeners say about On China

I have been doing business in China for a number of years. I continue to read and learn what I can in a futile attempt to understand the Chinese and their business practices. Each book I read makes me feel a little smarter and better armed but none have ever given me an “AH HAA” moment, that is until I read “Henry Kissinger on China.” This book is an autobiography of Dr. Kissinger’s work over the years in China. He starts with a history lesson that is complete and comprehensive. Importantly, this history lesson helps to set the stage for a much more complete understanding of the Chinese values and mindset that so often loses me. After Dr. Kissinger sets the stage he has left the reader with a complete understanding of Chinese singularity, and the historical path to modern China.

The reader is then treated to a rare insider’s look at the how the Chinese and the American’s approached each other, worked through many difficulties and misunderstandings to become economic bedmates. Dr. Kissinger’s insight helps to outline the how and why of Chinese policy. The reader can formulate an understanding of the Chinese approach through this lens provided in the book. For me, historically significant events are now understandable. I would never say that I could understand Chinese politics, or would never presume to attempt to predict Chinese political response to an event, I will say that I can now understand the Chinese point of view and I can now formulate better analysis of tact I wish to take in business and I am better equipped to understand Chinese reactions to those events.

The book is logically broken down, chronologically, into neat blocks that stack on one another. Dr. Kissinger closes the book with two thought provoking chapters, “The New Millennium” and “Does History Repeat Itself?” In these two chapters Dr. Kissinger lays out a myriad of possible events and typifies American responses. Then we are asked if we learned anything from the book. I found the book to be extremely interesting and highly educational. I thank my friend for giving this to me as a gift.

Put this book on double speed playback. It's long. It's very dry and somewhat repetitive at points. It's clearly the bias opinion of one person who has been criticized for his role in world affairs. Nonetheless, the historical perspective on China and the specific insights into the Chinese/American dynamic should not be foregone by anyone interested in political policy or business relationships with China. I came away with a more empathetic understanding of China than I had before, and while I do not think I am qualified to set American policy on China just from reading one book, I no longer view the issue of Taiwan or the Communist party in the same way. America must learn to engage China in a positive way, and informed American voters should read this book.

The best book on understanding China

The way the book was laid out to explin the world as the Chinese see it from a historical and a modern view point goes a long way to understand the Korean war and other flash points. It also explain how they will tend to react in the future.

If you are going to do business in China read this book first.

Great book, great read for understanding the history and culture of the Chinese people written in a way that Westerners can understand.

Another History of China

I wrote my MA thesis on China's politics, economics, and history, so I was expecting more of an in depth look at the US China relationship with this book. I was quite surprised and disappointed with this offering. Unfortunately Jonathan Spence's Making of Modern China covers the historical aspects of China exponentially better than Kissinger.
Where I looked for this book to excel and really pay for itself was in the political mindset of China from the opening of Sino-U.S. relations on. This did not begin to take form until the later half of the book and I could have read the NYTs to get the perspective Mr. Kissinger provides. There are a lot of histories on China that are better than this book and Kissinger just does not provide enough meat for me to recommend this volume.

Seems like he (Kissinger) spent a little too much time in China. Was hoping for a little more subjectivity around the fall to communism. Kissinger seems to be at a minimum neutral to communism.

This book tops all other books that I have ever read about China, whether it was a non-fiction or a fiction, whether it was written by Chinese, American, or Chinese-American. My view on this, though not authoritative, has some validities. For after all, I have lived 45% of my life in China and the other 55% here in the West.

The book provided no earth-shaking views of any kind, rather it showed Kissinger’s deep understanding of China. What is an understanding? It is knowing, the knowledge of something that transcends the barriers of language. Kissinger articulated complex, subtle and delicate topics at such an ease, that one was made to feel as if s/he was visiting an old friend. Every word was something one already knew, but only now being spoken out aloud. It was ingenious.

Would you listen to On China again? Why?

Provides a truly broad scope of China and how it perceives itself and it's place in the world. (And why ! )

I will listen to the book again because all of it is worthy of total understanding.

The broad scope and the first person detail that is not apparent to the media "entertainers".

How diplomacy is really conducted out of the public view and how it can be made to work for the mutual benefit of the various parties at different times, place and geopolitical balancing.

An excellent presentation of China / US / and world geopolitics.

Great insight into the Chinese people and their history. I very much enjoyed the ancient history, then medieval history and then the modern history. It was a good chance to see the Chinese point of view in WWII, Korea, Vietnam and now the present times. The last chapter is an excellent look into potential futures.