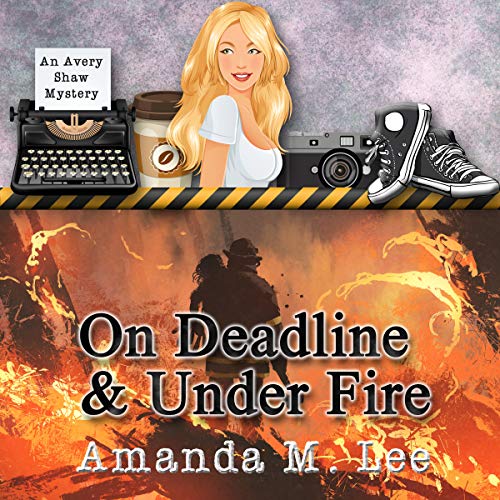 On Deadline & Under Fire

There’s nothing Avery Shaw loves more than a challenge....at least when it comes to tracking down a story. The challenge she’s facing this time is the one thing she might not be able to overcome, though. Vacation. That’s right, not only is Southeastern Michigan’s busiest reporter off work for a week....but she’s also on the receiving end of a visit from her boyfriend’s mother. Eliot Kane is tough as nails but he’s obviously nervous about the two most important women in his life crossing paths.

The fact that he’s nervous makes Avery agitated....and she worries about very little other than who she can upset and how quickly she can make her enemies cry. As luck would have it, Avery stumbles on a story when she should be enjoying her time off. A high-rise apartment fire leaves one dead....and ties to organized crime are abundant. The only thing Avery knows about the mob is what television and movies have taught her. That doesn’t mean she’s not keen to learn.

Avery is in a pickle. She has to uncover the motives behind a murder, get her boyfriend’s mother to like her without losing herself, and keep her family out of trouble even though they’re sniffing around and causing mischief. Oh, and she has to pull it all off without melting down or letting Eliot know what she’s up to. Things are about to get wacky and dangerous in Avery’s world. She wouldn’t have it any other way....even if it ultimately kills her.

What listeners say about On Deadline & Under Fire

the book and story were good the narration was so terrible it was very hard to get to the book she should keep to One Voice not multiple voices.

Amanda M. Lee has a way with making me laugh and cry through them. Avery, Elliot and Jake are great. I love Elliot's nickname for Avery because she finds trouble around every corner. I love to read books that get my emotions involved. I can't wait to read more of the books.

This particular character was so annoying that I couldn't stand listening. it wasn't the narrators fault..the character is just an awful person.

Things maybe new for Avery now stil a lot of madcap when she is around. The story she is to be doing and the one she wants to do. Her boyfriend just shakes his head. Good story and narration. Given audio for my voluntary review

Avery is maturing into an (almost) adult, good thing too with Elliot's mom visiting. these books only get better and better!

Loved the latest installment in the series. Amanda Lee does a great job developing the characters, and Angel Clark is a fantastic narrator. Highly recommend!