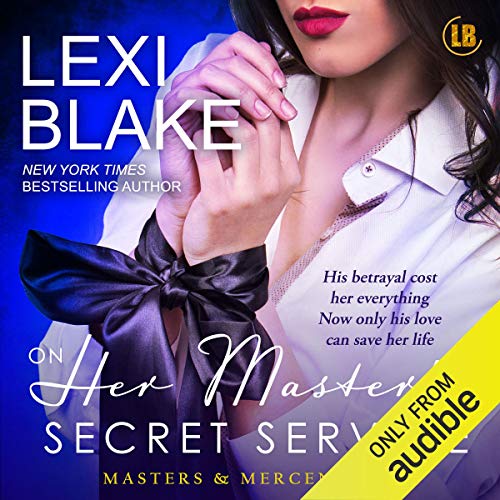 On Her Master's Secret Service

Written by: Lexi Blake
Narrated by: Ryan West
Try for $0.00

Her submission fulfilled her.

When Eve St. James married Alex McKay, she had her whole life ahead of her. They were the FBI's golden couple by day, but by night, Eve gave herself over to her husband's world of dominance and submission filled with pleasures she came to crave.

His betrayal destroyed her.

Worried for her safety, Alex left Eve behind to tackle a dangerous mission. But Alex never suspected that Eve was the real target, and her security is destroyed by a madman. By the time he rescues her, his wife has been changed forever.

But when her life is in danger, he is her only hope.

Unable to heal the damage, Alex and Eve are still trapped together in a cycle of pleasure and misery that even their divorce cannot sever. But when a threat from Eve's past resurfaces, Alex will stop at nothing to save her life and reclaim her heart.

What listeners say about On Her Master's Secret Service

the story was great and the narration was exceptional, but it seems like this book seriously lacked in editing. phrases repeating, trains of thought really drawn out... I love this series, but I feel like now that I'm hooked the publisher no longer needs to try so hard.

Loved the narration as much as the book. Except for Eve's voice. It felt a bit too masculine for me. But only a slight distraction.

I listened to the audiobook. This was intense as we learn about exactly what Evans did to Eve. I don't think of this book as being a standalone because it involves the entire Taggert-McCay team, and makes references to things that occurred in previous books. I think you really have to start at book one and work your way through.

At the same time I had a problem with this book, I enjoyed the fact that it was full of suspense. It just seemed to go on forever. Very early on, it was easy to figure out who Christie/Charlie was in relation to the group. There was one thing that turned out to be a surprise to me. Most of the tension had to do with hoping Evan's did not get his hands on Eve again.

Alex and Eve have been doing this back and forth through the series. I know it was their book, but way too much time was spent on them needing to reconnect. I also felt like Alex didn't listen to her any better the second time around.

The narration was ok. There were a couple of times that I wasn't sure which guy was talking. The narrator seemed to have an easier time in the last book, and he was switching between 3 accents.

The last book introduced Simon. This book introduced Charlie and Jesse. There is someone named Penny lurking in the background at the office. Hopefully Ian's book is next. I honestly think of I could have skimmed some of the back and forth between Alex and Eve, and, some of the situations that were very obvious this book would have been much better.

It was still a pretty good listen with action, suspense, romance, and mystery. I admit that I did like Alex better in his Dom persona then when he was running around behind Eve being pitiful. The secondary characters were pretty interesting too. I still have to listen to Ian's story, even if I'm pretty sure it will also be way too long.

Lexi spins a tale of love and suspense

Alex and Eve (when they're on a mission) come together in a bedroom to say goodbye. Tragic heart ache to let go of their past and say hello to their future. Wow what a scene Lexi writes. It took alot of kleenex to get through that chapter.

good story, good addition to the series. interesting listen, more of a spy book than previous in series. narration was good

Love this author and narrator!

Lexi Blake delivers again with a suspenseful and sexy story on the continuation of her series and Ryan West does a masterful ( see what I did there 😉) job bringing it to life.

WHEN IS NEXT ONE COMING OUT!

love this series. can not wait for the next one to come to audio. please hurry up.

Lexi Blake, thank you, this one a favorite, narration superb, loved Eve, strength, vulnerability and love, so much power in that, and Alex's changes and understanding, great story. Can't wait for Ian's story.

I love it!!! As I’ve said before I’m loving this series and this book did not disappoint. From loving and finally answered questions regarding the future of Alex and Eve, to the expected, and unexpected “villains.” its all incredible. I’m totally binge listening on this one!