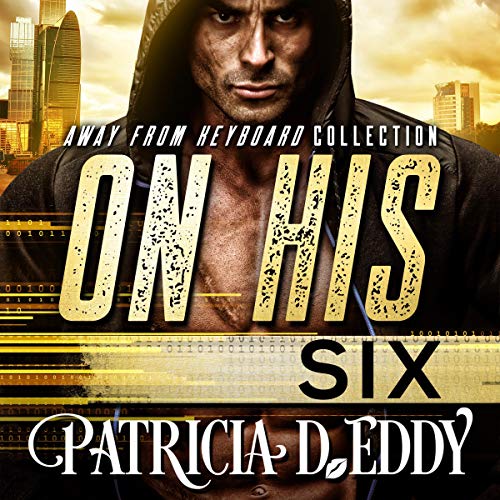 Can broken be beautiful?

Ryker McCabe. Former Special Forces. Survived 15 months in an Afghan prison, tortured within an inch of his life. His scars - and his fears - keep him alone. Disconnected from the world. From his team. From any hope of redemption.

Until he meets her.

Wren Kane. Hacker extraordinaire. Desperately searching for her brother. When police find his body in a drug den, she knows there's more to his death than an overdose. He'd promised he was clean. And then, she finds the message he left her.

Wren's prepared to go it alone. Until she runs right into Ryker. He's the biggest, baddest man she's ever seen. And he's willing to risk his life to fulfill her brother's dying wish. But how can she trust him when he won't let her in?

When danger comes for Wren, Ryker jumps into action. No one hurts his little bird. Except maybe him. Because if he can't share his heart, he could lose her forever.

On His Six is a standalone, slow burn, dark military romance with several potential triggering scenes, including drug use and the brief threat of sexual violence.

All of the books in the Away From Keyboard series are standalone romances featuring a different couple, but past couples and characters do occasionally play active roles in future books.

What listeners say about On His Six

This book is definitely worth the credit, it has action, mystery, suspense and retribution. Aiden Snow is so Amazing as the narrator. I’ve read the next book in the series as it’s Dax’S book and this series does not disappoint. However when they relive their time in captivity, that part is not for the faint of heart.

Aiden Snow playing Ryker, all alpha, masculine and dangerous was right on target for me. That deep voice gives me goosebumps....and I love it!
I also love it when the author recognizes when they have the right narrators for a series.
This is another Special Ops book with intrigue, mystery, topped off with some romance.
Ryker was definitely a badass dude with demons and the story tells us why. He dealt with some serious stuff.
I do love listening to Patricia Eddy's books especially when Aiden is narrating.
Ryker, dealing with his fears and scars and finally finding that balance he needed and his little bird made for a decent story.
Ryker was in the previous book "In Her Sights" (Aiden was excellent in that one too) but this one is all about Ryker!! Explains his attitudes from the other book. I can't use words like angst or epic because that's not the case here but I did enjoy it and I'm just a big Aiden Snow fan so I am a little biased too.

I truly love this book. it was exciting, interesting, heart breaking. This is only the second review I've written in over 400 audio books. I love all the characters and the little dog too. In my opinion this book is so worth the credit for your HEA.

Ryker is sexy as hell! I love the protectiveness in him. Definitely an alpha in my book

Wren is irritating to no end… 🤬

This book had so much potential, I’m a sucker for tough military/ex-military… they just come off so tough on the outside and sweet on the inside… Aiden Snow is an amazing narrator to portray Ryker buuuuut…

Wren was so much to take. For someone “smart” the constant stupid actions are beyond me… I’m just over alpha men falling for dumb chicks… it’s aggravating to listen… normal, realistic women behavior not selling? You’d think with anxiety issues she’d be more careful, NOPE!!! He’s helping HER! But all she’s doing is complaining and not following direction in enemy country… it doesn’t take a genius to know this but there she was (supposedly a smart woman) needing a rescue because she didn’t listen…I don’t even understand her train of thought…maybe if she was, 15? I found myself getting aggravated… I was looking for romance and a story not irritation… the story had so much promise with Ryker and his war buddies. I honestly wouldn’t have minded more of his blind friend…or literally any side character… I just don’t want to know about Wren or her inner thoughts… she doesn’t make sense at all and narration didn’t help matters much either……beginning chapter 23 and I tapped out…Ryker has to figure out a rescue over her dumb action… I could see if someone plucked her from the safe house or even the cafe… I have gotten to a point where I can’t with women running towards danger then crying for the hero when the said hero specifically told them not to in the first place 😫 are they toddlers? 😫😫 I don’t see how she could redeem herself… I wish Ryker just left, she’s not worth it. Ugh she’s so freakishly annoying…

As much as I wanted to know Ryker in this book, his story had so much promise, Wren’s dumb story killed it for me, it was too much and with that… it’s a no from me and had to return…

Fell in love the first time the first sentence was read. I would recommend it.

I didn't think I could love Ryker's story more...

On His Six was the first book I ever read from Patricia D Eddy, and it has always remained my favorite. I immediately fell in love with the way she brought these fractured and healing characters to life with her words. Despite having read this one at least half a dozen times... I so thoroughly enjoyed hearing how Aiden Snow and Grace Grant brought their voices and vitality to the surface. I got utterly lost in hearing Ry struggle with his connections to their people - his family - around him, and Wren as she found the strength to heal and overcome the demons brought on her. This is absolutely a book I'll listen to time and time again.

A fantastic action packed romance. Loved the relationship of Wren and Ryker especially as Ryker starts opening up.

this is the 3rd in the series and it was definitely more intense than the previous 2. if you have any triggers to forced drug use, attempted rape, avoid this book.
with that being said, I liked this book because it was so intense and not my usual happy rom com. I'm the type of person who needs to finish a series once I start and I am curious to hear the rest of the storylines. the narrators are usually ones I enjoy listening to but I feel like I would've rather have read this book instead of listening, buy I think that had more to do with the subject matter than their ability. Patricia is a talented author and hasn't pegged herself into one niche and I love that. I've read other books of hers and haven't found one yet I I didn't enjoy!

On His Six - exciting and captivating

I flove this series. The audio enhances the experience in all the best ways—such excellent writing with rich, complex characters. I need more!!