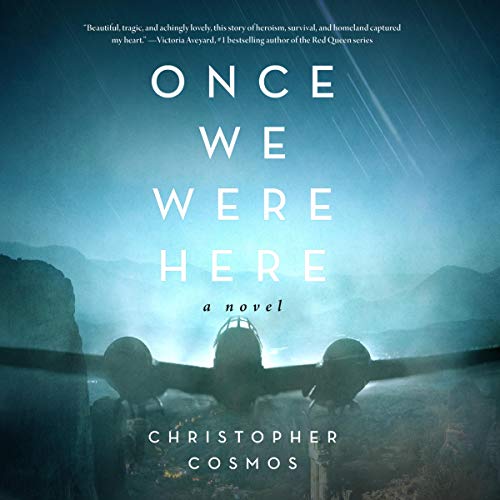 Once We Were Here

Written by: Christopher Cosmos
Narrated by: Gary Bennett
Try for $0.00

On October 28, 1940, Mussolini provides Greek Prime Minister Ioannis Metaxas with an ultimatum - either allow Axis forces to occupy their country or face war - and Greece’s response is swift: “Oxi!” they say. “No!”

In a small village nestled against the radiant waters of the Aegean Sea, Alexei, the son of a local fisherman, and his best friend Costa - who were both born on the same night 18 years earlier and have been like brothers ever since - leave their homes, like all the other young men in their village and throughout Greece, to bravely fight for their country.

But before they go, Alexei asks Philia, the girl he’s loved his entire life, to marry him, which sets into motion events that will change the lives of these three and their family and friends forever, beginning an unforgettable story of courage, survival, sacrifice, and the strength of the human spirit.

A spellbinding novel and sweeping epic, Once We Were Here introduces listeners not only to the heart-pounding dangers and horrors of war but also to the heart-breaking emotions and sacrifices of those who fight and whose lives war intrudes upon.

What listeners say about Once We Were Here

Story line was great. Kept wanting to hear more. Not wanting to set it down.
Narration was superb.

Can’t wait for the movie or tv series!

Awesome book. In addition to the amazing story, I learned a lot about Greek culture and the role that the Greeks played in the war. This is going to be a huge hit when it gets made into a movie or tv series

I have rarely enjoyed a book as much as this one. I generally do not like war and fighting maneuvers and I usually skip over battle scenes but I couldn’t do it. I was mesmerized and imagining all the action in my minds eye. No book has ever made me do that. I kept thinking about how it all played out. For good or evil. The character development was excellent What a love story. What a tragedy . I took the major players to heart and cried and cried in different scenes . Not familiar with Greece during the war but Greece played a very important part in the Allies winning .even hitler had to complement the fighting spirit of the Greeks . No wonder this country has lasted down thru the ages The narrator was one of the best I have ever hear. So glad I didn’t pass over this audio. I will give the author and narrator a ten star rating !!!!

Where has this book been??

This is one of the best stories of Greek resistance that I have read. We hear so much about the French and English resistance and fortitude but very little about the Greek.
The narrator was excellent, the story line was very interesting and held my attention throughout the whole story.
I just happened upon this book and wondered where is the world it has been and why haven’t I heard about it before.
I hope more people will read it and boost its ratings to the top because it was excellent, and I don’t say that about many books!!

A facet of WW2 that we haven't heard enough about

This is a historical fiction based on the Greek resistance of WW2. The heritage, the friendships, the culture, the sea, the mountains, the Italians and ultimately the Germans weave their way into the lives of heroic young men and their families as they defend their homeland from invasion and ultimately change the course of history. Thoughtfully and beautifully crafted.