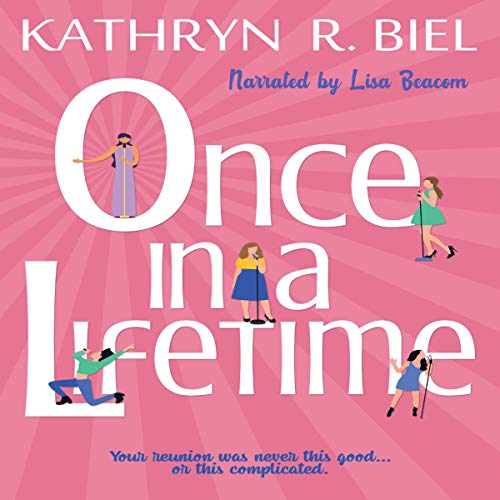 Once in a Lifetime

Ten years ago, the Sassy Cats were at the top of the charts until Callie Smalls walked away to pursue her career in fashion and television. The other four members - Angie, Tabitha, Mandy, and Daphne - were left to fend for themselves and continue on with their lives.

That is, until the day when Callie decides to book a gig for the group at a major music festival, without talking to her former band mates. Scattered across the country, at different points in life, can they rekindle the magic in the music?

A soccer mom whose husband doesn't know about her past. A fading star, sacrificing all to stay in the spotlight just one second more. A party girl, challenged with her most important role yet. A tiger mom, fighting for her son. A desperate woman, unhappy and alone.

A lot can change in the course of a decade. Will it be harmony or hatred for the Sassy Cats?

What listeners say about Once in a Lifetime

This was a great story with a great narration. The narrator had different inflections for the voice of each character so that, when all five women are together, you can tell which one is speaking. For Callie, it was a snobby/bitchy voice. For Tabitha, valley girl. For Daphne, precise and calculating. For Angie, underconfidence. Mandy was just the voice of the narrator herself, so I assume this is the character she most identified with.

Once in a Lifetime
: Kathryn R. Biel

The Sassy Cats split ten years back, when they were at the top. Each of the five girls went on to live their own lives. Now a one time reunion concert is sprung on them. Each woman has history, current situations, and it's questionable if the reunion will happen. This was a great listen. I couldn't stop listening.

The narration was well done. The characters were well portrayed. : Lisa Beacom gave each character their own voice and emotions. It was very easy listening!

This book is good!

I liked this book well enough. It is very well written. The only thing I didn't like was that Callie booked them to perform at a music festival without telling the girls she did until after all the paperwork was signed and it was a done deal so no one could back out. That's just wrong. She committed them without knowledge of what was going on in their lives & expected them to drop everything. The story picks up after the deal has been made and shows where their lives are now and how the comeback show has an effect on each one of them. Lisa Beacom does a wonderful job narrating this book. This book was a pleasure to listen to and I would like to thank the author, narrator, or publisher for providing me this audiobook at no cost in exchange for my unbiased review.

First off the narrator did a great job. She brought the characters to life.
I can’t believe I had never read a book by Kathryn R. Biel. She did an incredible job writing this with all the characters telling their own stories. The details were perfect and the characters so real.
This is a beautiful story of old friendships coming back together. As each person is confronted with their past history in the group with their friends they are forced to see their past as well as their future.

I enjoyed this book immensely, it is well written with interesting storylines that grabbed my attention right from the start and held it straight to the end. The Sassy Cats was an all girl band who broke up 10 years ago, each member went their own separate way. When one member, Callie, takes it upon herself to book the band for a reunion for a big music show. She needs to get everyone on board quickly, which is easier said than done, it has been ten years and they all fell out of touch. Some of the members are resistant they do no want to revisit that time of their life. But Callie manages to get them all to agree. I liked how we get each band members point of view, we see where life lead them and what their current situation is as well as views into their past. Callie Smalls is a reality TV show host for “Made for Me” her goes is to become a fashion designer. She is bossy and thinks she runs the show but no worries others put her in her place. Angie is also in the business, she is a dancer in a reality show with her partner Sergei, which is added drama to her situation. Tabitha is more of a glam society girl, she is the mom of a new born so her life is forever changing. Dauen-phen aka Daphne is married, she and her husband Jerry have a son with Autism, they are a great team and doing the best for their son. Mandy is married with three kids, a daughter and twin sons, her husband Myles is a jerk and flies off the handle when he learns she hid her past rom him, never telling him about her time in the band. There is a lot of history between Mandy and Dauen so their situation is even more complex. There are some great secondary characters in the book as well. I liked how everything plays out in this book, the story is uniquely told and plotted, all the pieces fall together leading up to what may be a phenomenal reunion wonder or a phenomenal disaster. I know I am late to the party and that this book is several years old but I hope the author is not finished with these characters yet, would love to hear more about them, especially Mandy. Kathryn R. Biel, thank you for this great novel.

🎧📚🎧And for the fabulous narration, Lisa Beacom is a talented narrator and a versatile voice artist. She brings these characters to life, humanizes them, giving each their own distinct voice making it easy to follow along and tell who is who. Her portrayal of the characters is spot on, she takes each role and makes it her own. grasping their persona as well as all their emotions which is reflected in her performance. She is an entertaining storyteller and a pleasure to listen to. Thank you for this fabulous listen🎧

This book is written in first person with 5 main characters! Kathryn Biel really showed her writing skills by pulling off such a well done story told from 5 different points of view. I was very impressed.

I was equally impressed by the performance of Lisa Beacom who was able to be move between the five voices and do so flawlessly.

Biel really brings in such heartfelt emotion and built so much angst. I was pulled into the stories (lives) of each of the 5 band members and felt connected to their stories - and invested in their outcomes.

This book is so well written. The characters and their varied personalities and flaws truly brought it to life for me. And I loved that it’s premise was different from any other books I have read.

I was amazed by the on point narration and how the narrator captured each character’s personality and voice... it made a good book even more enjoyable!

This book truly held my interest and even at its end made me want MORE!

A reunion above all reunions

Once in a Lifetime is a wonderfully written book by author Kathryn R. Biel that with the superb narration of Lisa Beacom takes this story to new heights. The story is a clusterfuck of secrets, jealously and a few self righteous characters that all pull something from one another to make things work out. I loved how the character's of Tabitha and Amanda found the strength within themselves the growth was phenomenal. I highly recommend this book to anyone over 18. This is truly a do not miss book. I received this book at my request and I am voluntarily leaving my honest review of my own volition.

This is a fun story and Biel did a great job story telling. Well narrated and entertaining. I laughed and even cried. Check it out.