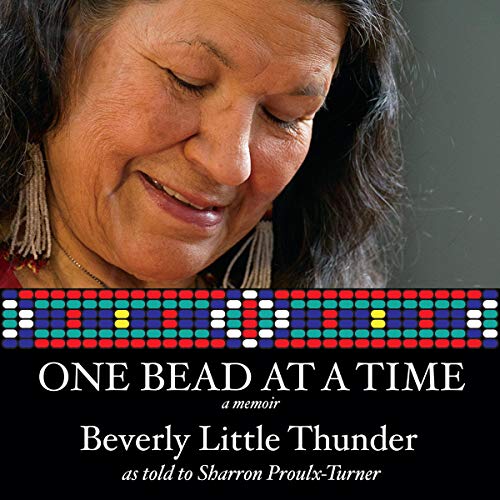 One Bead at a Time

One Bead at a Time is the oral memoir of Beverly Little Thunder, a two-spirit Lakota Elder from Standing Rock, who has lived most of her life in service to Indigenous and non-Indigenous women in vast areas of both the United States and Canada. Transcribed and edited by two-spirit Métis writer Sharron Proulx-Turner, Little Thunder’s narrative is told verbatim, her melodious voice and keen sense of humor prominent throughout her words. Early in her story, Little Thunder recounts a dream from her early adulthood: “I stared at these lily pads for the longest time and I decided that there was one part of the pond that had lots of lily pads and no frogs. I said, ‘I want to go there because there’s lots of lily pads but no frogs and I like creating community.’” And create community she does. Little Thunder established the first and today the only all-women’s Sundance in the world, securing a land base in the Green Mountains of Vermont for future generations of Indigenous women’s ceremony. She was active in the AIM movement, and she continues to practice and promote political and spiritual awareness for Indigenous women around the world. A truly remarkable visionary.

“The capacity to transform tragedy into possibility, sadness into joy, and social exclusion into an invitation for belonging is perhaps the most powerful tool humanity has at its disposal during these critical times. Let this groundbreaking contribution inspire all of us to work together to reconstitute the circle of life.” (Sayra Pinto, author of Vatolandia and Pinol: Poems)

“In a time of truth and reconciliation, One Bead at a Time: A Memoir by Beverly Little Thunder, is a book that should be read.” (Prairie Fire Magazine)

What listeners say about One Bead at a Time