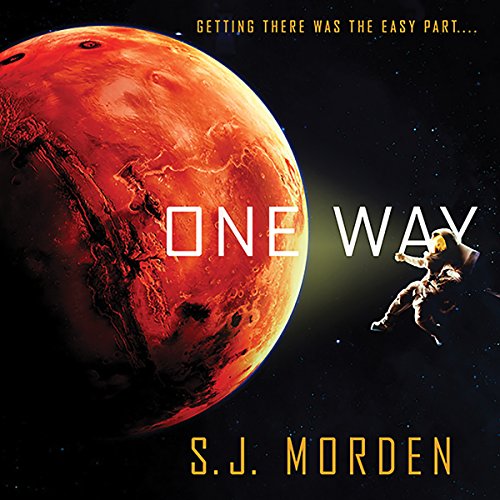 When the small crew of ex-cons working on Mars start getting murdered, everyone is a suspect in this terrifying science fiction thriller from bona-fide rocket scientist and award-winning author S. J. Morden.

It's the dawn of a new era - and we're ready to colonize Mars. But the company that's been contracted to construct a new Mars base has made promises they can't fulfill and is desperate enough to cut corners. The first thing to go is the automation...the next thing they'll have to deal with is the eight astronauts they'll send to Mars, when there aren't supposed to be any at all.

Frank - father, architect, murderer - is recruited for the mission to Mars with the promise of a better life, along with seven of his most notorious fellow inmates. But as his crew sets to work on the red wasteland of Mars, the accidents mount up, and Frank begins to suspect they might not be accidents at all. As the list of suspect grows shorter, it's up to Frank to uncover the terrible truth before it's too late.

Dr. S. J. Morden trained as a rocket scientist before becoming the author of razor-sharp, award-winning science fiction. Perfect for fans of Andy Weir's The Martian and Richard Morgan, One Way takes off like a rocket, pulling us along on a terrifying, epic ride with only one way out.

What listeners say about One Way

A New Twist on a Space Murder Mystery

One Way has been on my radar for some time – I ended up picking this book up to read (non-requested review) which I have very little time for anymore. My wife and I started another book on a drive home from DC and we just couldn’t get into it. We put One Way on and were instantly hooked. Literally the first 3 minutes were more intriguing than the hour we had given another book.

Morden knows how to build both suspense and intrigue as he builds the world, the characters, and the mistrust throughout. You follow one main character but are introduced to numerous others. Frank is one of those characters that in the beginning you don’t know if he is going to be a good or a bad guy – and you’re told right away that he’s a convict. You’re also told pretty early on why he’s a convict. While I’m not a parent – I could completely understand the crime that Frank committed.

Once the Earth part of the story was over – this entire book read like the synopsis said. It combines And Then There Was One and The Martian. And it references and I think pays a little homage to The Martian a couple times (there was at least one scene where duct tape was mentioned. I thought for sure one of them was going to mention Mark but they didn’t. I kept thinking to myself that this could have honestly been the prequel to The Martian. It was built in such a way that the convicts sounded like they were building the HAB that the characters in The Martian were going to live and work in. While I understand that the science and technology needed to power a Martian base would be the same – it felt so similar.

So, that bodes well for fans of The Martian. And if you like a good “whodunit” murder-mystery an are looking for something set in a new and unique environment you should check out One Way.

Overall, I thought that One Way was a well thought out and paced combination of a science fiction and murder mystery book. It has elements that a lot of people would enjoy and will have me thinking about it when it comes time to vote for my best books of 2018.

I have to admit, I suspected the final twist to this book for a long time, but somehow it still kept me guessing, or at least feeling like I didn't have all the cards I needed to play... the author weaves a truly spectacular and edge-of-your-seat murder mystery that is only improved by the fact it's set on Mars, and the audiobook performance really makes it pop
I highly recommend this to all sci-fi and thriller lovers!

The story starts with the overused "Deadly Dozen" theme: an end-game convict is given a chance at freedom on the condition that he participates in some sort of perilous mission. I knew this was the setup from the plot description, but some of the glowing reviews led me to believe (yes, I was led, I let it happen, my fault, blah blah blah) that S.J. Morden had done a decent job with the old cliche.

He didn't. The beginning is a very tired rehash of the "born to be bad" enlistment process.

In addition, the narration was terrible - dull, slow and monotonous, with poorly acted characterizations.

A big thumbs down on One Way.

Good plot, great narration. I sat in my driveway for 15 minutes listening, because I didn't want to stop!

overall this was a great book. the storyline was unique and plausible, and I really like the fact that there was so much scientifically correct information in it. however, the ending was rather abrupt and unsatisfying. I also think there was much more opportunity to embellish the reasoning behind the decisions the company XO made.

One Way is a wild ride and a fun one.

One Way was a fantastic book. Wonderful premise, a Complicated main character, so much action, and enough gray morality to staff a campaign for president. The main character Frank states several times, "Mars wants to kill you." But what is it is not only Mars trying to kill you? Where one mistake can cause your blood to boil off into the thin atmosphere. William Hope handles the narration perfectly. The voices are all wonderful. My favorite secondary character was Zeus. One Way is a wild ride and a fun one.