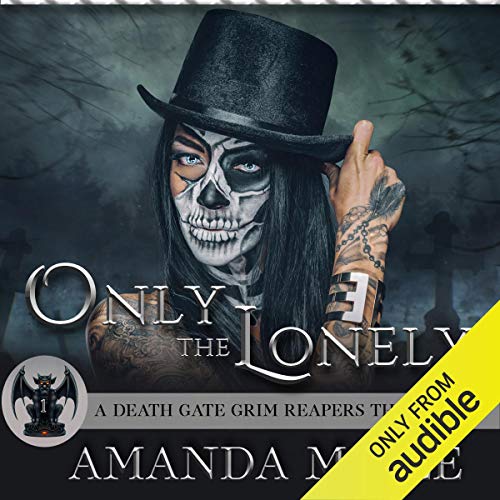 Isabella “Izzy” Sage spent her formative years on Belle Isle in Detroit, playing next to the gate that separates the living from the dead as her parents drew a paycheck from the grim reaper council.

Then the impossible happened, tragedy struck, and Izzy found herself an orphan. Her grandfather took her away and raised her among the Bruja in New Orleans, although her heart always longed to return to the gate...which felt so much like a part of her.

Now, as an adult, Izzy has worked her way up to gatekeeper status, and she’s back in the place her childhood ended. She’s the one in charge now...although things don’t go how she hoped. On her very first day, the gate is breached, and the wraith that crosses over is not only murderous but enhanced.

Izzy wants to be in charge, but the local reaper council needs help, so they send backup in the form of a magical reaping family.

The Grimlocks are loud, boisterous, and used to a good fight. The men are also handsome, something Izzy doesn’t want to acknowledge, even when the flirting gets out of control. In addition to all that, they’re also protective, and whether Izzy wants it or not, they’re going to infringe on her territory if they think they can keep her safe.

The past might be haunting Izzy, but she can’t look forward to the future until the danger is behind her. Those around her know more than they’re letting on, and the magic she’s been trying to hide is about to take over.

The fight is on...and Izzy is loaded for bear.

What listeners say about Only the Lonely


I was drawn to this book by the cover art. I love it. For the most part I enjoyed the story of Izzy the Reaper/Bruja. She returns to her home town to get answers about her past. The story starts with the important details and doesnt seem to have many flashbacks (which I hate). The author doesnt really explain what Reapers and Gate Keepers are in the story? What is the purpose of a Gate keeper if the souls cant get out? The Reapers collect souls so what is the need to have separate gate keepers? After reading other reviews, I see this is a spinoff. This means that I might find those details in the other series. If you do a spinoff, I think you should accommodate the readers who are starting off with this series with the pertinent details.

Didn't realize this was YA... there are a lot of Kardashian references and "I'm like so confused"... "wait, I'm lost" was a response the heroine gave to the evil genius??? Smh, so embarrassed.

Also, I didn't like was how much time was spent on The Grimlock family instead of our main character. I cant even say she is a main character in her own book.

One of the secondary characters is pregnant and unfortunately we get this comedy sitcom type story with her being annoying and an overly dramatic birth. This has been done in EVERY sitcom, in EVERY comedy sketch, and in EVERY romantic movie that involves pregnancy. So why would a female writer feel the need to do this to us again 🤨???

Other things that kept this from 5 Star rating:

Why would a young person with no actual experience be chosen for this job?

Doesn't ever give details on exactly what a gate keeper does or how it's considered magical.

So random suspicious guy shows up and then ask you to give him every single detail about an investigation... and she tells him. Wth?

If you were a supernatural creature... would you not seek to see if there were others... I don't like the idea of supernaturals thinking they are the only oones and being shocked when they hear about vampires, etc.

Overdone gay best friend.... why is this used so much???

Our herione:
1. Doesnt know her own staff numbers
2. Doesnt know Safety protocols
3. Doesnt research area she is going to work and live (where parents were killed)
4. Never heard of Reaper families

Gate keepers come off as the equivalence of a Mall Cop with a flashlight.

Magic and Supernatual creatures are in this story but they meet their demise because of a door with a broken latch... really???

2 Stars 🌟🌟- Decent. Has Potential. Possibly a good idea for a story but something could have been better. Sometimes it's because the author put too little or too much into the wrong parts of the story. Doesn't mean I hated it. Just means it was missing something to push it over the hump.

I really like the Grimlocks and am happy to see a new series with their characters returning. I think the death gate is an interesting twist and I like Izzy. Anything by AML is a great escape for me. Narration was good and paced well.

From the reviews I thought the book was going to be good, but it just wasn't. I was unable to get into the story, the main character was boring no sense of humour. I found the book very dry, even during the action scenes I forgot to pay attention. The male voices all sound the same, which is to say they all sounded like immature teens. I cannot tell if the writing was the problem or the narrator. I tend to lean toward the writing altough the male voices case it was both. The narrator wasnt bad other than that. I think the story would have been better with with included. I cannot reccomend this book as I found my self rolling my eyes and wishing it was over. I never finished the book I had to send it back.

Not worth the credit

I generally do not write reviews but I feel like I can not hold back this time.

The cover art for this book is amazing and what drew me to it in the first place.

Unfortunately, I had to stop the book at chapter 19 as I was just unable to take any more. The main character in the book (Izzy in her twenties) seems to be there solely to narrate the relationships of the Grimlock Family (main characters in another series). Most of the time she is clueless and trying to understand this family. As far as the Grimlocks go they seem to all be focussing on the daughter who is a spoiled, selfish brat that acts like a 5yr old and not a woman in her 20s.
I found all the interpersonal relationships very imature and irritating.

The narrator was clearly bored. I could hear a decent story but I think she is more suited to meditation audio so, I gave up. Save your credits.

This is an awesome book for young adults or adults. A fun fast paced thriller that will not disappoint you . It keeps the Grim Lock thrillers going.

I really do not understand the 4 plus stars. The heroine is whinny, immature and you want her fired from her job within the first 15 mins of the book. I generally like Amanda Lee's books, but I could not find anything likelable with the main characters, The dialogue sounded like spoiled high school kids, I could not finish the book. To be fair, maybe it picked up later and redeemed itself but for me it was just no...

While I enjoyed the new characters and a different angle on the existing Aisling Grimlock saga, it was extremely frustrating that the narrator put no effort into getting to know characters that have been established in 9 prior books. While I don't expect it to be exactly the same, you can't totally change the way they are read. Jerry and Aiden were the worst. I cringed whenever she portrayed them.

I really enjoyed listening to this. I hadn't read or listened to any of the Grimlock books so the characters were all new to me. I did find Aisling to be a bit much at times. I'm hoping that it is due to the pregnancy. It is a really interesting premise and I can't wait to read/listen to the next book in the series.

I received this audio book as a gift.

This is an amazing start to a new series. This Grimlocks never disappoint, and Izzy is a great addition! I can’t wait to read the next installment. Amanda M. Lee leaves the reader wanting more!