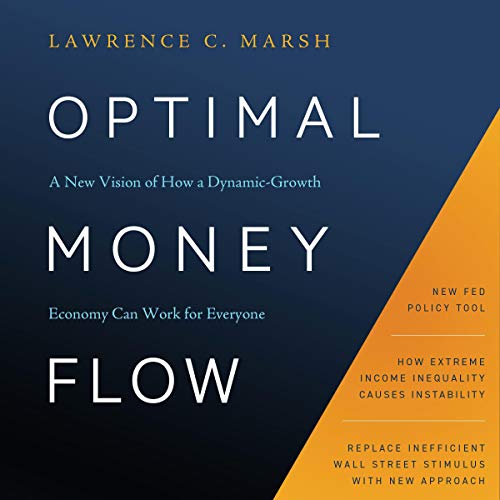 Extremes in income and wealth inequality are leading us closer to a highly insecure and unstable economy. Neoclassical, monetarist, Keynesian, and other economic paradigms have proven inadequate to explain this phenomenon.

While many books promote redistribution as an issue of fairness, Lawrence C. Marsh's Optimal Money Flow explicitly sets aside the fairness issue to argue instead that redistribution is imperative for economic efficiency, stability, and maximum economic growth. Marsh introduces his unique money flow paradigm as the replacement for other economic paradigms that have failed at addressing the situation we face today.

Marsh's money flow paradigm views the flow of money to the top of the wealth pyramid as inherent, inevitable, and inexorable to the free enterprise system. This new paradigm requires that government assume its rightful responsibility to direct sufficient money flow from the top to the bottom (like a heart pumping blood throughout the body) in order to maximize employment, economic growth, and efficient resource allocation. In a healthy economy, the money then flows naturally back up to the top in a circulatory flow.

Optimal Money Flow provides an abundance of stimulating, original ideas for readers who appreciate books at the intersection of economics and politics. One such idea is Marsh's ''My America'' personal accounts. This new policy tool would serve as an alternative to the Fed buying US Treasury securities in New York financial markets, which just lowers interest rates and boosts stock and bond prices. Instead, a ''My America'' Federal Reserve bank account would be created for every American, into which money could be injected directly to provide consumers with cash to stimulate demand when the economy slows. Conservatives will appreciate two aspects of this approach: The people, not the government, decide how to spend the money, and it does not increase taxes or add to the national debt, while it simultaneously avoids excessive inflation through prudent monetary management. It also uses less money and has a more direct and immediate impact on consumer demand than the purchase of US Treasury securities.

Lawrence Marsh sees government as the heart of the free enterprise system--where it does and should play an active part in maintaining and ensuring efficient and equitable resource allocation in an economy. Previous economic paradigms viewed government as an external, alien force outside the system, but Marsh promotes a very different approach. While he acknowledges there is efficiency in the market for ordinary goods and services, he sees contagion effects and inefficiency in many financial markets.

With higher levels of globalization, low levels of unionization, and more rapid technological change, a new type of business cycle has emerged--one in which rising middle-class debt and stock market bubbles have replaced price and wage inflation as the source of economic instability. Marsh believes government can contribute to the efficiency of the free enterprise system by better aligning marginal costs and marginal benefits, and that in the long run, government can greatly enhance efficiency, productivity, and economic growth.

Marsh also takes on the commonly held notion of a static fight over a fixed economic pie with the assertion that this view must be replaced with one of a dynamic process that maximizes the growth rate of the economic pie for everyone - by keeping the money flowing to all parts of the economy.

Optimal Money Flow's important message and unique proposals deliver a fresh view of the interconnectedness of the globe and an updated understanding of the underlying economic forces that shape our lives today - including international trade and how one country's decisions now impact the rest of the world.