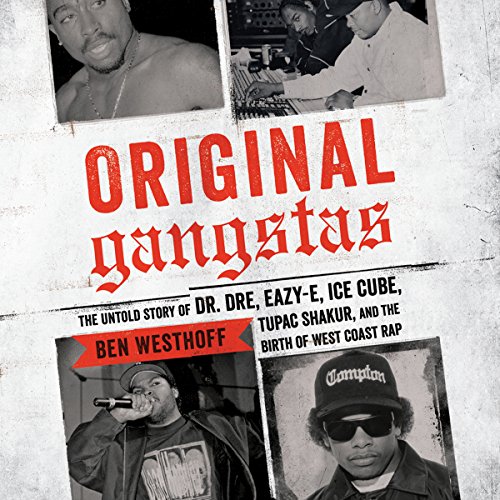 Written by: Ben Westhoff
Narrated by: J.D. Jackson
Try for $0.00

Amid rising gang violence, the crack epidemic, and police brutality, a group of unlikely voices cut through the chaos of late 1980s Los Angeles: N.W.A. Led by a drug dealer, a glammed-up producer, and a high school kid, N.W.A. gave voice to disenfranchised African Americans across the country. And they quickly redefined pop culture across the world.

Their names remain as popular as ever: Eazy-E, Dr. Dre, and Ice Cube. Dre soon joined forces with Suge Knight to create the combustible Death Row Records, which in turn transformed Snoop Dogg and Tupac Shakur into superstars.

Ben Westhoff explores how this group of artists shifted the balance of hip-hop from New York to Los Angeles. He shows how N.W.A.'s shocking success led to rivalries between members and record labels and eventually a war between East Coast and West Coast factions. In the process hip-hop burst into mainstream America at a time of immense social change and became the most dominant musical movement of the last 30 years. At gangsta rap's peak, two of its biggest names - Tupac and Biggie Smalls - were murdered, leaving the surviving artists to forge peace before the genre annihilated itself.

Featuring extensive investigative reporting, interviews with the principal players, and dozens of never-before-told stories, Original Gangstas is a groundbreaking addition to the history of popular music.

"Westhoff manages to knit together all the group'soutsized personalities, feuds, fist fights and drama into a stunning and entertaining read.... [His] detailed recounting of the long history of Death Row is required reading even for those who may think they know the story." ( New York Daily News)
"Insightful... Westhoff's history is especially relevant amid the ongoing Black Lives Matter movement." ( Booklist)
"This is the hip-hop book of the season, and it gives readers a thorough and engaging history of the West coast rap scene." ( Bookish)

What listeners say about Original Gangstas

One of the best ones yet!

Really good! Lots of information about what all went down in the rap world.

Some of the best narration I’ve ever heard

There were some real impressions of the different hiphop icons in this book that felt smooth and didn’t take me out of the experience. I learned some details I hadn’t heard before also. A1

Absolutely fascinating and in depth story of not only the main players of NWA but the lesser known members of the entourages including Daz, Warren G, Herron, Neckbone, Nate Dogg etc. Any fan of the 1990s west coast rap rap will be very pleased to listen and hear that the books goes so much further in depth than the movie Straight Outta Compton or even the Netflix series about the Biggie/Tupac murders.

An excellently written and researched book

Highly enjoyable and informative listening experience, a must for anyone interested in gangsta rap .

This book gives a incredible detailed insight of the life and progression of hip hop and rap music. I learned so much with this book. #Audible1

Originally I purchased this because I searched for keyword "Tupac" this was in the results and sounded like it was a good listen for my drive to work. it turned out to be a great story and very informative.

Excellent, rap needs more of these!

Would you listen to Original Gangstas again? Why?

Yes I would, there was so much information to absorb, but it was never overbearing. History and facts are abundant

Eazy-E was my first favorite rapper so I suppose you could say he was! Wish there was more on him but Ben did an excellent job of covering him.

Which character – as performed by JD Jackson – was your favorite?

Sure, but I'd probably take breaks to listen to the music the book talks about

The only criticism I could levy against this book is that it sometimes jumps ahead of itself, talking about things before they happen (in the context of the book) but otherwise this was a fantastic read and I am most impressed by the writers ability to tie in so many different characters so flawlessly! I've purchased 54 books on audible & this may be the best one yet!

I am a metal head and this book is great.

I didn't have high hopes for myself to like it. I am mostly a huge heavy metal person. I learned so much I feel I deserve street credit. But to be serious it was a great book might even listen to it again soon.

Reliving a moment in time

Great narration, took me back to the moment. Back to the time. Just as I remember it. I will be listening to this often. RIP Eazy, Pac, Biggie and the rest of the people who created the best music in my lifetime.

A must listen for fans of hip hop and rap

Thoroughly enjoyed this book from start to finish!! It will make you go back and listen to the classic west coast rap sings you've enjoyed for decades now, but with a better understanding of the lyrics music and production behind them. Great job by the author

I this was a great book. The author did great job in researching and telling the story. I recommend this book.

Great audio book, so much information that I did not know, during certain eras in hip hop.

This is a quibble admittedly but I bought 'Straight Outta Compton' on its release and it blew me away like it did the rest of young white America. In the thousand or so spins the cool and menacing rhymes of MC Ren were the high point for me and yet he never seems to merit much more than a footnote in books and films about Gangsta Rap and this book is no exception. Like I said it's a quibble but I hope Ren eventually gets the recognition and respect he deserves for his inimitable rhymes. Otherwise this is both in depth and fast paced and very highly recommended.

A must for any hip hop fan

so much better than a Hollywood wash over. If you love NWA, or Stright Out of Compton, you must hear this.

well written and a must read for any interested in the history of music of evolution of pop culture.